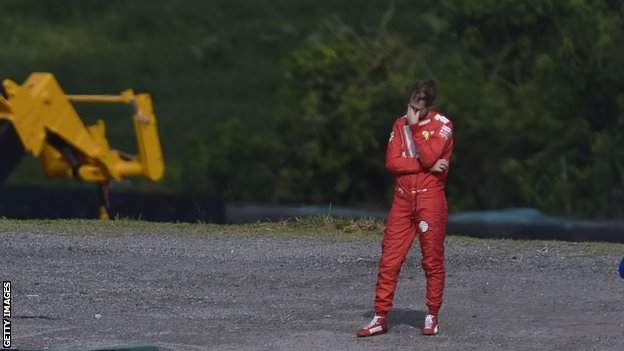 It wasn't meant to end this way.

When Sebastian Vettel signed to replace Fernando Alonso at Ferrari at the end of 2014, his dream was to emulate his childhood hero Michael Schumacher and win the world championship with the Italian team.

Instead, his time at Maranello has ended in frustration, unfulfilled. Fourteen wins, yes, but team and driver have fallen short of their ambitions, and to some degree the reason for that lies at Vettel's door.

As the years have ticked by on his Ferrari career, Vettel has looked less and less like the driver who serenely romped to four consecutive world titles with Red Bull from 2010-13.

The blinding pace has remained - but it has been seen less often. The mistakes have mounted. And last year, despite starting the year as Ferrari's designated number one, Vettel was beaten on every measure by a team-mate who was in only his second season in F1.

Should Vettel retire at the end of the year - and it seems a likely scenario in the apparent absence of any other competitive drives - his legacy will be a complex one.

Four world titles and 53 wins from 241 races are hugely impressive statistics that put him right up with the very greatest drivers ever to have competed in F1. Only Michael Schumacher and Lewis Hamilton have more wins. Only Juan Manuel Fangio in addition has more championships.

And yet, the questions will linger. Not over whether he was a great driver, but how great, and whether the statistics - which are never everything in F1 - flatter him to a degree.

The statement put out by Ferrari on Tuesday morning, after the news leaked late on Monday, begins to explain how the relationship between Vettel and the team unravelled.

"Financial matters have played no part in this joint decision," Vettel insisted. And the killer line: "In order to get the best possible results in this sport, it's vital for all parties to work in perfect harmony."

That harmony was clearly no longer there. And the relationship had started to fall apart long before the extravagantly talented Leclerc arrived on the scene and beat his senior partner on wins, points, pole positions and average qualifying pace last year.

After Alonso's time at Ferrari ended in bitterness, the Spaniard asking to be released from his contract because he had lost faith in the team's ability to deliver him the third world title he craved, Vettel brought a lighter air to Ferrari, and a sense of rebirth.

Alonso left at the end of a 2014 season that was Ferrari's least successful for 20 years, the team totally underestimating the new hybrid engine regulations.

But a regrouping was under way even before he left, the engine made a huge leap into 2015, and Vettel superbly won his second race with the team in Malaysia.

That first season was only ever meant to build the foundations for the future - Ferrari still had a lot of catching up to do - so to win two further races augured well.

Inside the team, though, there were already doubts. Vettel, some at Ferrari felt, was not on Alonso's level as a driver. They will have had a detailed view of this, but from the outside the telling piece of information was that Vettel's advantage over team-mate Kimi Raikkonen was nowhere near as big as Alonso's had been in 2014.

And in 2016, things began to go wrong. The season started well enough, but the renaissance of 2015 began to look like a false dawn.

The car was less competitive and, as Vettel grew frustrated, his driving became scrappy. In the second half of the season he started to make mistakes, trying to force the car to do things it didn't want to do, drive it in the way he wanted to drive it and not in the way its characteristics demanded.

He began to lose his cool, too, especially in a notorious incident in Mexico in 2016, when he swore at race director Charlie Whiting over the radio during the race because he was unhappy at Red Bull's Max Verstappen not being penalised for what Vettel perceived as a driving infringement.

The errors mount up

Into the start of 2017, this seemed less important. Ferrari had adapted best to the new regulations that stipulated wider, faster and more demanding cars, and they started the season with a performance advantage over Mercedes.

Vettel led the championship for much of the season, until a late surge by Lewis Hamilton and Mercedes overwhelmed Ferrari.

The failure that year was collective. Vettel made two key errors - an infamous red-mist moment when he deliberately drove into Hamilton behind the safety car in Azerbaijan, erroneously thinking the Briton had given him a 'brake test'; and an overly aggressive defensive swerve off the line in Singapore that took out both Ferraris, with Verstappen pincered between them.

That Singapore crash was followed by Ferrari suffering technical problems with their engine in the two subsequent races in Malaysia and Japan. Meanwhile, Hamilton was on a run of five wins in six races, and Vettel was left behind.

In 2018, again Ferrari started the season with a small but potentially decisive car advantage over Mercedes. And after 10 races Vettel had scored four wins and was leading Hamilton in the championship by eight points.

But then it all started to go wrong in remarkable fashion. Vettel was leading the German Grand Prix comfortably when it started to rain in the closing stages. Hamilton was closing in, and Vettel made what he described as "a small mistake with a big impact", sliding off the road and into the barrier in the Stadium section, handing victory and the championship lead to his rival.

You could hear the tears in his voice as he swore over the radio while the car was nestled in the wall, and after that he never recovered.

While Hamilton and Mercedes turned the screw, there was a series of further errors.

He collided with Hamilton as the Briton overtook him around the outside on his way to a brilliant victory against the Ferraris at Monza.

He crashed into Verstappen trying an over-optimistic overtaking move at one of Suzuka's most treacherous corners while attempting a recovery drive after a team strategy error in qualifying in Japan.

He earned a grid penalty for failing to slow down sufficiently for red flags in practice at the US Grand Prix and then spun while trying to pass Red Bull's Daniel Ricciardo in the early laps.

Undermined by a new star

This series of errors was particularly troubling. It would have been concerning for a novice to make so many with such regularity; let alone a four-time world champion, a driver of such quality.

Vettel admitted he needed to take a long look at what had gone wrong, but he's too classy and private a man to talk about what might have been causing it. The perception was that he was suffering under the pressure of trying to carry a team that he felt was not up to the job of taking on the might of Mercedes.

Team principal Maurizio Arrivabene was hardly a calming presence. Irascible and unapproachable in public, under his leadership the team were making a series of operational errors in races to add to - and perhaps partly cause - the mistakes being made in the cockpit. In the car, Vettel was too often having to question - and sometimes overrule - decisions made in the pits.

Vettel felt he was having to carry the team on his back, not unlike Alonso had done through his stint in 2010-14. But while in Alonso's case his driving only seemed to get better the bigger the pressure, Vettel seemed not to be able to take it so well.

Either way, in 2018, without the catalogue of errors, Vettel and Ferrari would have won the championship. It was an opportunity they allowed to slip through their fingers. Possibly 2017, too.

Last year, with Arrivabene gone, replaced by the calmer, more professorial figure of Mattia Binotto, was supposed to be a reset, but the spanner in the works was Leclerc. Vettel started the year as designated team leader, but the younger man was soon piling on the pressure, leading to a series of team orders controversies.

From mid-season, Leclerc began to cut out the mistakes that had been harming his qualifying performances, and started in front of Vettel for six races in a row. And Vettel's mistakes resurfaced.

He rammed into the back of Verstappen in the British Grand Prix.

He spun on his own early in the Italian Grand Prix, and crashed into Lance Stroll's Racing Point as he clumsily tried to rejoin the race.

He ignored team orders in Russia, refusing to let Leclerc back past after Vettel had been allowed to slipstream past at the start to ensure the Ferraris were running one-two ahead of Hamilton.

And then he precipitated a crash between the two Ferraris in Brazil, when he moved over on Leclerc as they disputed position in the closing laps.

Over the winter, Leclerc was signed to a new five-year contract, committing to Ferrari until 2024.

With Vettel's deal coming to an end in 2020, the message was clear - Leclerc was the new main man at Ferrari, and if Vettel was going to stay at the team, it would be on their terms, not his. And those terms were clearly not acceptable to a proud man with such great achievements behind him.

How, now, will those Red Bull seasons be viewed, and his career as a whole? At the time, the plaudits poured in for Vettel. But those prepared to look beyond the results saw how closely Alonso ran him in Ferrari machinery that was nothing like a match for Vettel's Adrian Newey-led designs, and drew their own conclusions.

Something else has gone missing in the last few years, too. At Red Bull, Vettel was a light and witty presence in F1, constantly joking in news conferences, and displaying a genuine and Anglo-centric sense of humour.

The pressures of Ferrari have worn that away - at least in public, even if he remains an immensely likeable and down-to-earth character, one of the brightest and deepest thinkers on the grid, and an engaging and thoughtful interviewee.

Does he have a future in F1 beyond this year? He does not have many especially attractive options for a man of his status - with Hamilton set to stay, Mercedes are said not to be interested; Red Bull, too - no need for Vettel when you have Verstappen, they say. McLaren? They seem to be leaning elsewhere. And that leaves Renault, who are in a restructuring process.

Vettel said in Ferrari's statement that he "will take the time I need to reflect on what really matters when it comes to my future", saying that the coronavirus crisis had "led many of us to reflect on what are our real priorities in life. One needs to use one's imagination and to adopt a new approach to a situation that has changed."

His final year in F1 or not, 2020 will not be an easy one for Vettel, his future - whatever it is - elsewhere. What used to be his team now fully focused on Leclerc.

And his legacy? The truth is that Vettel lacks the adaptability that gave the likes of Hamilton and Alonso - and Schumacher - the ability to extract the best from any car, no matter how difficult.

But on his day, on top form, in a car that suits his style, Vettel remains right up there with the very best.

505 comments
Back to top
unknown