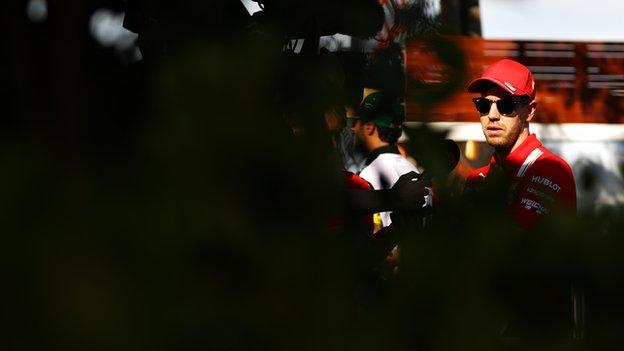 It's 7.30 in the morning and an online news conference organised with Sebastian Vettel is a few minutes old when it dawns on the Ferrari driver that there are a large number of British journalists on the call.

"I just realised it's an hour behind in the UK, so it's even earlier there," he says with a smile. "Sorry about that."

The four-time world champion is in his home in Switzerland, wood beams criss-crossing a white wall behind. He's wearing his team shirt; he doesn't reveal whether he still has his pyjama trousers on out of shot. But in the circumstances it seems unlikely.

"I like to start early so I have lots of time left in the day," he says. "I'm planning on going for a little bike ride later."

This is the 'new normal' in Formula 1, now the start of the season has been laid waste by the coronavirus. No-one can race, and factories are on shutdown. The drivers are busying themselves staying fit and sharp, and the sport's bosses are trying to navigate a way through the crisis, but the oxygen of exposure remains as valuable now as ever.

Some of Vettel's peers are satisfying their racing bug by taking the competition online - his Ferrari team-mate Charles Leclerc won a 'Virtual Grand Prix' a couple of weeks ago at his first attempt, and there is another one this weekend, on the date of what would have been the Chinese race.

Vettel, though, is a 32-year-old father of three pre-school kids, so he has plenty on his hands already. He is known for his old-style approach - he famously eschews social media - and has not been involved. At least not so far.

"The truth is I didn't have a simulator until a couple of days ago," he says, "so I have not been tempted because I didn't have the chance.

"I have heard a lot of things about it. So I thought I would get one and try. Generally, I am not going to foresee a career in sim racing. It is more something to try for fun. I have been playing some games but since I had kids it is not the first thing on my list to do.

"I have read some of the news and I have also read Charles did well on his debut, but I still consider it a bit more of a fun thing. I am aware some people take it very seriously and spend a lot of time there but I also enjoy doing a lot of things."

Vettel, as ever, is thoughtful and intelligent as he considers the impact of the coronavirus, not just on F1 but on society at large.

"I miss driving, the sensation of driving; there is nothing that can replace that," he says. "It is what we are all waiting for. (But) it gives you time to reflect. It is quite an intimate time with family. The circumstances are not nice but we are all trying to make the best out of it."

In the month since the Australian Grand Prix was cancelled on the eve of the first practice session in Melbourne, a lot has been going on behind the scenes in F1.

The sport's bosses have brought in a series of changes to help the sport weather what everyone knows will be a significant financial storm. And the drivers have also been discussing the way forward, through their umbrella group the Grand Prix Drivers' Association, of which Vettel is one of three directors.

He accepts that when F1 does finally return, it will likely be under very different circumstances.

"We have spoken about that a fair amount inside the GPDA," he says. "It is a very difficult one. It is a tough decision. On the one hand, you have the health of the sport, if you look at it from the business aspect; on the other hand you have the responsibility to the people in the paddock and of course most importantly the fans.

"Nobody likes to race in front of empty grandstands. It feels a bit odd. On the other hand, there is the question when is the right time to start racing again and whether a ghost race could be held a lot sooner than a race in the way we are used to it.

"We would all like get back to normal, not just for F1's sake, but for everyone's sake. But the best medicine will be to be patient. It is painful because I want to be back in the car and if I am selfish I want to race. But there are a lot of people who would like a lot of things.

"Probably at the beginning the first races will be compromised in terms of what we are used to. But hopefully not too much because we all want to race in front of crowds."

It is also likely that the season - assuming there is one - will be considerably shorter than intended. But Vettel says this should not be a reason to consider the championship devalued.

"I don't think it makes a big difference," he says. "A season is a season whether it has 10, 20 or 25 races; you still have to be the most consistent. In the end, the championship is the championship. With 10 races, there would still be a lot of things to get right."

On his future with Ferrari

The uncertain state of the sport has other impacts, too. Most of the top drivers are out of contract at the end of this season, and Vettel is among them. Normally, decisions as to whether to move or stay would be influenced by how the season started, for both driver and team. Now, it is likely they will have to be taken before any racing has happened.

Either way, Vettel says he not only wants to stay in F1 - but also to prolong his time at Ferrari, where Leclerc is already committed until 2024.

"I made that clear last time we spoke," he says. "I don't know when that was." The car launch? "Yeah, the launch."

He adds: "Whatever the deal will be like, it is whatever I and the team will be comfortable with. In terms of duration, normally the contracts I had in the past were all a three-year deal.

"I am one of the more experienced drivers but I am not the oldest and I don't think there is an age limit in this regard. It will depend on what we feel comfortable with.

"There is a high chance we will have to make a decision before there is the first race, because at the moment it looks like there will be no race before June or even July. We are all waiting. But the main priority at first is to ensure we are all dealing in the right way with the situation. We will make progress, but I don't think there is a real timeline."

On a topic of more immediacy, he is asked whether he will take a pay cut this year, as a number of other drivers have.

"It is definitely something I am talking about with the team," he says. "We don't know how the season will look and when it will start, but I have always kept whatever decision I made on this front with the team and myself and it will be the same this time.

"I am not keen to use this argument or point as a kind of image polish. What I have decided to do in the past I have done quietly and it will be the same right now."

A time to take stock

The coronavirus has changed so much for so many people, and F1 drivers, while they might live in a rarefied world, are no different in finding it has taken some getting used to.

"The big change is we don't have a normal day and daily routine," Vettel says. "Routines are good in life and sports is a way for most people to either exercise or to follow and to switch off and do something else. In this regard, it is very powerful.

"Normally one of the first things I check when I open the newspaper is the sports section. Now there is no news even if there are some interesting articles and time for reflection.

"It is a great time for all of us - not a great time, because the circumstances are rather sad - but a great time to reset and try to figure out what is really important for you. Hopefully these conclusions stick around for later."