All you need to know about the teams and drivers in 2022 (all facts correct as of the start of the season). 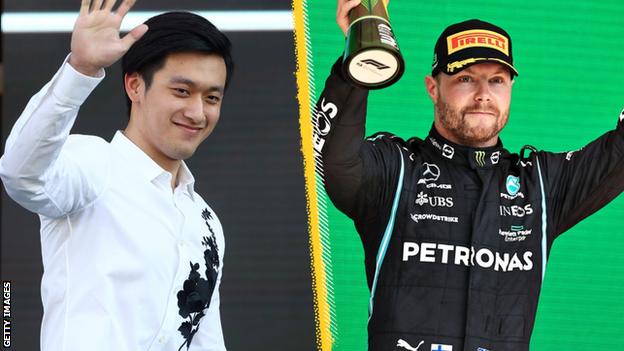 Alfa Romeo are in their fourth season in Formula 1 since taking over the Sauber name in 2019. The Italian-Swiss team struggled during the 2021 season and finished ninth in constructors' championship.

It will be a whole new driver line-up for Alfa in 2022 following Kimi Raikkonen's retirement from Formula 1 and the departure of Antonio Giovinazzi.

Valtteri Bottas, a 10-time race winner with Mercedes, makes the switch from the Silver Arrows, while Guanyu Zhou becomes Formula 1's first Chinese driver after making the step up from Formula 2. 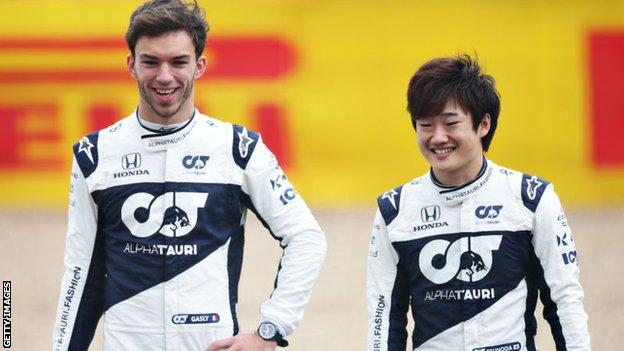 Red Bull's second team spent the 2021 season in a midfield battle with the likes of Alpine and Aston Martin and eventually finished the campaign sandwiched between those two teams in sixth place.

Pierre Gasly was one of the standout performers last term and enjoyed a podium appearance in Baku after a fantastic tussle with Ferrari's Charles Leclerc for third place.

The Frenchman is again partnered by Japanese driver Yuki Tsunoda, who just missed out on a podium place at the final race of the season in Abu Dhabi. 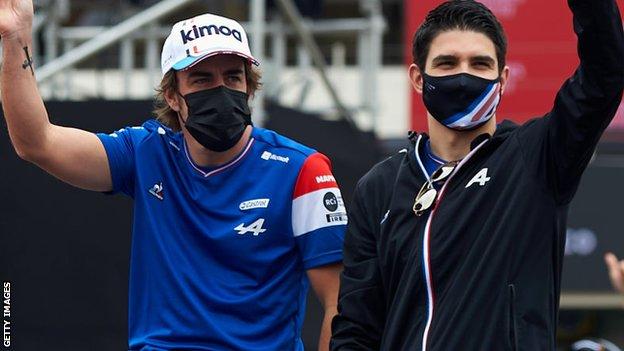 Alpine once again cracked the top five in the constructors' championship, ending the 2021 campaign with 155 points.

Esteban Ocon took the chequered flag at a thrilling Hungarian Grand Prix to secure his maiden victory in Formula 1.

Spaniard Fernando Alonso, who returned to the sport last year and is now the oldest driver on the grid at the age of 40, claimed his first podium since 2014 with a third-place finish in Qatar. 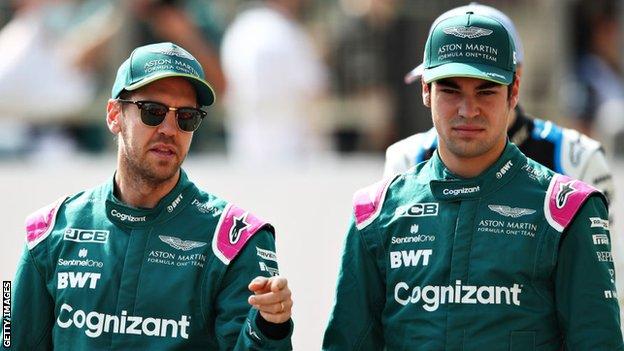 Last year was the first time the Aston Martin name had been on the F1 grid since 1960 and they ended the season seventh in the constructors' standings.

It was a mixed season for Sebastian Vettel as he began his post-Ferrari career with the British team, but the highlight for the four-time world champion was second place at the Azerbaijan Grand Prix.

Vettel will be partnered once again by Canadian driver Lance Stroll, who finished last season one place lower than his German team-mate in the drivers' championship in 13th. 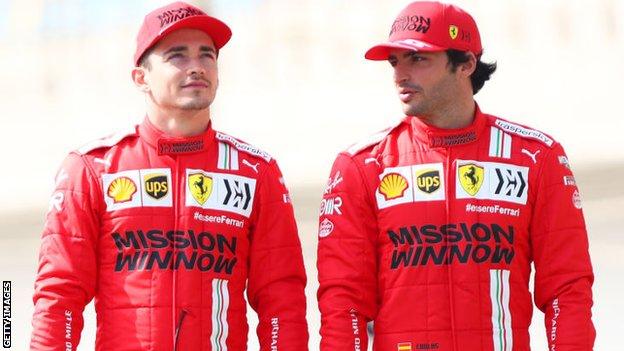 Ferrari were back among the top three teams in 2021 after a disastrous 2020 season - but there was still no race wins for the Scuderia to enjoy last year.

Charles Leclerc begins his fourth season with Ferrari this year but despite securing two pole positions in 2021, the 24-year-old has not won a grand prix since 2019.

Leclerc's Spanish team-mate Carlos Sainz is preparing for his second run out as a Ferrari driver and celebrated four podium finishes for the Italian team in 2021. 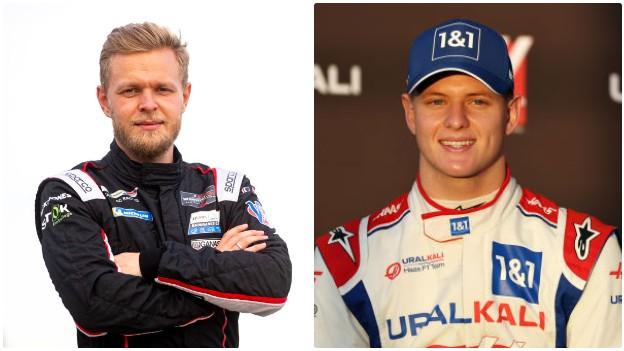 The 2021 season was a struggle for Haas as the American outfit finished bottom of the pile with the slowest car and zero points.

Their focus all along was in this year's car, so improvements are expected.

The team has, however, faced disruption after bringing in Kevin Magnussen as a driver after opting to sack Nikita Mazepin as a result of Russia's invasion of Ukraine.

Mick Schumacher will no longer be a rookie and the 22-year-old made it out of the first qualifying session on two occasions last year.

He was unable to compete in Q2 at Circuit Paul Ricard in France due to crashing at the end of Q1, but did qualify in 14th place for the Turkish Grand Prix four months later. 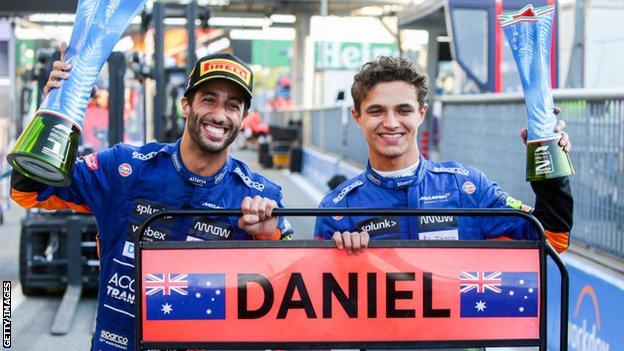 McLaren were locked in a battle for third in the constructors' championship with Ferrari during the 2021 season, but it was the Scuderia who cemented a top-three finish come the final race in Abu Dhabi in December.

There was jubilation and heartbreak for team-mates Daniel Ricciardo and Lando Norris last year. Fans finally got to see a Ricciardo 'shoey' when the Australian won the Italian Grand Prix after struggling early on to find his feet at McLaren.

While Norris made it a podium one-two at Monza, the Briton couldn't replicate Ricciardo's triumph at the next race in Russia.

After celebrating his maiden pole position on Saturday, Norris was then scuppered by a late downpour on Sunday which saw his hopes of a first F1 victory disappear. 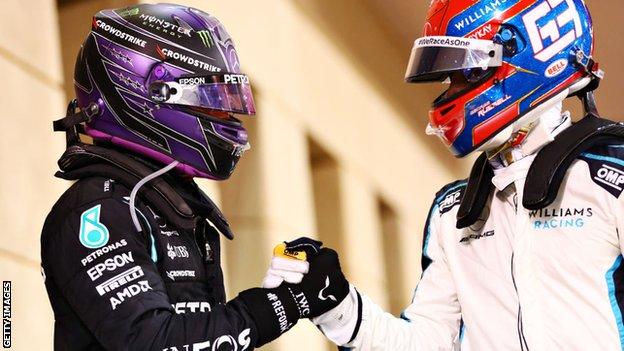 Mercedes were pushed all the way by rivals Red Bull but managed to clinch an eighth straight constructors' title in Abu Dhabi by 28 points.

Former Williams man George Russell is a new addition to the team for 2022 and has already had a small taste of life as Mercedes driver, stepping in for Lewis Hamilton at the Sakhir Grand Prix when he tested positive for Covid in 2020.

A record-breaking eighth drivers' championship was snatched out of the hands of Hamilton on the final lap of the season in Abu Dhabi in December.

Can the Briton regroup and claim the title he needs to overtake seven-time winner Michael Schumacher? 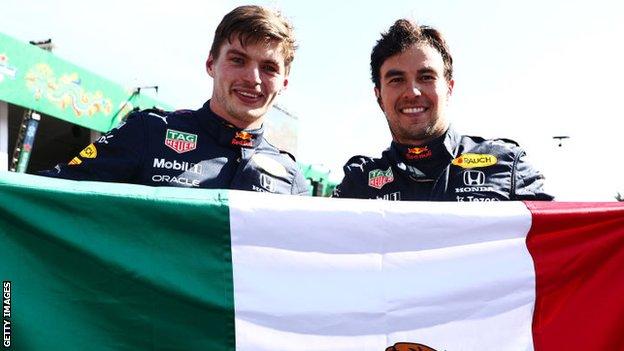 Red Bull team principal Christian Horner and Mercedes team boss Toto Wolff traded blows just as much as Max Verstappen and Lewis Hamilton during the 2021 season, but it was the Silver Arrows who secured the constructors' honour in the end.

Formula 1 will have a new champion on the grid in 2022 as Max Verstappen takes his place as the number one driver. The Dutchman won 10 races and secured 10 pole positions during a dominant display last year but the fallout from Abu Dhabi still remains.

Sergio Perez lines up for another term with Red Bull after finishing fourth in the drivers' standings in 2021. The Mexican took advantage of team-mate Verstappen and Lewis Hamilton's woes in Baku to toast his second victory in F1. 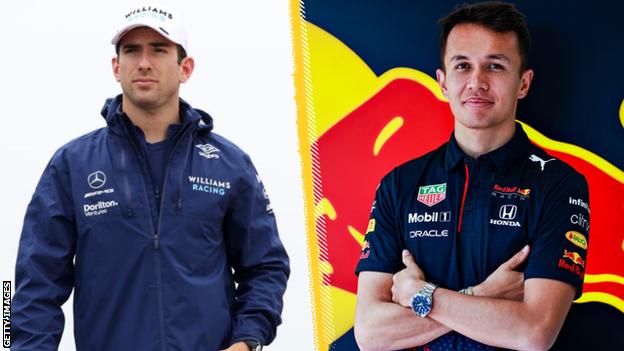 The 2021 season saw Williams end the year eighth in the constructors' championship with 23 points. However, the team suffered the loss of legendary boss Frank Williams, who died at the age of 79 in November.

Nicholas Latifi achieved his best placing in Formula 1 at the Hungarian Grand Prix when the Canadian converted 18th on the grid to a seventh-place finish.

Joining Latifi this season now that George Russell has moved up to Mercedes is Alex Albon. The Thai-British driver makes a comeback to the sport after losing his seat at Red Bull in 2020.