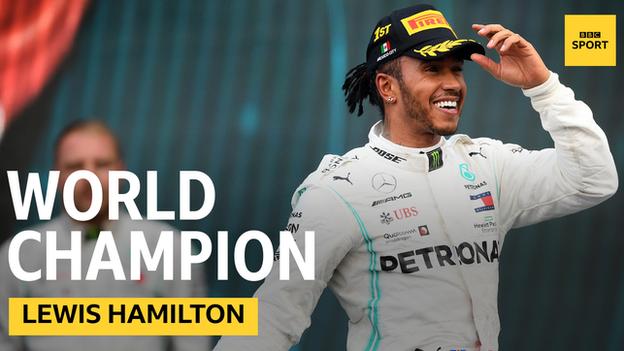 He becomes the second most successful Formula 1 driver of all time, one championship behind Michael Schumacher.

Hamilton failed in a valiant attempt to win the race by trying a different strategy to Mercedes team-mate Valtteri Bottas, but that did not matter such was his points advantage.

The Briton held off Max Verstappen for second as Bottas won in Austin.

Hamilton had said before the race that he was not thinking of sealing the championship in Texas, only of winning the race, and he drove with the fierce competitive instinct that has defined his season and career.

His decision to run long, do a single pit stop and try to hold off his rivals at the end did not quite work out - Bottas passed him with three laps to go - but it was a drive befitting the towering achievement he was to secure at the end of the race.

"It's just overwhelming," he said. "It was such a tough race. Yesterday was a tough day. I really just wanted recover and deliver the one-two. I didn't think the one-stop was going to be possible. I am filled with so much emotion. It is an honour to be up there with those greats.

"My dad told me when I was six or seven years old to never give up. I was hopeful I might be able to win but I didn't have it in the tyres."

Asked what he could go on to achieve in his career, Hamilton said: "I don't know about championships but as an athlete I feel fresh as can be. We won't let up, we'll keep pushing."

Hamilton has secured the championship with 10 victories out of the 19 races held so far this season, with two remaining in Brazil and Abu Dhabi. 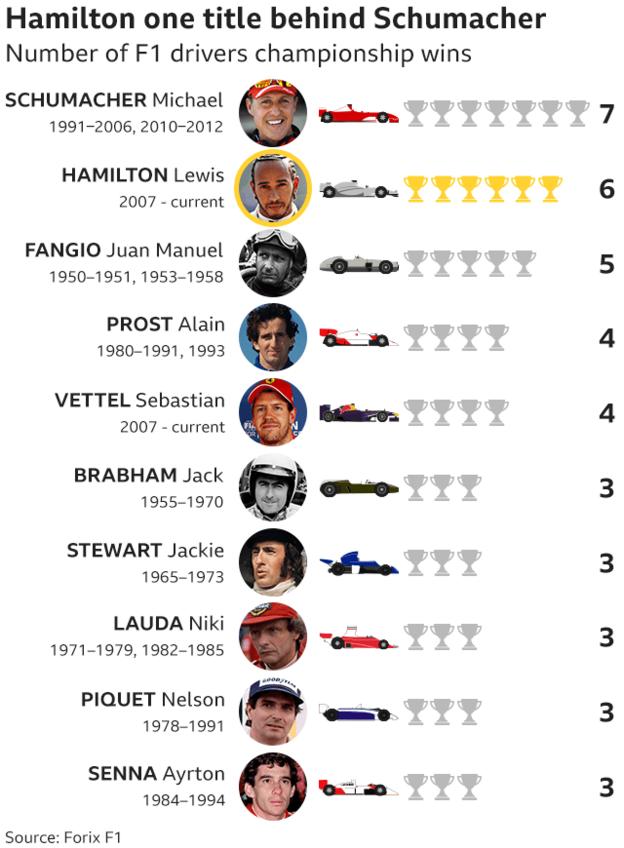 A determined drive to seal the dream

Starting fifth on the grid after a poor qualifying session, Hamilton passed Ferrari's Charles Leclerc for fourth at the first corner, and then made a brilliant overtaking move on the other Ferrari of Sebastian Vettel around the outside of Turn Eight, to run third behind Bottas and Verstappen at the end of the first lap.

Victory seemed at least a possibility for Hamilton, even given Mercedes' usual approach of favouring the lead driver to ensure a race victory.

And Hamilton decided to give it a go by staying out when Red Bull pitted Verstappen on lap 13, and Mercedes followed suit with Bottas a lap later to retain the lead, their stops locking both into a two-stop strategy.

Hamilton's task was now to run as long as possible on his tyres before his single stop and hope to have enough life left in his tyres when he rejoined to be able to defend.

Hamilton stopped finally on lap 24, giving him 32 laps to make it to the end on a set of hard tyres on a day when the rubber was wearing at a much higher rate than expected.

Bottas made his second stop on lap 25, one after Verstappen, and rejoined six seconds behind Hamilton, a gap he had 20 laps to recover.

It looked as if it would be easy, but Hamilton drove with control and skill to limit his losses, and it was not until the last five laps that Bottas was with his team-mate.

One passing attempt at Turn 12 failed on lap 51, when Hamilton ran Bottas wide on his outside.

But a lap later, after Hamilton had been delayed by lapping Pierre Gasly's Toro Rosso, Bottas used the DRS overtaking aid to ease past on the long back straight.

Hamilton's hopes of victory were gone, but the title was still secure, and he had four laps left to defend against Verstappen, which he managed to do with help from a yellow flag that forced Verstappen to slow down, as the Red Bull finished on his tail.

Ferrari's Charles Leclerc took a lonely fourth, the Italian car a long way off the pace, while Vettel retired from seventh place, after a sticky opening to the race, with a suspension failure after just eight laps.

Bottas, who went into the race with the faintest hopes of keeping the championship alive for another race, said: "Obviously big congrats to him. I personally failed with my target this year but he deserved it this year. He had some season."

Verstappen added: "Very impressive. what else to say? He is doing phenomenally. He has a great team behind him. I just hope we can challenge them next year."

Brazil in two weeks' time. A historic race track in a fervent atmosphere and an edgy city. Nothing at stake, just a battle for honour. 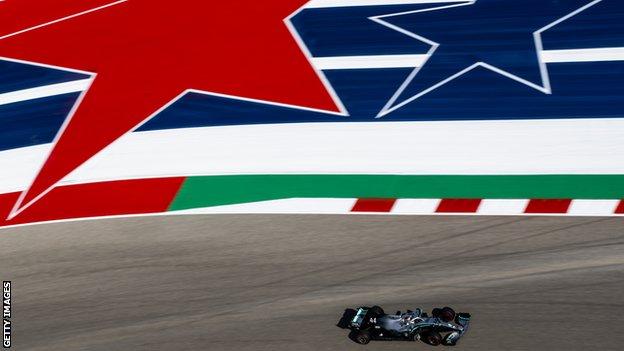