Lewis Hamilton cut a forlorn figure after qualifying at the United States Grand Prix, as he contemplated fifth position on the grid and what he described as "probably the worst qualifying I've had for a long time".

It is a measure of his competitiveness, and his constant quest for more success, that a man on the brink of clinching his sixth world drivers' title, which will put him just one behind all-time record holder Michael Schumacher, should care so much about a couple of bad qualifying laps.

Poor grid position or not, the mathematics are so heavily in Hamilton's favour heading into the race that it is almost inconceivable that the Briton will not end it with a third consecutive world title.

As long as Mercedes team-mate Valtteri Bottas does not win the race with Hamilton lower than eighth place, the championship is won. And if Bottas does not stand on top of the podium on Sunday afternoon, Hamilton will be crowned no matter what his result. 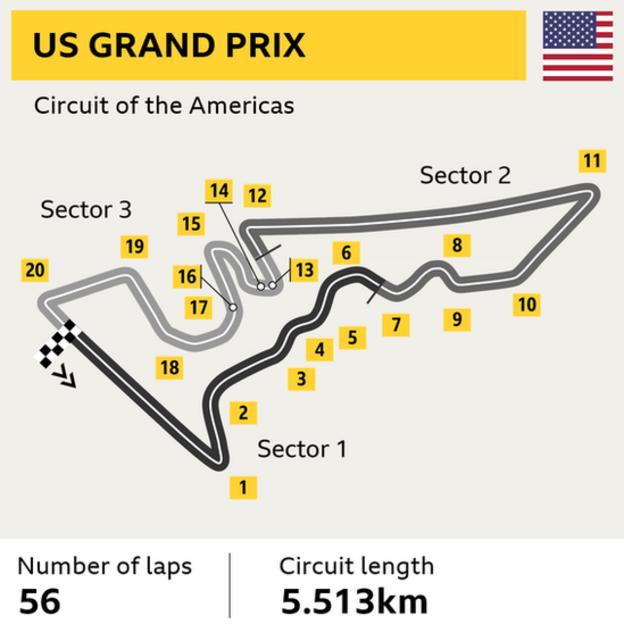 On Saturday, Hamilton said his mind was solely on "trying to figure out what went wrong and how I can get myself to the front" in the race, which he has won five times out of the seven appearances of this magnificent track on the F1 calendar.

"I don't look at this race as a particularly important," the 34-year-old said. "It's as important as any other race to me. It is not a stand-out, individual, important race for me. There are still two more after that.

"I will approach it exactly the same. I'm not looking to perform miracles. Things happen for a reason and today is a lesson learnt. Try to see if I can turn a negative into a positive tomorrow."

Of course, the championship can't not be on his mind, or at least at the back of it, but Hamilton's primary focus will be on getting himself to the front of the race.

This is no easy task from fifth on the grid, in the modern era of F1, with sensitive tyres that cannot be pushed too hard, but Hamilton won from fourth in Mexico only last weekend and he will believe anything is possible.

And if there is pressure, Hamilton says it is not affecting him.

"It has been the same pressure every year," he said. "[The circumstances] are always different. We had Brazil [2008] last corner, last race in Abu Dhabi with double points for a win [in 2014], multiple races left [in 2015, '17, and '18]. It doesn't make a massive difference. The pressure feels similar and I am not someone who pressure gets to."

As for Bottas, he knows it's effectively all over, but competitive pride forbids him from admitting it.

His pole in Austin - the first time since Hungary back in early August that a Ferrari has not started from the front of the grid - is his fifth of the year, and Hamilton has only four.

But Hamilton has won 10 races and Bottas only three and there is pride at stake and competitive instincts in play - as there are for Sebastian Vettel, Max Verstappen and Charles Leclerc, who will all fancy adding to their victory total for the year.

Bottas said: "He is leading the championship with quite a big margin and he doesn't need many points to do it. I'm sure he would like to win the championship in a good way but I will try my best to delay that and focus on my race rather than anyone else's." 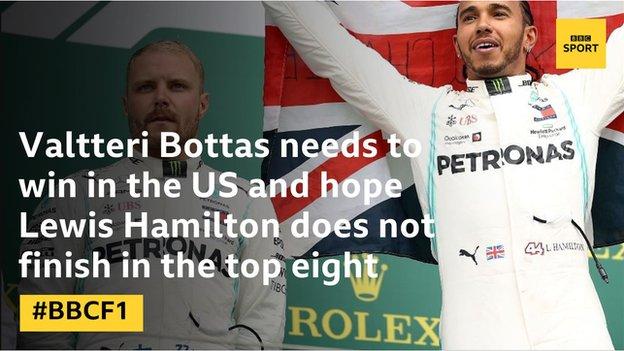 There were two world titles up for grabs by British sportsmen this weekend. One has slipped away, following the England rugby team's defeat by South Africa.

Hamilton could not watch the match, because it was on at 04:00 in Austin and he had qualifying to prepare for. But he said: "I watched some of the highlights at breakfast this morning. Obviously devastated for the guys, just because I know how hard it is to perform at the level we are performing at, to go such a long way and to have so much pressure, for them particularly to have so much pressure from back home and want it, and to within themselves want to do.

"I really felt for them because they have done such an incredibly good job. But obviously they were up against such a great team. And on days like that you learn from it and they shouldn't take it too hard on themselves and I hope they keep their spirits high and keep pushing for the future."

After a difficult qualifying day, Hamilton will approach what could be one of the defining races of his life with exactly that mindset. The strong likelihood is that for him it will turn out rather more successfully.

At the start of the US Grand Prix weekend, Formula 1 published its new regulations for 2021, aimed at closing up the field and making the racing more exciting.

The past few months have been characterised by intense debate on this matter, with the top three teams making clear that they had objections to the rules on a number of grounds - among them, too-extensive use of standard parts, the validity of the aerodynamic theories involved, fear of unintended consequences, the on-track behaviour of the cars that will be produced, whether the right areas had been properly attacked.

The big question was whether Ferrari would use its power of veto over the rules, but in the end the Italian team - the only one with a seat on F1's legislative body the FIA World Council - voted for the package.

Team boss Mattia Binotto said: "We are happy with the new set of regulations - or if not happy then we are at least convinced it is the right way to go.

"Did we consider [the veto] in the past? For us, it was more important to collaborate with F1 and the FIA to make sure that by the end of October we got the best package to be voted and I think that's where we put our focus and put our effort."

There were a number of considerations here. Ferrari continue to have concerns over some aspects of the rules, but the bigger picture was that in the months of negotiation that led up to the 31 October deadline they won important concessions from the FIA and F1 on standard parts and the amount of design freedom permitted in the regulations.

On top of that, using the veto would have meant losing it in the future - and they were more concerned to retain that power into the new chapter of F1. And there are discussions ongoing over the distribution of revenue under the new contracts the teams have to sign for 2021.

Binotto has described the 2021 rules as published as "a starting point" and he clearly believes that further concessions can be won over the coming months. This is something F1 is not ruling out, as teams begin to interrogate the new regulations as they work on their designs and come up with questions.

From F1 and the FIA's point of view, the important thing is that their over-arching vision has been imposed - 'ground effect' cars that produce a greater proportion of their overall downforce from under the floor, and should therefore be more raceable; tighter restrictions on design to reduce the possibility of the better-resourced teams extending an unbridgeable performance advantage; and most important of all - for everyone - a budget cap to rein in spending.

One of Ferrari's big concerns over 2021 was that what they saw as perhaps the biggest problem of all preventing close racing - the fragility of Pirelli's tyres - was not being addressed.

The drivers have been frustrated for some years now about the way the Pirellis behave, especially their tendency to overheat when pushed hard and when trying to attack another car.

This thermal sensitivity has a number of consequences; drivers are rarely on the limit in races to prolong tyre life to the required stint lengths and have to lap a number of seconds off the pace; they can sometimes not push flat out even for a whole qualifying lap; if an overtaking move is not done almost immediately, they are forced to back off and so passing is extremely difficult.

For a long time, this issue was being ignored by F1's bosses, but this year a breakthrough has been made. There is now an acceptance that the tyres' characteristics need to change, and also that F1 shares some of the blame for not making it clear to Pirelli what it wanted.

The requirements on the tyre supplier are laid out in a document called the 'target letter' and Lewis Hamilton spoke for many when he said on Thursday that getting this right was "really important".

"They've never had a good target letter in terms of what to deliver," Hamilton said, "so the GPDA [the drivers' union] is working closely with the FIA to make sure the target letter is written well. Hopefully this time we will have a better target letter and hopefully they'll be able to deliver a tyre which is more in the direction to help us race better."

While this conversation has been ongoing, Pirelli has been working on its 2020 tyre, in the context of its now-greater knowledge of the sport's future direction, and with the aim of making a step towards where F1 wants to be with tyre behaviour by 2021, with greater durability under stress.

These tyres made their debut in first practice in Austin, and it's fair to say things did not go that well.

Ferrari's Sebastian Vettel described the tyres as "a disappointment", adding: "There was no step forward. But it's pretty much done, the tyres are built for next year so that will be it."

His views were echoed by other drivers. McLaren's Carlos Sainz said the tyres felt "very weird and very… bad". Hamilton, asked for his opinion, sighed, and then said: "I've got to hold back and not say too much at the moment."

The test took place in unusually cool conditions and another complicating factor is that the tyres are bigger, so would create a performance loss on the current cars, which are not designed for them.

Pirelli F1 boss Mario Isola said that meant a definitive judgement would have to be deferred - a view echoed by senior engineers in the pit lane, one of whom said people "should not jump to conclusions" after Friday's running.

Isola added: "The first feeling is that the new package has probably a little bit less grip or peak of grip, and that it's more consistent. That is what we are looking for."

Nevertheless, it remains the case that many senior figures in F1 are yet to be convinced that Pirelli, which last year signed a new contract up to the end of 2024, can supply tyres with the characteristics for which the sport is now asking.

The onus is now on Pirelli to prove them wrong.