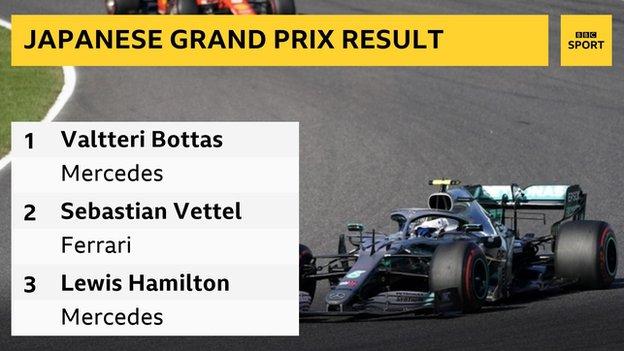 The result sealed the constructors' title with four races to go and, while Hamilton is not quite world champion yet, only Bottas can catch him.

It breaks the record set by Michael Schumacher and Ferrari from 2000 to 2004, and confirms this Mercedes team as the greatest in F1 history.

Briton Hamilton leads Bottas by 64 points and needs to be 78 clear of the Finn to win his sixth drivers' title at the next race in Mexico.

Mercedes team boss Toto Wolff said: "It has never been done before and that's why it feels great.

"It's F1, it's motor racing. Is it historic? I don't know. There are more important things out there but for us it feels great."

Mercedes' triumph will rub the salt into the wounds of Ferrari, who somehow turned a front-row lockout, with Vettel on pole ahead of team-mate Charles Leclerc, into a second place and a sixth.

Again, as so often this season, Ferrari's race unravelled as a result of driver errors - from both in this case.

Vettel moved forward in his position box before the red lights had gone out at the start, forcing him to have to stop and then go again, and allowing Bottas to spring past him into the lead at the first corner.

Beside him, Leclerc also made a slow start, if not as poor as Vettel's, and he had Red Bull's Max Verstappen alongside him through the first two corners.

In Turn Two, Leclerc slid wide and into Verstappen, pitching the Red Bull into a spin that ultimately led to its retirement, and damaging the Ferrari's front wing.

Leclerc tried to hang on but was forced to pit on lap three, and was only able to recover to sixth in a race that forced him to spend most of the afternoon picking his way past back markers.

At the front, it was immediately apparent that Bottas had too much pace for Vettel, but the interest was in the divergent strategies of the three top runners.

Ferrari blinked first, pitting Vettel on lap 16 and putting the German on a two-stop strategy. Mercedes responded by pitting Bottas on the next lap to ensure he retained the lead.

They left Hamilton out and told him he was going for one stop on lap 21 for medium tyres.

But the high tyre degradation on a 'green' track washed clean on Saturday by Typhoon Hagibis forced them to change their minds and he ran a divergent two-stop, stopping 11 laps after Vettel and hoping to chase him down on fresh tyres in the closing laps.

Hamilton complained about the strategy over the radio, asking how he had lost so much time, why he was not given the hardest tyres and allowed to try for a one-stop strategy, and what he needed to do to win.

When Hamilton did stop on lap 42, he had 10 laps to pass Vettel. He caught him within three laps, but the Ferrari's straight-line speed advantage made it too difficult to pass and the Briton had to be satisfied with third as his team-mate won his first race since the Azerbaijan Grand Prix in April on a weekend when he was quicker than Hamilton pretty much throughout.

Vettel said afterwards that he suspected Mercedes were too strong for Ferrari and would have found a way to beat him on strategy with two drivers against one - even if he had not made the mistake at the start.

But Leclerc's incident with Verstappen and Vettel's poor start put Mercedes in that position and Ferrari again have reason to rue errors that cost them dearly.

Vettel's start was investigated but the officials decided it was "within the acceptable tolerance of the F1 jump start system which formerly defines a jump start" and he was not penalised.

Leclerc was penalised five seconds for his collision with Verstappen and a further 10 seconds for Ferrari delaying their decision to bring him in to replace the front wing that was damaged in the incident.

Together they demoted him from sixth to seventh, behind Renault's Daniel Ricciardo, with McLaren's Carlos Sainz Jr in fifth.

However, Racing Point protested Renault, claiming that their car has an automatic brake-bias adjustment system. The stewards ruled the protest was admissible, the cars' of Ricciardo and team-mate Nico Hulkenberg, who finished 10th, had their steering wheels and electronic control units impounded and the FIA will investigate the matter further for a judgement at a later date.

A word for Albon

With Verstappen out of the race, fourth place was taken by his team-mate Alexander Albon, who had excelled in qualifying by matching the Dutchman's lap time in qualifying on his first experience of the Suzuka track.

Albon lost ground to the two McLarens when he was delayed by the Leclerc-Verstappen incident and collided with Lando Norris' car while passing the Englishman early in the race.

However, he then caught Sainz and drove a steady race to consolidate his position.

Mexico in two weeks' time. Can Hamilton clinch a sixth title there? It's possible, but it won't be easy.

669 comments
Back to top
unknown