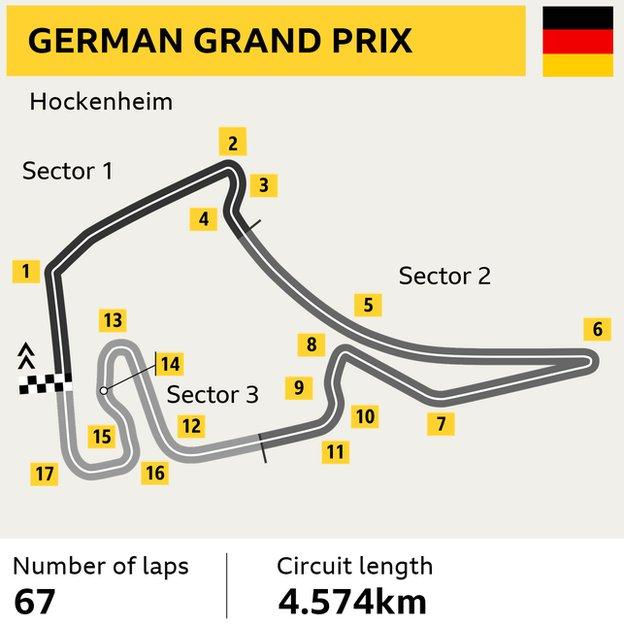 Sebastian Vettel will be hoping for home comforts when Formula 1 heads to Germany this weekend, but will need to improve his record there if he is to get his season back on track.

The Ferrari driver crashed out of the British Grand Prix last time out after running into the back of Max Verstappen's Red Bull.

Rival Lewis Hamilton went on to win his home race - his sixth win there.

By contrast, Vettel has won the German GP just once before.

Last year, Vettel started the race on pole but crashed out from the lead. It was a race that also appeared to signal the start of a catalogue of race-costing errors he has made over the last 12 months.

Vettel is 100 points behind drivers' championship leader Hamilton, who has backed Vettel to rediscover his form.

"I absolutely believe he'll rebound," the 34-year-old Briton said. "You look at the greats playing tennis and he is one of those [in F1]. He's had a difficult race, but he's a four-time world champion.

"He will recover. He will redeem himself if he feels he needs to, and he will come back stronger the next race. That's what great athletes do."

What's the form guide before the race?

It is almost a year since 32-year-old Vettel, who has slipped to fourth in the championship, last won a race.

That was at the Belgian Grand Prix on 26 August when he beat pole sitter Hamilton to victory.

Hamilton heads to Germany this weekend looking to claim a sixth win in his last seven races and increase his drivers' championship lead, which stands at 39 points.

Hamilton is the most successful current driver in Germany with four wins. No other active driver has won the race more than once.

Ferrari's Charles Leclerc, meanwhile, will be hoping to convert a run of podium finishes into a first career victory. He has finished in the top three in each of the last four races.

What have the drivers been up to since the British GP?