We have had eight races in the 2019 season and Mercedes have won them all, Hamilton taking the chequered flag six times, including the last four in a row.

After a routine and frankly dull start-to-finish victory in France, which finished with Hamilton 18 seconds clear of team-mate Valtteri Bottas, the reigning world champion is looking unstoppable.

He now has a 36-point lead over Bottas, his advantage over Ferrari's Sebastian Vettel in third is already at 76 points, with Red Bull's Max Verstappen in fourth a further 11 points adrift.

A strong track for Mercedes, but not last year

Mercedes had a front-row lockout in 2018 but the race itself was a rare disaster for the Silver Arrows as Bottas had to retire on the 13th lap because of a hydraulics issue.

The team then chose not to pit Hamilton during the resulting virtual safety car period, with chief strategist James Vowles apologising to the Briton over team radio as their chances of a win were severely hampered.

But it all counted for nothing anyway as Hamilton's day ended on the 64th lap with a fuel pressure problem as for just the third time in eight years both Mercedes cars failed to finish a race.

That left Red Bull's Verstappen to win at the Red Bull Ring, as he held off the then-Ferrari pairing of Kimi Raikkonen and Vettel, who finished second and third respectively.

It proved to be one of the most popular wins of the season with a sea of orange-clad Dutch fans cheering on the Red Bull man in his team's home race.

This year's race could well prove to be an emotional one as it will be the first race to be staged in Austria since the death last month of legendary Austrian driver Niki Lauda, the former three-time world champion.

The location, a two-hour drive away from the capital Vienna and surrounded by green Styrian mountains, is one of the more picturesque of the season.

But in previous years there have been moments of absolute chaos to shatter the calm.

Back in 1987, when the track looked completely different and was known as Osterreichring, there was carnage as the race had to be started from scratch three times.

The first start saw a multi-car crash, then a slow-starting Nigel Mansell caused a 12-car pile-up at the second attempt.

The third start, two hours after the original one, was clean with the repaired Mansell going on to take an unlikely victory. But the drama was not done then as Mansell, being taken back to the podium and standing up in the back of a little pick-up truck, then managed to smash his head on a steel girder.

He was left with a huge bump on his head and his pain became even worse when BBC commentator Murray Walker inadvertently prodded the wound in a post-race interview, causing the Briton to wince in agony.

That proved to be the last grand prix in Austria for a decade before the circuit was rebuilt and renamed as the A1 Ring.

One of the most controversial finishes to a Formula 1 race came in Austria in 2002 when Ferrari's Rubens Barrichello, under team orders, let Michael Schumacher pass him in the final straight, only metres from the chequered flag.

An embarrassed Schumacher even let the Brazilian stand on the top step of the podium as the German national anthem played and handed the winners' trophy to Barrichello.

Schumacher again won the next year, before another long gap in the race's history, with the track updated further before it returned in its current guise in 2014.

There was more opening-lap drama in 2015 when Fernando Alonso and Raikkonen collided, with Alonso's McLaren ending up in the barrier and on top of Raikkonen's Ferrari.

This year's race will be held over 71 laps of the 4.318km track and the cars will blast along three straights, separated by a pair of uphill right-handers before the drivers head downhill and face a series of quick corners. 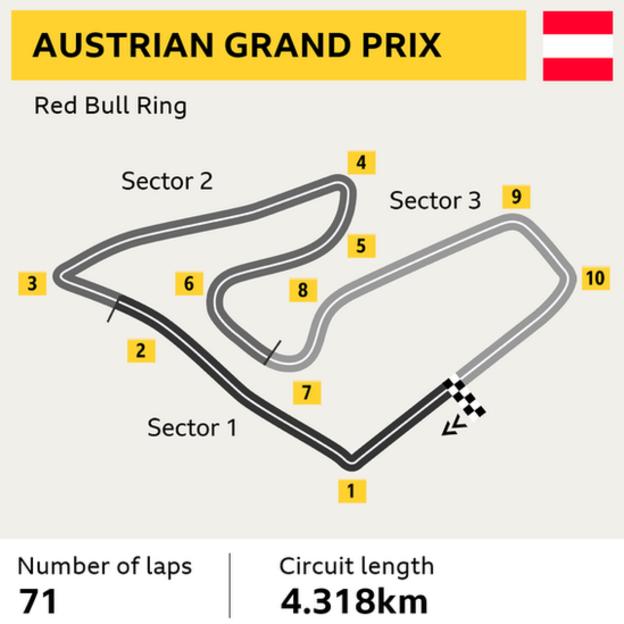 How to follow the Austrian Grand Prix on the BBC