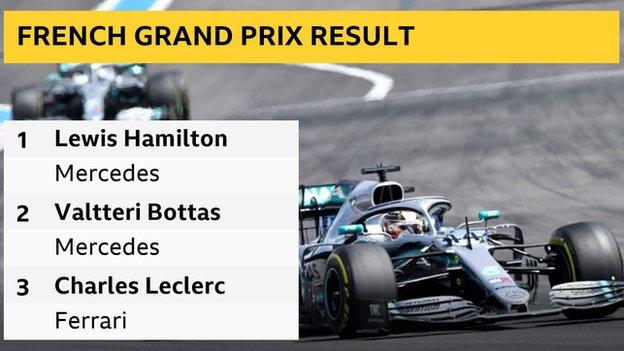 Lewis Hamilton took a stranglehold on the world title with a dominant victory in the French Grand Prix.

Hamilton was in a league of his own, even over his Mercedes team-mate Valtteri Bottas, as the 34-year-old Briton took his sixth win in eight races.

The five-time champion leads Bottas in this year's title race by 36 points - a win and a fifth place - after just eight races.

Bottas finished a distant second, holding off an attack from Ferrari's Charles Leclerc on the final lap.

Red Bull's Max Verstappen and Sebastian Vettel's Ferrari took fourth and fifth and the only minor irritation for Hamilton was that Vettel managed to steal the point for fastest lap, by virtue of a late pit stop for fresh soft tyres.

A Sunday afternoon drive for Hamilton

Hamilton was in control from the start, after converting pole position into a lead at the first corner.

He set a steady pace in the opening laps as he looked after his tyres with a full fuel load, but as the pit stops approached, Hamilton piled on the pressure.

He extended his lead over Bottas by nearly five seconds in eight laps before the Finn was called in first for his pit stop on lap 23 to ensure he covered Leclerc, who had stopped two laps before.

Hamilton followed Bottas in, and re-emerged with an even bigger lead of 11 seconds, and the race was effectively over.

It was a generally soporific race, with little in the way of competitive tension among the front-running cars, and the championship looks to be heading in the same direction.

Hamilton and Bottas were evenly matched in the first few races of the season, but the Briton has found another gear in the past three events and his team-mate currently looks a bit breathless as he tries to keep up.

Anything going on behind the Mercedes?

Leclerc had a lonely race behind the Mercedes in third, unable to keep pace with Hamilton and Bottas for much of the afternoon, but comfortably able to fend off Verstappen behind.

The Ferrari closed in on Bottas in the final laps as the Finn battled tyre blisters, which also affected Hamilton. But Bottas did just enough to hold off Leclerc on the final lap.

Ferrari had hoped that they might be able to get Vettel ahead of Verstappen by running him long, once the German had moved up to fifth place past the McLarens from his seventh place start.

But a plan to run long and attack Verstappen on fresher tyres at the end of the race was scuppered when Vettel locked a front tyre into Turn One just three or four laps after agreeing the strategy with his engineers.

He immediately got on the radio to say they needed to pit because the tyre was too badly damaged to continue with the plan.

That meant Vettel had tyres that were only five laps fresher than Verstappen, who was easily able to hold off the Ferrari - in fact Vettel slowly dropped back, rather than gaining on the Red Bull.

Ah! Some action (on the last lap)

Behind the big five, McLaren drivers Carlos Sainz and Lando Norris converted their excellent third-row grid positions into sixth and seventh places at the head of the midfield for much of the race, with the Spaniard ahead of Norris, who had qualified in front, as a result of passing him at the start.

Sainz took a comfortable sixth but Norris began to struggle in the closing stages as his car lost hydraulic pressure, a problem that affected his gearshifts and steering and prevented him using the DRS overtaking aid.

That allowed Renault's Daniel Ricciardo to close in, before Alfa Romeo's Kimi Raikkonen and the second Renault of Nico Hulkenberg also joined the fight.

Norris was given some breathing space when Ricciardo made a mistake and lost time with four laps to go.

But the Australian closed in again - and with no DRS, Norris was helpless as the Australian, Raikkonen and Hulkenberg pushed him down to 10th on the final lap.

However, stewards handed Ricciardo two five-second penalties after the race for going off the track to gain an advantage, demoting the Australian to 11th.

F1 moves on to the Red Bull Ring in Austria next weekend, where the long straights and general circuit layout might give Ferrari a chance to challenge Mercedes more closely... Might.

Lewis Hamilton: "It has been a really good weekend - I have been racing a long time and it never gets old and it is such a challenge out there, and finding the edge and building the gap."

"We are creating history together and so proud to be part of this team. I am hot. It is a beautiful day and the track is awesome and there is some technical areas.

"It wasn't easy at all and everything is on the edge. I had quite big blisters on the front two tyres - but this has been the best start of the year."

Charles Leclerc: "I gave it everything. I felt OK with the car but the Mercedes were too quick early on. The first run was quite OK, and on the second run I was about tyre management and towards the end I was catching Valtteri. But there were not enough laps for me to try something.

"But with where we were on Friday, today is a great day for us. In the last two laps I was catching quite quickly."

Sebastian Vettel: "Fastest lap was straight forward - it's not the first time we've seen it. It was quite tight at the end, we seemed to have a problem with charging the battery in the last lap, otherwise it should've been a straightforward race.

"We know it's straightforward in terms of speed - we are fast on the straights and not so much in the corners.

"This weekend, the biggest aim was to close the gap as much as possible and we failed. We have to understand why some of the bits we brought didn't work and hopefully we can try again and the track layout in Austria next week will go our way.

"The track here is very hot, and the more grip you have, the more you can look after your tyres and that seems to be favouring Mercedes more than us."