Lewis Hamilton tightened his grip on a sixth world championship following the eventful scenes at the Canadian Grand Prix.

Sebastian Vettel will feel his name should be etched in stone as the 2019 Montreal victor after securing his first pole position of the season.

The German dominated proceedings from the start but in a split-second of lap 48 frenzy, the FIA deemed Vettel's return from the grass of the tricky Turn Three/Four chicane an "unsafe entry" and a five-second time penalty was applied for "forcing another driver [Hamilton] off the track".

That proved costly as Vettel crossed the line first, but was demoted to second to give Hamilton his fifth win of the season and his third in a row.

"Ultimately it's not the sport that I fell in love with when I was watching," was Vettel's scathing assessment of the decision after he had originally refused to take part in the post-race interviews and then switched around the signs signifying which car had finished first and second.

Opinion is still divided on whether Vettel deserved his punishment or whether it was a race win stolen from the Ferrari man.

Formula 1 officials will meet on Friday to hear Ferrari's attempt to overturn the penalty - the Italian team lodged a request for stewards to review the decision to penalise Vettel five seconds.

As it stands, Hamilton has extended his lead at the top of the drivers' standings to 29 points over Mercedes team-mate Valtteri Bottas, with third-place Vettel needing to overhaul a 62-point deficit. 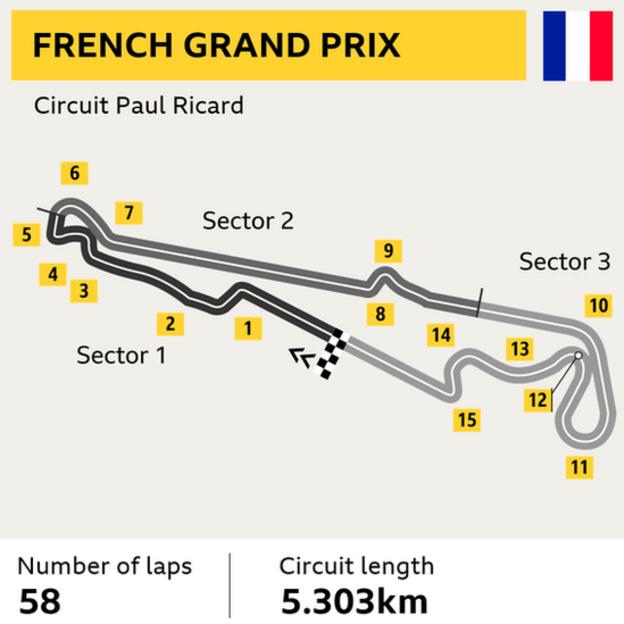 If Vettel is looking to rekindle his passion for F1, maybe a weekend in France is not the best place.

The French Grand Prix made a return to the calendar in 2018 after a 10-year absence, with Circuit Paul Ricard chosen to host the comeback instead of 2008 venue Magny-Cours.

Qualifying produced a familiar scenario: Hamilton on pole, Bottas in second and Vettel's Ferrari camped on the second row.

As championship leader, Vettel needed a good start into the first corner to make up ground on the two Mercedes.

Just one problem... the four-time world champion locked-up in his eagerness to hunt down Bottas, resulting in a clip of the Finn's rear left tyre and the Mercedes driver ending up the wrong way round.

Both drivers lost position and tumbled down the field. The day went from bad to worse for Vettel as a five-second penalty was given to him for causing the crash.

Despite a fine drive to climb back through the field, he finished in fifth place and handed back control of the drivers' championship to race winner Hamilton.

With Ferrari's need for a first win in 2019 getting ever greater, could a double dose of redemption be on the cards for the under-fire Vettel?

Well, team boss Mattia Binotto said the track would not suit their car.

"Paul Ricard was a tricky circuit for us last year and we know this kind of track isn't particularly favourable for our package," he said.

Mercedes have won all seven races in 2019 but boss Toto Wolff said Ferrari's straight-line speed advantage could be crucial.

"We expect another tough fight in France," Wolff said. "The circuit features some similarities to Montreal and the long straights will present a challenge for us.

"However, unlike Canada, the corner characteristics are spread across a range of speeds, which should play to our advantage. We're looking forward to the chance to put a few things right again."

Circuit Paul Ricard needed a 21st century makeover before it returned to the F1 calendar in 2018.

Having last held a F1 grand prix in 1990, organisers decided a jazzy track design was the way forward.

Unfortunately, too much jazziness can have the opposite effect and the bold red and blue striped run-off areas went down like a lead balloon.

Some fans described the design as an "eyesore", "migraine-inducing" and "like a magic eye picture with added nausea".