This one has been a long time coming.

Sebastian Vettel - not that long ago the pole position king of Formula 1 - had not started from the front of the grid since the German Grand Prix last July, 17 races ago. But when he finally broke the duck, he did it with style.

Vettel did not just edge Lewis Hamilton's Mercedes into second place, he smashed his lap out of the park, ending up with an advantage of 0.206 seconds - a sizeable gap at one of the shortest tracks on the calendar.

It was, Vettel admitted, "a big relief", and it was appropriate it came on a track that has had a special connection with Ferrari ever since the legendary Gilles Villeneuve scored his maiden victory on his home track's debut on the calendar back in 1978.

It was Ferrari's first pole since Vettel's team-mate Charles Leclerc set the pace in Bahrain five races ago. And Mercedes have utterly dominated the start of the season, taking victories in all six races.

But that statistic was always a slightly misleading one, and although this was a turnaround in form, it was not entirely unexpected.

Ferrari should have had at least one and possibly two victories chalked up already, and this track was always likely to favour them.

The big one that went missing was in Bahrain, the second race of the season, which Leclerc dominated until suffering engine problems late in the race.

Then, two races later in Baku, Leclerc was again looking the man most likely, only to toss his chances away with a crash in qualifying.

Until this weekend, a pattern had looked like it might be emerging at Ferrari. Although Vettel was five-one up in qualifying, the underlying pace was that when the Ferrari as a car was competitive, it was Leclerc who looked the faster driver. 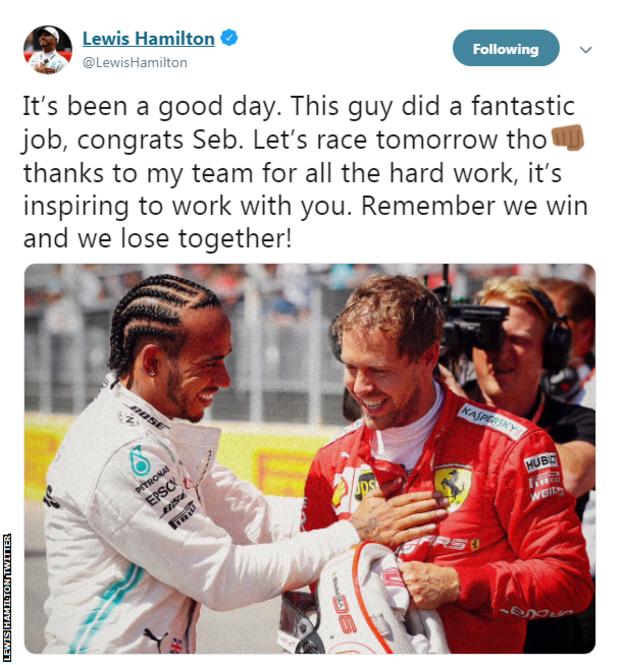 Not in Canada, though. The two men were evenly matched until final qualifying, only for Leclerc to fall away while Vettel channelled the spirt of his dominant Red Bull days to produce a lap for the ages.

"I had to pace myself in the first two corners," Vettel said. "But after that it was really coming alive and it is what you need around here - full confidence to hammer the kerbs and floor the pedal.

"It was just getting better. I could see I was a lot faster into the last corner and maybe I did not go all out into there but I was able to go a little bit faster and it was enough. I really enjoyed the lap and it is a great feeling when it comes together like today plus you get the result."

This is Vettel all over. When the car is not the way he likes it, he can look relatively ordinary. But when he feels it the way he wants it - a strong front end and a stable rear - and he gets what he calls "the rhythm", he is transformed, and there are few - if any - quicker. This was one of those days.

"Obviously it was a great day and I am very happy with the result," he said, "but we have a lot of work of ahead and we have to keep our feet on the ground.

"Overall, after the last weeks and months, it is good to have a result like this and it is important to be there when there is the chance and tomorrow hopefully there is another chance."

Can Ferrari bring it home?

As Vettel hinted, Ferrari's issue recently has been delivering when they should. A number of opportunities have gone missing in the last year or so, through either driver or team errors. Most embarrassingly for Vettel - but certainly not exclusively - when he crashed out of the lead of his home race 24 hours after that last pole.

"Very happy for the team," he said. "The right message for the guys. We have been criticised many times this year - sometimes right, sometimes not right - but that's how it goes. Good result today but we want to confirm it tomorrow.

"Mercedes is very quick but we are starting ahead and hopefully we can stay there and give them a very hard time.

"We have good pace here but we know Mercedes are very strong, especially over the (race) distance."

Mercedes have been saying for a while this was a race they were worried about, and that is all in the nature of the two cars and this track, which rewards straight-line speed over cornering performance.

Vettel said: "We felt more comfortable in general this weekend. We were able to find a bit more confidence. But we are still looking at the same thing. So the straight-line speed is very good but we are paying the price in the corners and not able to produce the same grip as Mercedes, which here is not as bad (for us) as other places."

That advantage on the straights - where Hamilton said Ferrari were gaining 0.5secs on Mercedes - is not as pronounced in race trim, and the world championship leader will not take this lying down.

"The difference," said Hamilton, "will be looking after the tyres and seeing how close we can hold on and hanging in there until we can start pushing and try to race. They are so quick on the straights."

Hamilton recovered impressively from his crash in second practice, which cost him all his race preparation on Friday afternoon.

"Really happy I was able to be on the front row and between them," he said. "I gave it absolutely my all. The first lap was really good and the second lap was a little bit better but the straight was where we lost it.

"In race conditions maybe that's different but I didn't do P2 yesterday due to a mistake so to be back up here and fighting for pole was a great recovery from me and my engineers.

"I have to stay on (Vettel's) toes, keep the pressure on him, try to push him to make his tyres drop off faster than ours."

He has a bit of added jeopardy, though, over his engine. Mercedes have introduced a new specification this weekend, and one of them blew up in the Racing Point of Lance Stroll in final practice. Mercedes F1 boss Toto Wolff admitted that was a concern for the race.

What happened to Leclerc and Bottas?

Hamilton starts the race sandwiched between the Ferraris and he acknowledged this could make life difficult for him and Mercedes on strategy, with team-mate Valtteri Bottas down in sixth after a poor qualifying.

"The Ferraris can work together as a team to capitalise if you are sandwiched between them," Hamilton said. "Tomorrow will be a different experience and I hope I have the (car) set-up right for it."

The fight for pole devolved down to a private one between Vettel and Hamilton after Leclerc's threat collapsed dramatically in final qualifying.

After being nip and tuck with Vettel through practice and the first two qualifying sessions, Leclerc ended up a massive 0.680secs off the pace.

"I haven't been very strong in Q3," Leclerc said. "First, I did two mistakes which cost time but even with these mistakes I would not have beaten Lewis or Seb. I would have got close to Lewis but not Seb.

"But I think the main issue is me not really being good at the moment to set up the car for Q3 when I need to. In Q1 the car felt great, Q2 a bit less. Then in Q3 I lost it a bit more. On that I need to work to try to understand how much the track evolves and what I should do with the car to be right there for the Q3 lap.

"Of course it is disappointing. I need to learn quickly and understand that is going wrong with my approach from Q1 to Q3 because Q1 and Q2 was very positive but then in Q3 the car slipped a bit away from me. I will analyse it and hopefully come back stronger in the next race."

Leclerc is only in his second season in F1, but patience is thin at the top level of the sport and the demands and expectations on drivers high. He is right - he needs to sort out his qualifying if he is to start delivering on what appears to be considerable potential.

Q3 disappointment aside, though, Leclerc has been genuinely quick this weekend. So the likelihood is that he, too, will be in the fight at the front.

If Hamilton is going to make it seven wins in a row for Mercedes, then, he is going to have to work for it. As long as Ferrari can finally find it in them to bring their A game this year.