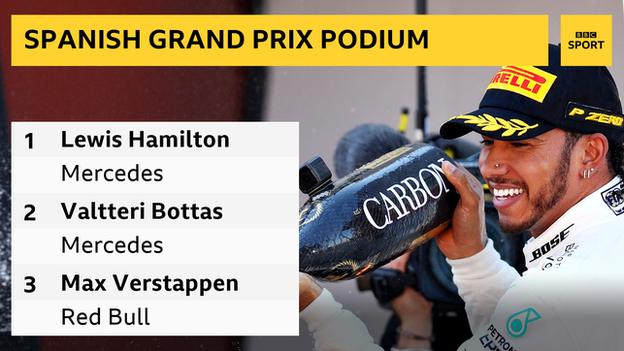 Lewis Hamilton led Valtteri Bottas to the fifth consecutive Mercedes one-two at the start of this season after dominating the Spanish Grand Prix.

The world champion, who started second, passed Bottas into the first corner and eased away to an ultimately comfortable win, despite a late safety car.

A long way behind, Ferrari used team tactics yet again but lost out to Red Bull's Max Verstappen for third.

But a disheartening performance for the Italian team on a weekend they hoped would make a step forward only emphasised the sense that Mercedes are in a league of their own this year and that the championship fight is already a private one between Hamilton and Bottas.

Hamilton, with three wins to the Finn's two and a point for fastest lap from Spain to add to his tally, leads Bottas by seven points and their closest rival, Verstappen, is a massive 46 points behind, with Vettel a further two adrift, and Leclerc 10 behind him.

Mercedes' lead is not far off two clear wins, at 25 points for a victory, and the size of the advantage at just about the quarter-way mark of a 21-race season underlines Mercedes' superiority.

Mercedes in a world of their own

An aerodynamic upgrade to the world champions' car for this race was said to be worth 0.4 seconds a lap and it more than compensated for both chassis and engine improvements by Ferrari.

Mercedes dominated the weekend, Bottas taking pole by 0.6secs after Hamilton had a messy qualifying session, and Hamilton controlling the race after making the better start, easing away in comfort.

The first corner was tense, with Hamilton, Bottas and Vettel three-wide on the entry, before Hamilton claimed the lead from the inside line and Vettel locked up on the outside and went into the run-off.

As the German rejoined, he ran team-mate Leclerc out of road, costing the Monegasque the third place he had just before claimed as Verstappen backed off to avoid running into the back of Bottas. Ferrari spent the rest of the race fighting a losing battle to reclaim that final podium place.

It set the stage for a tense fight at Ferrari. Vettel was struggling in the early stages with a flat-spotted tyre, damaged at the first corner, and Leclerc was pressuring him hard.

Ferrari eventually ordered their nominal team leader to let Leclerc by and then Vettel had to make an earlier than planned pit stop, forcing him on to a two-stop strategy.

Red Bull put Verstappen on the same, while Leclerc was on a one-stop, and the question was which would prevail.

Later on, Leclerc had to return the favour to Vettel, who was behind him on softer tyres mid-race, as Ferrari sought to maximise their drivers' strategies.

The race was panning out to a climax with Verstappen and Vettel on fresher tyres fighting to pass Leclerc protecting third on older tyres in the closing laps.

But in the end, the safety car decided it. Lance Stroll's Racing Point and Lando Norris' McLaren tangled at the first corner, spreading debris all over the road.

Hamilton and Bottas came in for fresh tyres and behind them Leclerc had to follow suit, while Verstappen and Vettel behind him stayed out, as they had just stopped a couple of laps before.

That dropped Leclerc down to fifth and they ran that way to the end of the race.

Plenty of action further down

The fight in the closing laps was all about the midfield, with some hectic and wheel-banging action deciding the final points positions.

The Haas drivers nearly tangled before Kevin Magnussen moved clear into seventh behind Pierre Gasly's Red Bull, while his team-mate Romain Grosjean dropped back first behind McLaren's Carlos Sainz and Toro Rosso's Daniil Kvyat before battling to hold off Kvyat's team-mate Alexander Albon in the closing laps for the final point.

Monaco. Usually not Mercedes territory, the track has favoured Red Bull and Ferrari in recent years. But Mercedes' pace in the slow corners at Barcelona suggests they will dominate again. Right now, it's hard to see anyone beating them.

Hamilton: "I have to put it down to this incredible team. This is history in the making to have five one-twos - I'm proud of that and proud of everyone's hard work."

Bottas: "As a team it's incredible, the fifth one-two in a run is really good. I got some points and that's important, every point will count, but I have to find out what happened at the start."

Verstappen: "It was a hectic first corner so I backed out of it and it gave me a good position for the first three corners, but the Mercedes is too quick. I'm happy to be on the podium." 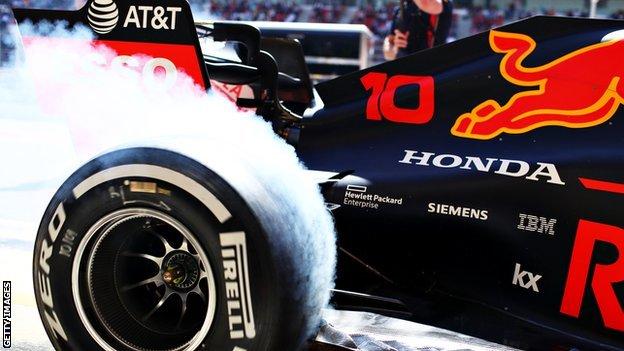