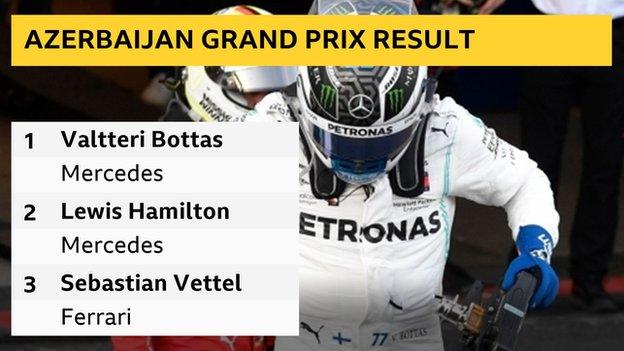 Mercedes set an all-time record of four consecutive one-twos at the start of a season as Valtteri Bottas beat Lewis Hamilton to win the Azerbaijan Grand Prix.

For the fourth race in a row, Ferrari were unable to challenge Mercedes - and again there were questions about the strategy chosen by the Italian team.

Sebastian Vettel finished third, never very far behind the Mercedes, but team-mate Charles Leclerc finished fifth when it looked for a while as if he might have been able to take fourth ahead of Red Bull's Max Verstappen.

Leclerc's consolation on a weekend that he had looked like dominating until crashing in qualifying was a point for fastest lap.

The result makes Mercedes the first team ever to start the season in such a dominant fashion and puts their drivers in an enviable position in the championship.

Bottas returns to the lead of the championship, leading Hamilton by the point he gained for fastest lap in Australia. Vettel is 35 points behind.

Hamilton closed in on Bottas in the final two laps looking for the win but made an error running wide at the last corner just as the Finn got the DRS overtaking aid by coming up to lap Williams' George Russell and the leader held on.

Bottas came close to losing the lead at the start, when Hamilton got alongside the Finn into Turn One after a better start from second on the grid.

But Hamilton gave Bottas plenty of room on the outside, and that allowed Bottas to hold him off on the runs to Turns Two and Three, after which he controlled the race.

Mercedes have the best car, but the margins appear to be quite small. But Ferrari are making it easier for them.

Leclerc might have won had he not crashed in qualifying, there are questions over the tyre strategy in wanting to start on the mediums, and also over how the team ran Leclerc's race.

What were Ferrari doing with Leclerc?

Leclerc's off-set strategy, starting on the medium tyres, provided the main interest in the race.

The 21-year-old started eighth after crashing in qualifying when he had appeared the favourite for the weekend, and once clear of the midfield runners he began carving huge chunks out of the gap to the front-runners.

By lap 11, he had caught Vettel, who Ferrari immediately called into the pits to change from the softs to the mediums, and Mercedes followed the German in with Bottas and Hamilton on consecutive laps.

That put Leclerc in the lead, needing to go long on the mediums and hope to fight back on fresh soft tyres in the closing stages.

Bottas, Hamilton and Vettel closed in and the Finn was on Leclerc's tail by lap 31, and passed him a lap later.

Leclerc pleaded to be pitted for fresh tyres immediately, but the team told him they wanted to wait because they were worried about the softs making it to the end.

But they waited only two laps - in which time Leclerc lost eight seconds to Bottas, at least a second of which was caused by letting team-mate Vettel by.

That left Leclerc well over 20 seconds behind Verstappen, and in a lonely fifth place.

After the race, Renault's Daniel Ricciardo was given a three-place penalty for the next race in Spain after reversing into Toro Rosso's Daniil Kvyat.

The pair had been battling for 10th place when Ricciardo lunged up in the inside at Turn Three. He misjudged it and ran straight on, meaning Kvyat could also could not turn into the corner. Attempting to rejoin, Ricciardo did not see Kvyat and simply reversed into his car.

Bottas: "It was actually a tough race even though not that much was happening at the front - Lewis was putting on pressure, but everything was under control. I'm happy to take the chequered flag and take first place."

Hamilton: "Congratulations to Valtteri, he drove a fantastic race, made no mistakes and deserved the win. It was all lost in qualifying. It's great for the team and this is the best start of the season we've ever had."

Vettel: "The first stint was really poor I struggled to get the tyres to work, then I damaged them, then when they did get hot I couldn't use use them properly they were damaged and I couldn't get a feel in confidence for the car - that's not so good around here.

"The last four races we were not quite there so we're not the favourites going into Barcelona, we have some upgrades coming and we need to chase them down."

Formula 1 races in Europe for the first time at the Spanish Grand Prix. It's the track where Ferrari looked so good in pre-season testing, leading to Mercedes believing they would start the season behind. How wrong they were - and how much Ferrari need to win there if this season is not to be a write off for them before long. 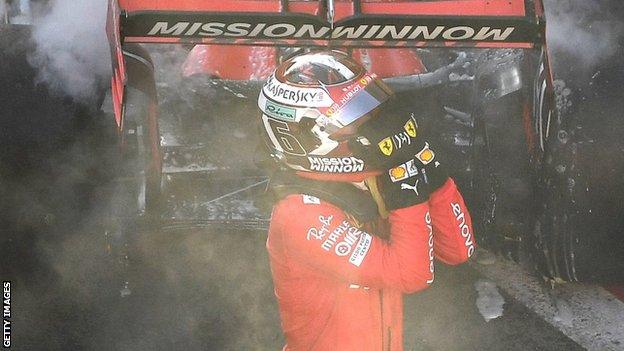