From the outside, a Formula 1 team's design department would appear to be a very rational environment, where logic rules, and careful decisions are made based on science and research.

You might believe there is no place in this world for dogma or blind faith. But you would be wrong.

I am a senior aerodynamicist at a current F1 team. I cannot reveal my identity, for reasons previously explained, but I want to help you understand some of the key issues around the biggest performance differentiators in F1 design.

In reality, some decisions we face as F1 car designers are just too complex to be taken back to first principles and investigated. Teams simply don't have the time or resources to assess them fully.

As a result, some aspects of car design are taken as articles of faith, and the rest built upon them. In these situations, we look to the demigods of aerodynamics for guidance, and uppermost in the current design pantheon is Adrian Newey.

Newey is the chief technical officer of Red Bull, and his multitude of world championship trophies won with Williams, McLaren and his current team have rightly given him the status of one of the greatest designers in F1 history.

Newey's area of expertise is aerodynamics and his standing has meant features he has pioneered on his cars have been adopted by other teams. Often - because of the limited time created by the high-pressure demands of the job - without full scrutiny and investigation.

The thinking is simple - Newey's car features a specific design characteristic; Newey's car is fast; therefore that design feature must be the right one for another team to adopt.

One example of this, and of Newey's continued influence in F1, is the high rake angle employed by most teams up and down the grid.

When we talk about rake angle, we mean the difference between the ride height at the front of the car and the back. A low rake angle means the floor of the car is sitting very flat, a high one and the back of the floor is raised a long way off the ground.

What's particularly interesting is that, in current F1, Mercedes employ one approach - low rake - while Red Bull, Ferrari, and to a large extent the rest of the grid, go for high.

In some ways, then, this year's title fight is a face-off between Newey's high-rake design theory and Mercedes' low-rake one. 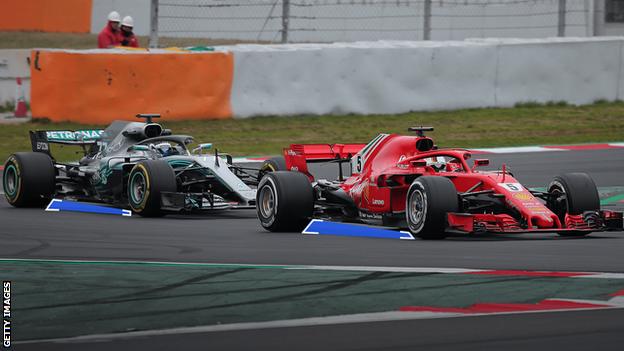 As you can see, some decisions can have so many knock-on effects that to truly assess which is the direction to go in you would need to design two whole cars.

Most F1 teams don't have anywhere near the resources to indulge themselves in that. And even those that do, such as Mercedes, Ferrari and Red Bull, have their hands tied by rules which restrict the amount of aerodynamic testing they are allowed to do.

All of which means judgement calls have to be made. On an aspect of design as fundamental as this, a team has to commit to an approach and design the rest of the car around it.

This is where the great technical directors and designers really come into their own. They are the ones who have consistently made the right calls on the big decisions and few, if any, can match Newey's record.

For many years, he has been the hot property in F1 and, as a result, has boosted the market value of those alongside him.

Teams, enthralled by Newey, have eagerly snapped up anyone who has worked closely with the great man. So his acolytes have found themselves in nearly every team on the grid.

In this way, the Newey philosophy has spread through F1, one aspect of which is using a high rake angle as a starting point for your design.

Newey has been pursuing high rake for 20 years or more. But it became a major trend from the early part of this decade, when his high-rake Red Bulls took four straight world title doubles with Sebastian Vettel.

Since then, more and more of the grid have been going high rake. This is now almost universal - with Mercedes the notable exception.

And that's what makes this so interesting, because Mercedes have won the last five constructors' and drivers' world championships.

Despite some preconceptions, their success has not been based solely on an excellent engine - generally the best from 2014 until this year - and a brilliant driver in Lewis Hamilton.

It is obvious from the GPS speed traces to which all teams have access that the Mercedes chassis is also of the highest quality.

Yet even with their extraordinary level of success, they continue to be the only team really trying a low-rake approach.

It is almost impossible to say for certain whether Mercedes' low-rake design leads to more or less ultimate performance. However, the fact no-one else is trying it, that the benefits of high rake are simply taken as gospel, shows the hold the cult of Newey has over F1.

What are teams trying to do with airflow?

The direction a team chooses can have a significant effect on the airflow around the car and an almost endless list of knock-on consequences.

Going back to aerodynamic first principles for a moment, the faster you can make the air go, the lower the pressure, and low pressure under the floor is downforce, sucking the car onto the road. The more downforce a car has, the faster it can go around a corner.

Now, at the speed F1 cars go, we aerodynamicists make the assumption that the air cannot be squashed or stretched. (In reality it can, but for our purposes we don't need to worry about this).

This means that if you want to increase the air speed you can do one of two things: increase the "mass flow" (the amount of air flowing past); or reduce the area you are forcing that air through.

Think of it like a hose pipe. If you want to make the water squirt out of the end faster, you can either open the tap - increasing the mass flow - or put your thumb over the end - forcing the water to rush faster through a reduced area.

Why is rake important?

Coming back to rake angle, the two approaches - high and low rake - are each favouring one of these things over the other to make the air flow as fast as possible under the floor as a whole.

However, most of the floor is a bit further away from the ground than it would be with low rake, as if you have taken your thumb off the end of the hose a little.

A low-rake approach is the opposite. The low height of the back of the car results in a smaller diffuser area and so less air is pulled under the floor. But what air there is, is squeezed through a smaller gap with the whole floor sitting very close to the ground.

This may sound relatively straightforward at this stage but there are so many side-effects of this decision that it could change the way you design the whole of the rest of the car.

The list is endless, and this is before we even consider the mechanical design of suspension and steering systems.

For those of you keen for more, read on as we discuss a few of the complexities of airflow with high and low rake.

In practice, one of the most critical things to consider is what is referred to as floor sealing. In my experience this is a bit of a catch-all term for talking about managing the airflow that comes off the sides of the floor, which we might be using to try to do a few different things.

One of these is trying to minimise the amount of air that is drawn under the floor from the sides.

Remember, we would like to accelerate the air under the floor as fast as we can, for as long as possible. To use another analogy, if you think of the airflow as a queue, and the diffuser as a gate through which people can pass at a set rate, you can see that the queue at the front of the floor will travel much faster if people don't keep pushing in from the sides.

Low rake can make this particular problem a little easier, as the smaller gap between the sides of the floor and the ground tends to impede air from going under the car.

On the other hand, high rake can be advantageous in another aspect of floor sealing - managing the rear-tyre wake.

Tyre wake, as we discussed in the last article, is the churning, turbulent air found behind the tyre, which we likened to the water behind a boat. Much like water, tyre wake will spread out behind the body that creates it. This is a problem because it has the effect of blocking the air exiting the diffuser, which we would like to be as large as possible to pull a lot of air under the floor.

In order to control the tyre wake, we try to direct vortices, which are spinning streams of air a bit like a mini tornado, towards the parts of the tyre where the wake is separating.

This encourages the air to stay attached to the tyre longer and results in a smaller wake, which can have a completely transformative effect on the performance of the diffuser.

Components in this area of the car are so sensitive because the small changes to the air around the tyre which they produce can have such big knock-on effects on the tyre wake, and, as a result, on the performance of the diffuser.

We saw this in Australia when what looked like relatively minor damage to the corner of Hamilton's floor had a devastating effect on his race.

At high rake, because the floor is raised up nearer to where the circular tyre face is vertical, a given movement of the wheel up or down won't make the gap between the tyre and floor open up very much.

However, on a low-rake car, the floor sits lower against the tyre face. As the car goes around the track and sees the same movement up or down, the gap between tyre and floor will change much more. This can make the job of tuning the aerodynamic devices harder.

Those are just two examples of a multitude of issues that arise from a team's choice of design concept.