"I don't know what just happened," Valtteri Bottas said after winning the season-opening Australian Grand Prix with as dominant a drive as Formula 1 has seen for some time.

Lewis Hamilton said he had "some ideas" about why he was 20 seconds behind his team-mate on a picture-perfect sunny afternoon in Melbourne's Albert Park. But rare is the day when the five-time world champion is beaten as comprehensively as this, especially by someone in the same car.

And down in fourth place, Sebastian Vettel, the man many thought came into the weekend as the favourite, was reduced to asking his Ferrari team over the radio: "Why are we so slow?" They said they had no idea.

Hamilton and Ferrari have some thinking to do before the next race in Bahrain on 31 March, but Bottas' victory has just introduced a new narrative into the 2019 F1 season. And it is perhaps not one that many expected.

Bottas was a man on a mission

For Bottas, this victory was nothing less than redemption after an exceptionally difficult 2018 in which he failed to win a race while Hamilton took 11 and a fifth world title.

The 29-year-old Finn left for the winter a chastened man, reflecting on what he described as the most difficult and disappointing year of his career. He went on holiday to Chile, and then back home to Finland, with a new beard and a new attitude. He was determined not to let the same thing happen again.

From the start of the weekend in Australia, Bottas was a man on a mission.

Hamilton topped all three practice sessions but the margin to Bottas was never large, and when it mattered in the top 10 qualifying shoot-out, Bottas came out of the blocks like a startled cat.

His first flying lap was more than 0.5secs quicker than Hamilton. Bottas failed to improve on his second run, allowing Hamilton to sneak pole position, but a marker had been laid down.

Come the start of the race, there was another one. A mediocre start from Hamilton, a flying one from Bottas, and the Finn had the lead into the first corner.

From that moment on, he never looked like being beaten - the pleasure it gave him was made clear by a post-race radio message, in which he offered a four-letter salute "to whom it may concern". The people he was addressing it to, he said, would know who they were.

"Every year you learn as a person, about yourself, what works for you and what doesn't," Bottas said. "Preparation includes how you rest, how you do your spare time, travel plans and all sorts, trying to optimise again everything for this year.

"It is quite difficult to explain what has been going on last winter inside my head but something changed about how I feel about things and life in general."

The difference from the start of last year could not be more extreme. In 2018, Bottas crashed heavily in qualifying and finished eighth in the race in what many viewed as a lacklustre performance.

He had some strong races after that, particularly early in the season as Hamilton took time to get up to speed, and should have had a couple of wins, but luck never went for him.

And by the time he was leading the Russian Grand Prix, he was out of title contention, and Mercedes boss Toto Wolff had no real choice but to order him to hand victory to Hamilton.

"Since I started to work with drivers 15 years go I tried to comprehend what is going on in their brains and I don't," Wolff said on Sunday.

"How he recovered from being written off, not up for the job in the second half of the season last year, scoring one of the most dominant victories in recent days, just shows us human potential and how much it is a mind game.

"It is for me also a bit of fairytale - don't let others break you, believe in yourself. And he has just showed us the whole weekend."

Vettel said: "He always had the speed. Last year did not go well for him for many reasons. He won the race, he was straight away far away from us, which is not good news for us. But he is a nice guy so I am really happy for him today."

Whether Bottas is really capable of mounting a consistent challenge to Hamilton over a full season remains to be seen, but he starts the season with an eight-point advantage, so he has at least put himself in the best position to prove it.

Why was Hamilton so far back?

Once Hamilton had lost the start, he was not going to beat Bottas anyway. But there were extenuating circumstances for Hamilton's deficit at the end of the race.

He was just over a second behind Bottas in the first laps, but he suffered floor damage on lap four - he said he did not know why, as he had not gone wide anywhere - and lost rear downforce.

Whether this was the reason or it was simply a poor balance, Hamilton was complaining about oversteer over the radio during his first stint. The team took some front wing out of the car in his stop, but still it was tending towards lacking rear grip in the second stint.

Most of all, his early pit stop to cover Vettel also put him on the back foot, as it meant a much longer second stint than planned.

"I naturally had a lot more pace in the car," he said. "I would have kept the gap at three seconds but then the damage happened and I started to fall back.

"With the super-early stop I knew from then the race was done. I knew I was going to be in trouble on the long run so I drove well off the pace to make sure at the end of the race I still had life left in the tyres."

What happened to Ferrari?

Most people in F1 left pre-season testing in Barcelona with the impression that Ferrari were a step ahead of the field, yet Vettel crossed the line in Melbourne 57 seconds behind Bottas.

Reaction on social media has been that Mercedes must have been hiding their pace in Spain, but this writer has seen evidence that the world champions genuinely believed they were behind, as Hamilton and Wolff said repeatedly over the weekend.

"For sure Ferrari didn't meet their expectations but it is tricky to find the sweet spot of these new cars. I think they took a wrong junction. I don't think there is a base performance problem."

At Red Bull, who were also further behind Mercedes in qualifying than they expected, they suspected that they and Ferrari had been caught out by the smooth surface of Barcelona, and not realised how narrow their aerodynamic operating window was. Get that wrong, and the tyres don't work as they should and suddenly big chunks of lap time can bleed away.

It works the same the other way around - get the set-up right, the car has the downforce you expect, the tyres are at the right temperature and the lap-time difference can be significant. 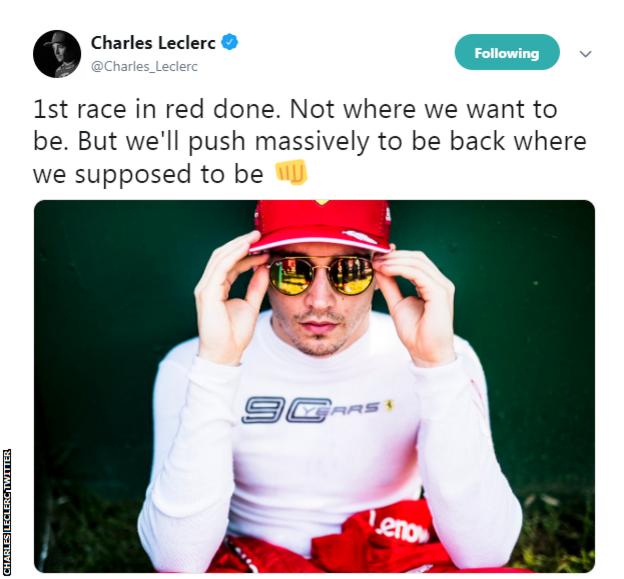 Ferrari team principal Matti Binotto said: "It is not what we were expecting. Winter testing was certainly different. Since Friday first practice, we never found the right balance on the car and we struggled with the tyres.

"We tried different set-up approaches but we never achieved the right balance and we were lacking grip. Did we understand that yet? Probably not. We need to go back and analyse the data and see what happened.

"But as Toto said, we didn't find the right window, or balance on the car. But one thing we are certain of is that this weekend is not the real potential of our car. We are pretty sure the potential is certainly bigger and we have not been able to exploit it all through the weekend.

"I think it will be a good lesson learned. If we can identify the issue, we can be back even more stronger."

Vettel said: "In Barcelona, we were happy with the car from day one. The balance was right, the car was responding to what I was asking it to do and I had a lot of confidence.

"All weekend, I didn't get that confidence and I did not have the car underneath to play around. It wasn't doing what I was asking. There were glimpses here and there that were really strong. The performance in some corners was really good. But in the majority of corners it wasn't.

"Clearly we are missing something. Right now we don't have an answer. But I am sure we will find something because we know the car is better than what we have seen.

"We have all the ingredients it needs. we have a good car, we know it. this weekend we didn't and overall we were not competitive enough but we will be back."

Once Vettel had made his earlier stop, he backed off to manage his tyres. He lost a position to Max Verstappen's Red Bull, and finished the race with team-mate Charles Leclerc behind him - before Ferrari told the Monegasque to back off and bring it home, not wanting to risk the cars in this first race of the season.

Leclerc went for the point for fastest lap on the last lap, but Bottas had already gone for it the lap before, and the Ferrari missed it by more than 1.3secs.

As for Verstappen, the power produced by the new Honda engine in the car impressed everyone at the weekend.

"It is great to see the improvement it has had for the team," Hamilton said. "They were with Renault for a long time and they were able to pass the Ferrari and it's awesome.

"The Red Bulls are with us and we are going to have a really great battle through the year, I think, between the three of us.

"Ferrari, something has not been right the whole weekend but I am pretty sure the car is still good and I think it is going to be a really interesting season."

There is every reason to believe Ferrari are right, and that they under-performed in Melbourne.

But for the sake of their season - and the entertainment value of the sport this year - Hamilton, Wolff, Binotto and Vettel had better be right. For if Mercedes have this sort of advantage everywhere, the season would be pretty much over already.

For Ferrari, and F1 as a whole, a lot could hang on Bahrain in two weeks' time.