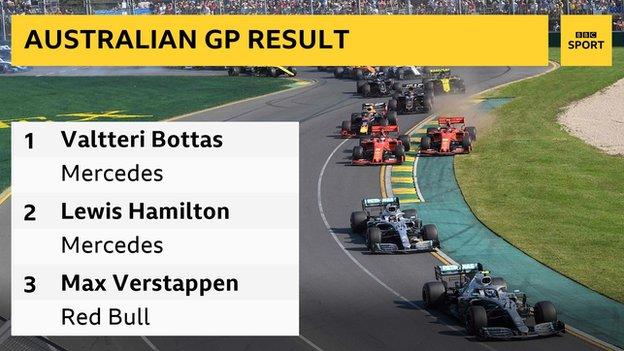 The Finn took the lead at the start from Hamilton, who made a slow getaway from pole position, and even took the new bonus point for the fastest lap.

Hamilton was left far behind, and had to concentrate on holding off Red Bull's Max Verstappen for second place.

Verstappen passed Sebastian Vettel for third on a sobering day for Ferrari.

"Why are we so slow?" Vettel asked his team at two-thirds distance. "We don't know at the moment," came the reply. It was an exchange that summed up Ferrari's entire weekend.

It was a weekend which began in mourning following news of the death of F1 director Charlie Whiting - one of the most influential people in the sport.

Whiting, who was 66, was due to officiate this weekend's race. He was the official race starter and oversaw all rules matters in F1.

Bottas dedicated the win to Whiting: "Thank you Charlie. This win is for Charlie and all his work in F1. He has done massive amounts, so thanks from all us drivers."

Mercedes came to Melbourne thinking they were at best level with Ferrari on pace - and could be as much as half a second a lap behind.

But they dominated the weekend from the off, while Ferrari struggled, and were lost for answers as to why.

Bottas made a clean sweep of the race and was comfortably able to grab the extra point that has been introduced this year for the driver who sets the fastest lap, underlining his performance by fending off Hamilton's own attempt to snatch the point.

The Finn, who had a difficult year in 2018 failing to win a race as Hamilton took 11 victories and the title, was determined to bounce back this year and signalled his intent to take the fight to Hamilton and be a title contender this season with a masterful performance.

He had pulled a 3.8-second lead on Hamilton by the time Mercedes stopped the world champion on lap 15 in response to Vettel's early pit stop a lap before.

Bottas carried on for another 10 laps before his stop, and by the time he rejoined he was more than 12 seconds ahead of Hamilton.

The five-time champion was already complaining about his tyres, saying he was concerned they might not last the race. They did, but he was out of the fight for the lead.

Hamilton had Vettel within two seconds of him after Bottas' stop, but the German was soon under pressure from Verstappen, who like Bottas had delayed his first stop.

Verstappen passed Vettel on the outside into Turn Three, six laps after his stop, and set after Hamilton but was unable to challenge. An off-track moment with nine laps to go ended Verstappen's challenge.

The Monegasque had made a couple of small errors early in his Ferrari debut, but thanks to a late stop he was on fresher tyres than Vettel for the second half of the race and he closed a 12-second lead in about 20 laps and was on Vettel's tail in the closing laps.

Vettel had said before the weekend that they were free to race but Leclerc appeared to back off once he had closed on his team-mate.

What about the British rookies?

Kevin Magnussen's Haas was best of the rest in sixth, ahead of Renault's Nico Hulkenberg.

McLaren's Lando Norris had started a superb eighth for McLaren but he finished out of the points after a frustrating race.

He lost a couple of places on the first lap and then got stuck in a train of cars after his pit stop and finished 13th.

Alexander Albon, who races under a Thai licence but was born in London, was 14th in his Toro Rosso.

George Russell drove a lonely race in the slow Williams to take 16th place, two laps behind, although he comprehensively out-paced team-mate Robert Kubica, who damaged his front wing on the first lap.

Hamilton: "It is a good weekend for the team. A really fantastic job from everyone. Valtteri drove an incredible race and he really enjoyed it. Lost position at the start, that was a little disappointing, but I will just train and work hard for the next one."

Verstappen: "Happy to pull that move off and then challenge Lewis for second. Pretty pleased with that. To start the season on the podium challenging the Mercedes car ahead is a great start for us." 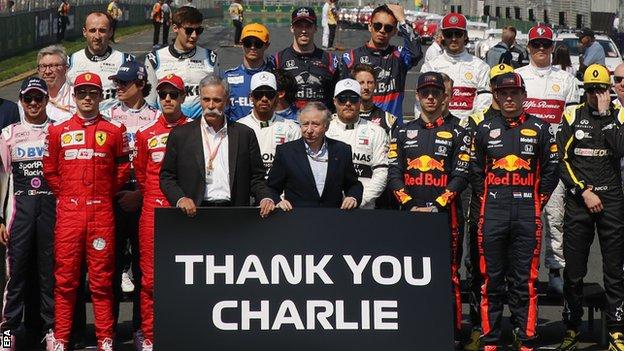