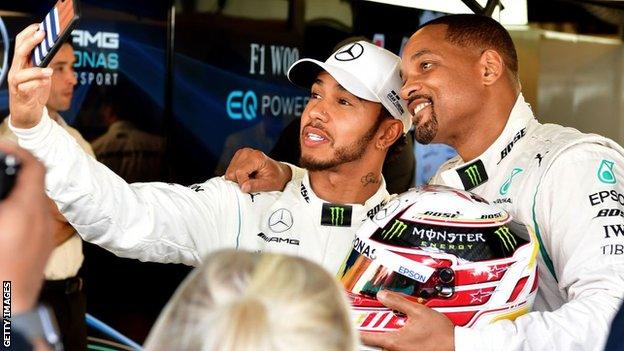 Jenson Button will join Sky Sport's F1 coverage as a pundit for all 21 races of the 2019 season. (Motorsport)

Niki Lauda thanks Formula 1 fans for their support during his recovery, saying it helped him to recover quicker after his lung transplant. (Instagram)

Lance Stroll to drive in Force India's end of season test. It's been assumed since his father Lawrence Stroll bought the team earlier this year his son would drive for them in 2019, but it has not been announced yet. (Formula 1)

Fernando Alonso calls his F1 finale a "magic weekend" and thanks Lewis Hamilton and Sebastian Vettel for the improvised donut celebrations. (Crash.Net)

It was Daniel Ricciardo's final race for Red Bull before he moves to Renault for 2019. Max Verstappen tributes to him on Twitter. 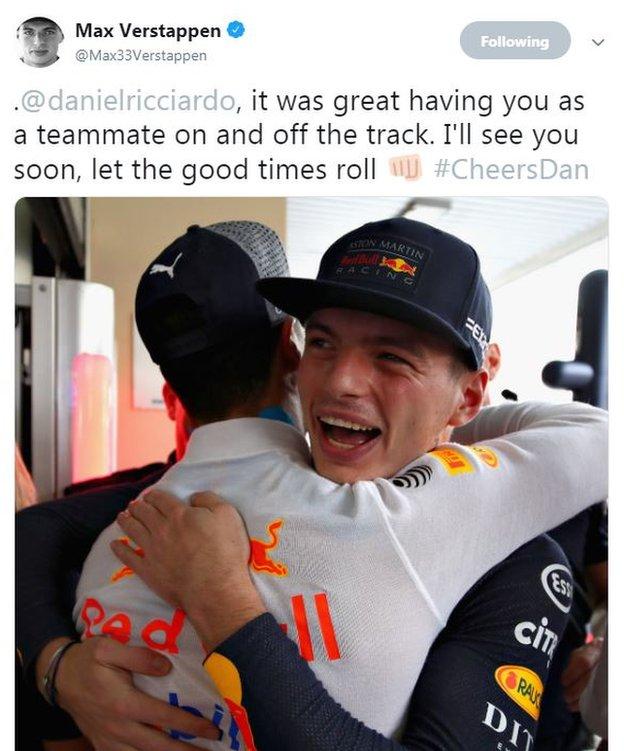 Fernando Alonso has admitted he is open to the idea of returning to Formula 1 in the near future if he is able to find the motivation. But he currently has no plans for 2020 with plenty of options available to him. (Express)

Max Verstappen explains why his Abu Dhabi qualifying lap was a "disaster". Believing he could have gone faster if it weren't for the team overheating his tyres before the run. (MotorsportWeek)

Sebastian Vettel tells Ferrari Mercedes domination for five consecutive years is how the team must respond in 2019 to fight back. (Crash.net)

McLaren's Stoffel Vandoorne says he felt "quite relieved" following his final Formula 1 qualifying session in Abu Dhabi after what has been a disappointing season for the Belgian driver. He's been out qualified in every race by team-mate Fernando Alonso this season. (Autosport)

Nico Rosberg has claimed Sebastian Vettel failed to deal with the pressure from Lewis Hamilton in the title battle this season, and that he must win in Abu Dhabi to stop the rot. (Daily Mail) 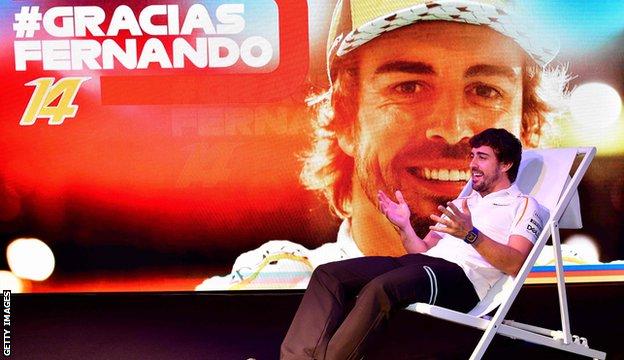 McLaren driver Fernando Alonso admits he may feel "desperate" to return to Formula 1 once he has left the sport at the end of 2018. (Motorsport)

Sergey Sirotkin's Russian backers say they did not want to keep the 2019 race seat Williams handed to Robert Kubica because they were "unpleasantly surprised" with the team's performance this season. (ESPN)

Kubica has been welcomed back to Formula 1 by rivals Lewis Hamilton and Fernando Alonso, who rate him as one of the best drivers they have competed against. (Racefans.net)

Mercedes driver Valtteri Bottas says 2018 has been his "worst season" in Formula 1. (Racefans.net)

McLaren have revealed a one-off livery for Fernando Alonso's final race before he retires after this weekend's Abu Dhabi GP. (F1.com)

Alonso says there are "iconic races that probably I will add to my calendar" after he leaves F1. (Autosport)

McLaren chief Zak Brown has not ruled out a Alonso making a return to the team, saying the team would not hesitate "to have Fernando be the first on the speed-dial list" if they need a driver.(Reuters)

World champion Lewis Hamilton says he has much greater mental strength than when he won his first championship 10 years ago and can now handle anything.(Racefans.net)

Red Bull's Daniel Ricciardo believes his exploits during the 2014 season "changed the level of overtaking from other guys in the sport".(F1i.com)

Robert Kubica has agreed a deal to race for Williams in 2019. The 33-year-old Pole has not raced in F1 since 2010 after suffering life-changing injuries in a rally crash. (Autosport)

Red Bull driver Max Verstappen "cares about nothing and nobody" and is nothing like European Formula 3 champion Mick Schumacher, says the German's friend Nicklas Nielsen. (BT, via Express)

Mercedes team boss Toto Wolff says Verstappen will be world champion when he irons out his "raw edges". (ESPN)

Verstappen complained several times on his radio about the amount of time he was losing with lapped cars before his collision with Esteban Ocon. (RaceFans)

Wolff says Mercedes can afford to "go for broke" in the final round of the world championship in Abu Dhabi. (F1i.com)

Louis Deletraz says Haas "see his potential" after handing him his first test in a current F1 car at the 2018 Pirelli tyre test.(Motorsport)

Monegasque driver Charles Leclerc claims Sauber's impressive progress in the final part of the Formula 1 season is due to set-up work, not upgrades, because it stopped developing its 2018 car early. (Autosport.com)

Spanish driver Fernando Alonso is refusing to rule out returning to the Formula 1 grid in 2020 after a year of recharging his batteries. (PlanetF1.com)

Britain Dan Ticktum's dominant victory in the Formula 3's Macau Grand Prix has put him on the verge of the superlicence he needs to race in F1, the FIA has confirmed. (Motorsport.com)

Renault and Nissan chairman Carlos Ghosn, a key supporter of the French manufacturer's F1 programme, has been arrested in Japan, facing allegations of financial impropriety. (Motorsport.com)

FIA race director Charlie Whiting admits the near-miss between Lewis Hamilton and Sergey Sirotkin in Brazil was "scary" but says it didn't need to be investigated. (Racefans.net)

F1 drivers have backed a potential revival of the Dutch Grand Prix, but expressed concerns that overtaking would be difficult at the Zandvoort circuit. (Racefans.net)

F1's chief executive Chase Carey says a number of existing races with "unattractive agreements" could be replaced, paving the way for a 25-race calendar. (PlanetF1.com)