George Russell will become the third British driver in Formula 1 next year after signing to race for Williams.

The 20-year-old, a Mercedes protege and leader of this year's Formula Two championship, has secured what Williams describe as a "multi-year contract".

"I feel on top of the world," Russell told BBC Sport. "It has been a lifelong dream to make it to F1 ever since I started racing when I was seven.

"It was a long road. Suddenly it's here and it just feels amazing."

Russell said he would remain a Mercedes young driver but added: "As of 2019, I am fully contracted to Williams and that is my 100% full focus."

Russell joins Mercedes' Lewis Hamilton and fellow rookie Lando Norris at McLaren to make the largest British contingent on the grid since 2016.

"He is already highly regarded in the paddock and a driver whose career we have been watching for a while.

"In the time we have spent with him so far, we believe that he will be a great fit for our team. His commitment, passion and dedication are exactly what we need." 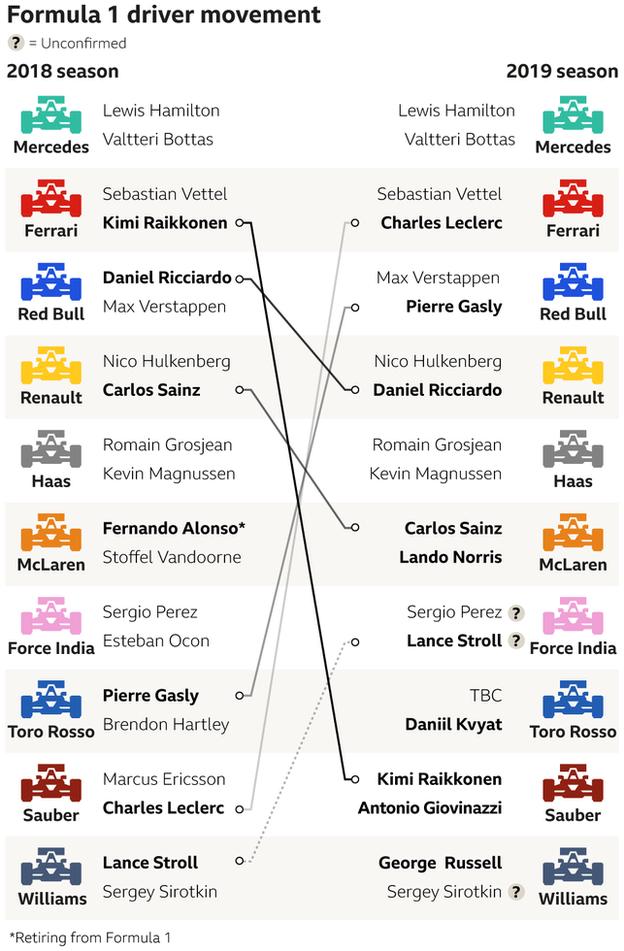 Russell said he felt "extremely well prepared" for F1 after two years in the Mercedes young driver programme, including a series of test outings and two appearances in practice sessions for Force India last year.

In an exclusive interview with BBC Sport, he said: "I have been very fortunate with the guidance and opportunity Mercedes have given me over the past two years.

"I have never been thrown in at the deep end. I started off with a private test in a 2015 car at the start of last year before getting the opportunity to test the 2017 car in Budapest and then into the P1 sessions with Force India.

"It has been a perfect progression and slope into a full-time race seat and I really feel that now I am ready for this."

In his role as reserve driver for Mercedes, Russell said he had learned valuable lessons from four-time world champion Lewis Hamilton and his team.

"It has been an incredible opportunity for me to see how he approaches and deals with a race weekend from within," Russell said.

"He is portrayed as a guy who from the outside maybe doesn't look as interested in F1 as he does other aspects of life, but he is extremely motivated and really works hard to get the best out of all of his people.

"Just seeing how he approaches situations and the relationships was a great insight for me.

"My goal is to become F1 world champion one day and to do that I have to be the best, and learning from someone like the Mercedes team and from Lewis is a great opportunity and showed me that you cannot just rely on talent alone."

Williams are one of the most successful teams in F1 history but they are in the midst of their worst-ever season and are poised to finish last in the constructors' championship.

Russell said he believed the team were making "a number of changes in the factory" to return to higher levels of performance, after a "tough" season.

"F1 is not just about the driver or the car. You all have to work together to get the best out of each other, and that is something I am really going to be working on - on building these relationships within the team, having trust from all aspects that we are all on the same page and all going in the same direction."

Russell said he believed Williams could target returning to a position as 'best of the rest' behind leading teams Mercedes, Ferrari and Red Bull - saying "fighting for podiums" was a "realistic target".

Who will drive the other car?

Williams have not yet signed a driver for the second car alongside Russell.

Canadian Lance Stroll is leaving the team at the end of the year to join Force India. This has not yet been officially confirmed but is an open secret within F1. The 19-year-old's father Lawrence Stroll led a consortium of businessmen that rescued Force India when it went into administration in the summer and wants his son to drive for his own team.

Stroll's team-mate, the Russian Sergey Sirotkin, could retain his drive, while another possibility is that Williams promote reserve driver Robert Kubica to a race seat.

A year ago, Williams intended to give the Pole a race seat in 2018, more than seven years after his career was curtailed by life-changing injuries sustained in a horrific rally crash in February 2011.

In the end, Sirotkin was preferred, after impressing in a test at Abu Dhabi after the end of last season.

But Sirotkin's performances have not made a compelling case for him to be retained and the team are considering whether there might be better options.