Ferrari's Sebastian Vettel was a surprise pace-setter ahead of Lewis Hamilton's Mercedes in second practice at the British Grand Prix.

The German was 0.187 seconds clear of Hamilton, whose Mercedes team appeared to be unexpectedly struggling for pace on the sweeping Silverstone track.

Mercedes' Valtteri Bottas was third, ahead of Ferrari's Kimi Raikkonen.

If Hamilton wins on Sunday it would be a record sixth British GP victory, and would take him ahead of Sebastian Vettel in the drivers' championship, in which the German currently leads by one point.

Verstappen lost control at the Luffield hairpin, running a little wide, the car snapping one way, before the Dutchman over-corrected and spun into the wall, damaging the right rear corner of the car.

Verstappen was running a Friday gearbox so will not have a grid penalty, even if the impact damaged the driveshaft.

It was the latest in a series of errors for Verstappen this season, which affected him at every one of the first six races of the season.

They had appeared to end with a run of three strong results in Canada, France and Austria - a third, second and then a win - but this was an unwelcome return to his previous form, which Red Bull will hope was an aberration. 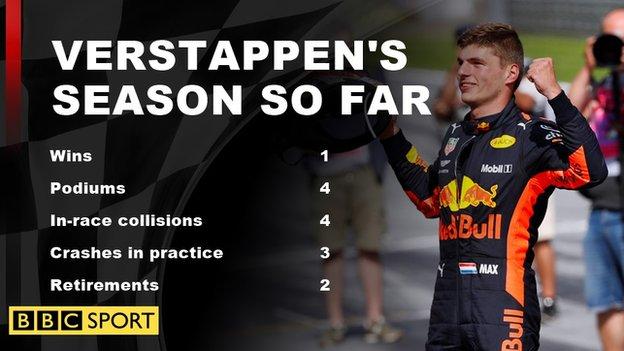 Vettel's pace was a surprise not just because Mercedes were expected to dominate at a track that in theory suits their car, with its long, fast corners, but also because Ferrari generally look less competitive on Fridays than they end up being when it matters on Saturdays and Sundays.

However, Hamilton had a significant advantage on the race-simulation long runs later in the session, when teams and drivers run with heavy fuel loads and used tyres to check their race pace.

The world champion was more than 0.5secs quicker than Raikkonen when both ran the soft tyre. Vettel did not do a race simulation on the soft tyre, preferring to concentrate on the medium, on which he was slightly slower than Hamilton's pace on the soft.

There was another surprise in seventh place, where Fernando Alonso was unexpectedly competitive in the McLaren after a number of unsuccessful races.

McLaren racing director Eric Boullier has left the team this week as part of a restructure of racing management, which has seen Andrea Stella promoted to performance director to head race team operations and former Indycar driver Gil De Ferran made sporting director to oversee the performance of the team and drivers.

Alonso was just 0.048secs ahead of Renault's Nico Hulkenberg, a more familiar leader of the group of best of the rest. The German was followed by the Force Indias of Esteban Ocon and Sergio Perez and the Sauber of Charles Leclerc, who is to be promoted to Ferrari next season.

Haas driver Kevin Magnussen was only 12th, behind Renault's Carlos Sainz. The Dane's team-mate Romain Grosjean did not take part in the session after crashing heavily in the morning's first practice session and damaging his chassis.