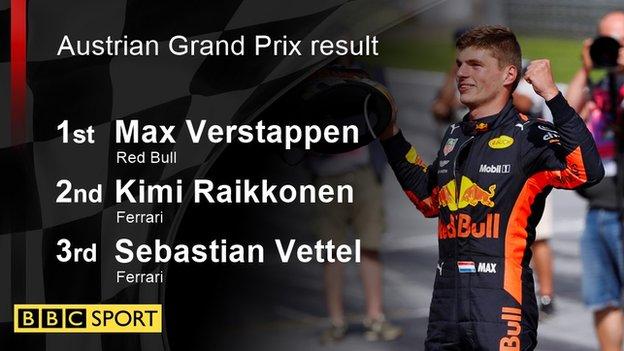 Hamilton retired due to a loss of fuel pressure with eight laps to go as he was looking to regain his title lead following a Mercedes strategy blunder and tyre problems.

His retirement, with title rival Sebastian Vettel finishing third in his Ferrari behind team-mate Kimi Raikkonen, puts Vettel into a one-point lead heading into next weekend's British Grand Prix.

Mercedes will leave Austria and head to Silverstone with plenty on their minds as they ponder how what had looked set to be an easy one-two on a weekend they had dominated fell apart.

Their problems handed a first win on their home track to Red Bull, for whom Verstappen drove beautifully to control the race once Mercedes hit their problems, well out of reach of the pursuing Ferraris.

What had appeared set to be a comfortable cruise to a one-two for Hamilton and Valtteri Bottas began to fall apart for Mercedes relatively early on.

Bottas started from pole but Ferrari's Kimi Raikkonen muscled between the Finn and Hamilton off the line and took second place, with Hamilton into the lead and Bottas briefly falling back behind Verstappen into fourth after the first corner.

Bottas reclaimed second place with a brave move around the outside of Verstappen and Raikkonen into Turn Four and Mercedes looked to be in control.

But Bottas retired on lap 14 of 71 with a loss of hydraulic pressure, and Mercedes' strategists failed to react to the imposition of the virtual safety car, which remotely forces all cars to reduce speed, as his car was recovered.

Stopping under the VSC costs less time than during active racing and all the leading teams apart from Mercedes took advantage. The world champions soon realised they had made a grave error.

Verstappen rejoined just 13 seconds behind Hamilton, with Raikkonen and Red Bull's Daniel Ricciardo also close enough to mean the Briton would come out behind them when he stopped.

Mercedes' chief strategist James Vowles came on to the radio to apologise to Hamilton, saying it was his error - a message he had to repeat later in the race after his driver complained about the team "throwing away a win".

It was the third time this season that Mercedes' strategists had made an error around a safety car - after Hamilton lost a win in Australia in March, they failed to stop him under a safety car in China.

But as it happened, Mercedes cascading series of problems made the strategy error moot.

Hamilton stopped on lap 25 for tyres and rejoined in fourth, ahead of Vettel. But the world champion was soon struggling with rear tyre wear and his rival closed in, and overlook on lap 39.

A dark stripe was appearing on Hamilton's left rear tyre - a sign of blistering, where the rubber overheats, bubbles and tears badly - and it became clear Hamilton would have to stop again and fourth was the best he could hope for. Ricciardo had already run into his own blistering problems and dropped back, and would retire later with a broken exhaust.

But then on lap 63, Hamilton complained of a loss of power and pulled off the track with a loss of fuel pressure, his first failure to finish in the points since the 2016 Malaysian Grand Prix, when an engine failure inflicted major damage on his title hopes.

Heading into the race, few would have predicted a Red Bull victory, after the team's least competitive showing in qualifying of the year so far. Nor would anyone have predicted such a thrilling, eventful race when Mercedes looked set to dominate.

But hotter temperatures in the race than in qualifying brought them back into the competitive picture, and Verstappen put himself into a position to benefit from Mercedes' misfortunes with an aggressive first lap.

As Raikkonen ran wide out of Turn Three after challenging the Mercedes, Verstappen pounced. Bottas passed the Ferrari and Red Bull on the outside on the run to Turn Four, and then the Dutchman took third place from the Ferrari with a brave move into the fast Turn Seven.

Verstappen stayed within range of the Mercedes in the opening stint and was in a position to pounce when Bottas hit problems and Mercedes messed up Hamilton's strategy.

The 20-year-old had a difficult start to the season, with significant errors in all the first six races, but since the Canadian Grand Prix he has driven beautifully with the control and precision that marked this race.

Verstappen was six seconds clear of the Ferraris with 20 laps to go, but he began to run into the same blistering problems that had afflicted Ricciardo and Hamilton and he had to measure his pace to the end. He crossed the line just 1.5secs ahead of Raikkonen, with Vettel a similar distance behind.

The good side to Grosjean

Behind the top three, Romain Grosjean took his first points of an incident-prone season on a strong weekend for Haas, for whom his team-mate Kevin Magnussen finished fifth, just 1.575secs behind.

The Force Indias of Esteban Ocon and Sergio Perez were next, ahead of an unlikely eighth place for Fernando Alonso's McLaren after starting from the pit lane.

The Spaniard had a difficult race running at the back for a while, but benefited from the unusually high number of retirements and not being affected by the tyre blistering on some other cars, and passed Sauber's Charles Leclerc in the closing stages.

Leclerc, expected to replace Raikkonen at Ferrari next season, was ninth, ahead of team-mate Marcus Ericsson, the two passing Toro Rosso's Pierre Gasly together at Turn Four in the closing laps.

The British Grand Prix next weekend is the third race of F1's first 'triple header'. Mercedes will be expected to dominate there, as the track's high-speed nature and sweeping corners is likely to perfectly suit their car's qualities. But Austria showed that nothing can be taken for granted.

Verstappen said: "It was really hard to manage the tyres. We had to manage them and hang on. I need to catch up with the points. It was a good day for me and I just hope we can continue like this."

Vettel said: "We were chasing him down at the end but couldn't quite make it. The pace was good, the tyre management was good. Positive day."