Valtteri Bottas led Lewis Hamilton in a Mercedes one-two at an incident-packed first practice session for the Spanish Grand Prix on Friday.

The Finn was 0.849 seconds quicker than Hamilton, although Bottas was using a softer tyre than the world champion when they set their fastest times.

Ferrari's Sebastian Vettel and Kimi Raikkonen were third and fourth, with the German 0.950secs off the pace.

The Australian ran wide after an oversteer moment at Turn Four and touched the barrier, damaging his front wing and left-hand front suspension.

He was third quickest at the time but dropped down to seventh at the end of the session, behind team-mate Max Verstappen and the McLaren of Fernando Alonso.

Robert Kubica made his first appearance at a grand prix weekend since the end of the 2010 season, replacing Russian Sergey Sirotkin as reserve and development driver at Williams.

Kubica, who has only partial movement in his right arm after the rally accident that curtailed his career in February 2011, was 19th quickest as Williams struggled on a track that exposes the car's aerodynamic weaknesses, but the Pole was 1.246secs quicker than team-mate Lance Stroll.

The Canadian had just set his quickest time when he went off at Turn Four and ended his session. Kubica set his fastest lap on his next tour after the yellow flag for Stroll's incident was rescinded, on the same type of super-soft tyre. The team did not reveal whether the cars were in the same specification.

Alonso's performance at his home race was encouraging for McLaren, who have introduced a major upgrade to their car, featuring an elaborate new nose design, and hope to make progress towards the front of the field.

Alonso ended the session 0.6secs slower than Verstappen. It had been McLaren's ambition to match Red Bull this year, before McLaren's difficult start to the season led to internal ructions and the removal of Tim Goss from his role as chief technical officer chassis before the last race in Azerbaijan.

Bottas dominated the session for Mercedes. The Finn, who has been in a rich vein of form in the past three races and would be leading the championship had he not suffered a puncture while leading in Baku two weeks ago, was 0.302secs quicker than Hamilton as the two both race the soft tyre early in the session.

Bottas then continued with the soft while Hamilton switched to the slower but more durable medium to assess its capabilities in the race, allowing Bottas to stretch his advantage.

Ferrari looked surprisingly off the pace, but that has often been the case in Friday practice this season only for them to improve on Saturday when it matters.

Almost all drivers had moments. Haas driver Romain Grosjean had an off at Turn Four and a spin. Bottas, Vettel, Kubica and Sauber's Marcus Ericsson all had spins, and many others ran wide or had wobbles as the strong wind played havoc with the cars' aerodynamics on this exposed track. 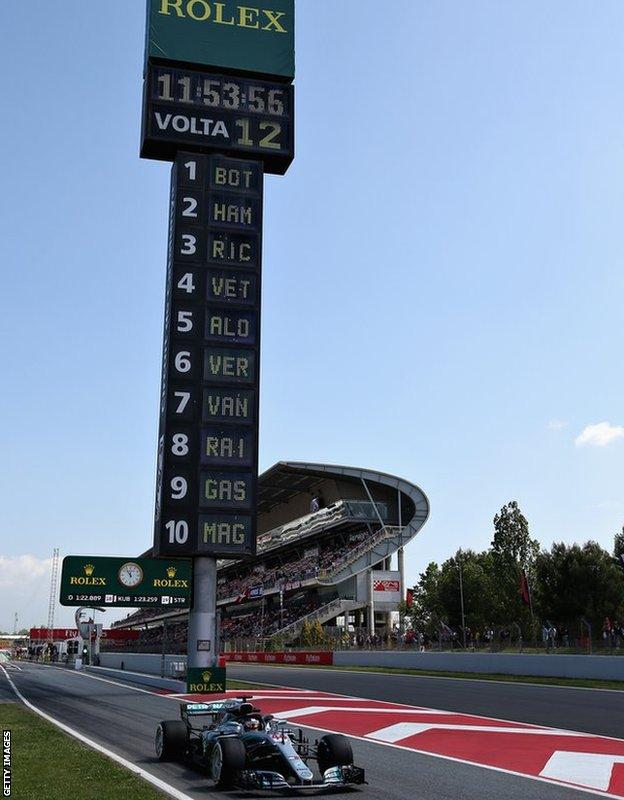