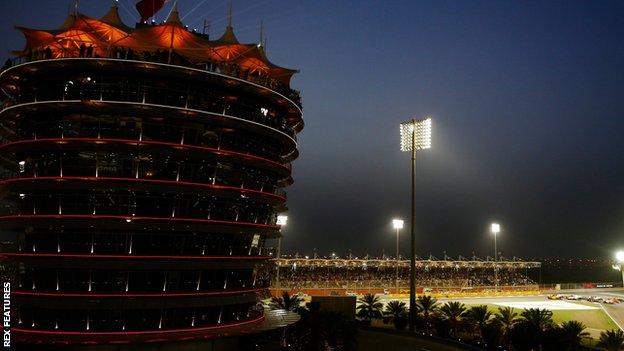 The battle to become the first driver of the modern generation to win a fifth world title just got really interesting.

Mercedes' Lewis Hamilton started the season as the hot favourite to beat his rival Sebastian Vettel to the achievement, but the Ferrari driver now has a 17-point lead after victories in the first two races of the season.

Vettel's win in Bahrain on Sunday demonstrated both the size of the task facing Hamilton and the incredibly high level of competition at the front of the field between these two all-time greats.

Hamilton was pleased to rescue a podium finish in third place from a race he started ninth, survived a collision with Red Bull's Max Verstappen and pulled off a spectacular overtaking move that saw him pass three cars in almost one manoeuvre.

But the 49th victory of Vettel's career was right up there with the very best he has ever achieved, a masterclass in control and calm under intense pressure brought about by a cunning attempt by Mercedes' strategists to overcome what, at least before the race, appeared to be a faster car.

How did Vettel do it?

Vettel looked in complete control of the race until Mercedes put his pursuer Valtteri Bottas on the same one-stop strategy as Hamilton. It was a devilishly clever move and it left Ferrari with an agonising decision. Stick to their plan of a two-stop or try to make the tyres last?

Pit again, and Vettel would have to pass both Mercedes out on track. Stay out and he would be asking 'soft'-compound tyres to do 39 laps - 30% longer than the recommended maximum life.

Vettel said: "By them going on to the medium, I thought: 'That's checkmate.' Because [at that point] we had to come in again. It was a great strategy and put us under a lot of pressure."

Ferrari said they were always open to the idea of keeping Vettel out, but the unlikelihood of it working can be judged by the fact that it was their 'plan D' - their fourth-best pre-race strategy.

Vettel made his first and only stop on lap 18 and fitted soft tyres that were expected to last only 30 laps. There were 39 to go.

On softer tyres, he should have been much faster than Bottas behind him on mediums, but the pace differential was not that big and by lap 30 there was nothing to choose between them on lap time.

Ferrari kept their options open as long as they could, but the final turning point was team-mate Kimi Raikkonen's second stop from third place on lap 35, when something went badly wrong.

The left rear was stuck. Raikkonen was given the 'go' signal before the wheel had even been taken off. He bowled over a mechanic, who suffered a nasty leg fracture, and was forced to stop in the pit lane.

That meant the pit lane was out of use for Ferrari for a key period of time, by which point the opportunity to pit Vettel and give him sufficient time to have a realistic chance of chasing down both Mercedes was effectively gone. He had to make staying out work.

"When they told me the plan," he said, "I first had to think: 'What was that again?' It wasn't the first or second option. When did they tell me? I don't know, probably something like 20-something laps to go.

"I knew it was our only chance to win the race. Otherwise we come in change tyres and finish third. With them on the medium and having such strong pace for so long we knew it would be difficult on a fresh set. We would probably chase them down, but to pass is a different story. First we had to get past Lewis and then chase Valtteri and get past.

"Fifteen laps to go I was very comfortable; 10 laps to go, the tyres just dropped.

"I came on the radio and said I had everything under control. That was a lie. I was hoping they would tell Valtteri that Sebastian is taking it easy and tell him to save the engine and turn it down and give up. Equally I was sure if I said the truth and that I was struggling massively with the tyres they would tell him.

"It was really tough the tyres took another step down 10-12 laps to go. It was really difficult to keep the car on the line, especially in Turn Eight and 10, getting out of these low-speed corners.

"When I saw him in DRS range I was thinking it would be difficult to make it last. But really happy we just managed to stay in front." 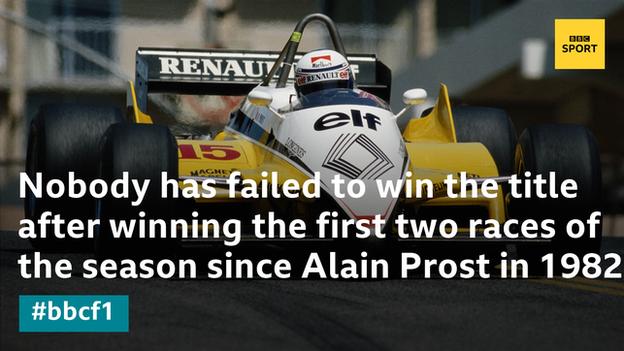 The skill Vettel displayed in managing those fragile tyres to the end, judging his pace to go just fast enough to keep Bottas at bay without taking too much out of the tyres, was a show of consummate race management.

As was his decision with two laps to go to save hybrid energy, knowing that Bottas would catch him around the start of the last lap, and wanting to make sure he had as much power as possible on the pit straight to fend him off.

There was a debate afterwards about Bottas' aggression - or lack thereof - and whether the Finn mishandled his only chance. Many felt Vettel himself, Hamilton, either Red Bull driver or Fernando Alonso would have done better - either properly gone for it in Turn One, or driven that corner to get a run into Turn Four. Bottas did neither one nor the other and paid the price.

But that should take nothing away from Vettel's drive. In Australia, he admitted, he had got a bit lucky. This race, though, was about as well deserved as they come.

How did it rank among his best, I asked him. "Fortunately, I have a lot to choose from," he smiled. "But certainly it felt great."

Hamilton and his Mercedes team were left to count the cost. They have now let two race wins slip through their fingers in as many grands prix.

Melbourne was lost because they got the numbers wrong - the gap they needed to keep Vettel behind if there was a virtual safety car period was miscalculated. There was one, and Vettel took a lead he didn't really deserve.

Unknown to anyone outside Mercedes at the time, Hamilton suffered a hydraulic leak in his gearbox during that race, which caused damage that meant it had to be changed. And that meant a five-place grid penalty in Bahrain.

As if that was not bad enough, Mercedes were on the back foot pace-wise throughout practice and qualifying. Hamilton appeared to be in particularly bad shape and he ended up qualifying fourth, behind Bottas, which meant a start in ninth.

A cautious run into the first corner left him with a lot to do but, after surviving the collision with Verstappen, he made up three places in one go, in a typical piece of Hamilton opportunism and skill, passing Fernando Alonso's McLaren down the straight before lunging inside Esteban Ocon's Force India and Nico Hulkenberg's Renault into the first corner.

That set him up for the run to what probably would have been fourth, had it not been for Raikkonen's problem.

"It's a great result," Hamilton said. "We would prefer we didn't have the gearbox issue but I was really happy with the race pace."

Team boss Toto Wolff did not sound as happy, aware that although Mercedes had expected it to be a race of damage limitation, their pace was better than they thought it would be.

"What was interesting was that the pace of the Ferrari was not as good as we expected after (qualifying)," he said. "They were fuel saving straight from the beginning, which for sure cost them performance.

"I think we could've probably have been able to go a bit quicker than the Ferraris. I don't know when Sebastian started to fuel save - Kimi pretty early on - but if he was not fuel saving, we were at least on the same pace on the super-soft tyre. On the medium, our pace was very satisfying but we obviously didn't see that tyre on the Ferrari.

"If you add the points we haven't made over those we could've made, it could decide the championship. Seven points probably lost for Lewis in Melbourne. I don't think he'd have been better than P3 today because Sebastian was too far away.

"So drivers' championship seven points, constructors' we lost seven in Melbourne and seven today. Those 14 points could make a difference in the end."

Mercedes have an immediate chance to strike back in China this weekend. It is one of Hamilton's best tracks and he is well aware that he needs to make it count.

"Shanghai has been a good hunting ground for me so I really hope we can go there with some strength," he said. "This has been a tough weekend for us. Ferrari have shown they are a force to be reckoned with.

"We have a serious fight on our hands and it is going to take a unified group strength to try to fight them away. It is close but we definitely have to do a better job." 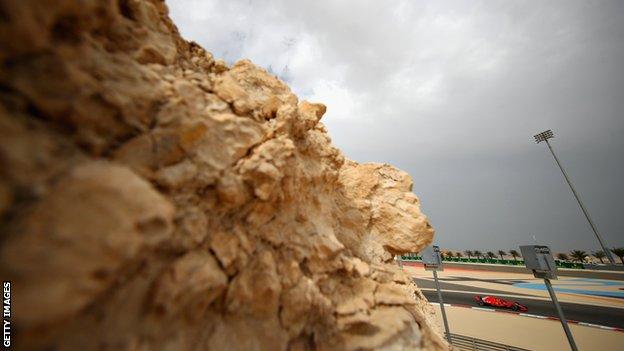