Mark Webber isn't happy with Williams' inexperienced driver line-up as the former F1 driver feels the sport should not be used as a "finishing school".(Fox Sports Asia)

Sebastian Vettel believes Ferrari's 2018 Formula 1 car is not currently "a true match" for Mercedes, despite having beaten Lewis Hamilton to victory in the Australian Grand Prix.(Motorsport.com)

Fernando Alonso says McLaren's next target is catching Red Bull after his fifth-place led home a double-points finish for the team at the Australian GP. (Sky Sports) 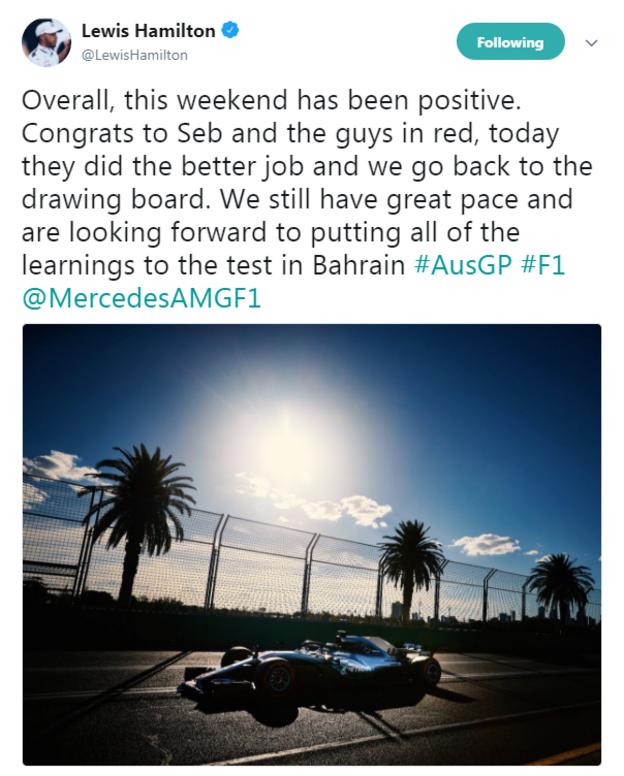 Lewis Hamilton is almost unbeatable when he is on top form - but it's impossible to maintain that level all the time, according to Mercedes boss Toto Wolff.(Daily Express)

Formula 1 and Netflix have announced a partnership that will see the streaming giant produce an original docu-series based on the 2018 season. (Motorsport Week)

Red Bull team principal Christian Horner has called for Formula 1 officials to be given more leeway in issuing penalties after Daniel Ricciardo was given an Australian Grand Prix grid drop. (Autosport)

He may be starting the Australian Grand Prix from the front row of the grid but Kimi Raikkonen is far from satisfied with Ferrari's early season qualifying pace. (ESPN F1)

Lewis Hamilton has been linked with potentially replacing Daniel Ricciardo at Red Bull for next season if the Australian does not sign a new contract. (Daily Express)

Formula 1's former commercial supremo Bernie Ecclestone has warned owners Liberty Media to take the threat of a breakaway series seriously and said Mercedes could follow Ferrari out of the championship.(Reuters)

Formula 1's technical and financial future must be conceived without input from the teams because getting their agreement is "impossible", according to Red Bull's Christian Horner. (Autosport)

Race director Charlie Whiting says fans will definitely know who is behind each Halo, they just need to look at the car numbers, helmets and cameras.(Planet F1)

Sebastian Vettel has warmed to the idea of Red Bull's Australian Daniel Ricciardo joining him at Ferrari next year. (SBS)

Max Verstappen fears that Red Bull is still going to face a "painful" time on the straights, with the team's engine supplier Renault having yet to close the gap on Mercedes. (motorsport.com)

Sergio Perez believes Force India is facing its "biggest challenge" in Formula 1 since he joined the team. (motorsportweek.com)

The FIA has added a third DRS zone to the Australian Grand Prix circuit in an effort to boost overtaking in Sunday's opening race of the 2018 Formula 1 season. (autosport.com)

Mercedes boss Toto Wolff has warned that a breakaway series to rival Formula 1 is a "realistic" possibility if the championship's stakeholders fail to placate Ferrari in their long-term vision for the sport. (Reuters)

Lewis Hamilton says that the relentless work ethic throughout Mercedes' entire team motivates him to be at his best on race weekends. (Daily Express)

A refreshed and hungry Hamilton has declared he's ready to take the new Formula 1 season by the scruff of the neck. (Daily Mail)

McLaren's executive director Zak Brown will skip the Japanese Grand Prix later this year so he can attend the Bathurst 1000. (Motorsport.com)

Daniel Ricciardo has declared he wants to make a "statement" for Red Bull Racing in his home grand prix and also provide a key boost for himself in a year when he is out of contract. (Sydney Morning Herald)

Fernando Alonso is relishing the return of Formula 1 after a "long" winter away. (Daily Express)

Pascal Wehrlein admits it feels "weird" not being on the F1 grid when drivers he beat as team-mates are contesting the 2018 season. (Crash.net)

Lewis Hamilton is set to sign the biggest contract in British sporting history should he re-sign with Mercedes on a three-year £120m deal. (The Sun)

McLaren racing director Eric Boullier insists the reliability issues that dogged them and Fernando Alonso throughout pre-season testing have been sorted. (Motosport)

Nico Rosberg says drivers will have to 'pounce' on Lewis Hamilton's periods of inconsistency if they are to have a chance at beating him to the F1 championship. (Planet F1)

"Sometimes people avoid their greatest fears" joked Daniel Ricciardo after Lewis Hamilton didn't mention the Australian as one of his closest challengers this season. (The New Daily)

Former F1 driver Mark Webber would be "flabbergasted" if Ferrari quit Formula 1, but hasn't ruled out the manufacturer leaving the sport in 2021. (F1i.com)

Melbourne Grand Prix organisers are expecting the biggest crowd in a decade in anticipation for the start of the F1 season this weekend. (Speed Cafe)

World champion Mercedes driver Lewis Hamilton says "red is my favourite colour" but "loyalty is a value my father taught me" and he's "not the type that jumps from here to there". (F1i.com via La Repubblica)

Mercedes boss Toto Wolff expects Lewis Hamilton to sign a new deal with the team but believes the Briton "has at least one more contract in him after this next one and Ferrari remains an attraction for every driver".(Mail)

FIA president Jean Todt is open to having new races in Argentina and Vietnam added to the race calendar.(Crash.net)

Force India driver Esteban Ocon says this "is one of the most important years of my career" as he tries to impress and earn a seat at Mercedes. (Autosport)

Haas racer Romain Grosjean believes the outfit's car for the 2018 season is the "best" the team have had. (Planet F1)