Red Bull Racing's Max Verstappen does not like being compared to legendary drivers such as Ayrton Senna. "I try to keep focusing on myself," says the Dutch driver, 20. (PlanetF1.com)

F1 lacks depth of competition and needs to extend the size of the grid, according to 1992 world champion Nigel Mansell. The sport has not hit its maximum 26-car grid quota since the 1995 Canadian Grand Prix. (Autosport)

Meanwhile, Alonso's chances of winning this weekend's Daytona 24 Hours on his sportscar debut have all but been dismissed by McLaren and United Autosports team boss Zak Brown. (Autosport)

This year's British Grand Prix will feature two support races with iconic F1 cars from the 1970s and 1980s. (Formula1.com)

But 20-year-old Belgian Max Verstappen has little interest in the history of the sport, revealing that historic F1 cars do little for him. (Pitpass)

Formula 1's top teams are unhappy with plans from the sport's new owner Liberty Media to adopt a 'one stop tent' for all merchandise sales at races as opposed to the individual stalls they currently have. (GP Today)

Double world champion Fernando Alonso was satisfied with his first-ever sportscar qualifying performance before his debut in the Daytona 24-hour endurance race, getting within a second of pole position. (Motorsport)

Former world champion Nigel Mansell says the sport cannot do without Ferrari and will face "great challenges" if they let any manufacturer walk away. (Sky Sports)

Mercedes boss Toto Wolff expects Ferrari driver Sebastian Vettel to be linked with a move to the 2017 champions after the pair met while skiing, but says they are "just friends and neighbours". (Koln Express, via PlanetF1)

Toro Rosso's 2018 Formula 1 challenger will hit the track for the first time on 21 February when it completes a filming day at Misano. (Autosport)

Fred Vasseur has revealed how he cancelled Sauber's plans to tie up with Honda on his first day in charge of the team. (Motorsport.com)

Force India are setting an example of how to achieve success on a limited budged that Renault should follow, says the French team's boss Cyril Abiteboul. (Autosport)

Haas F1 driver Romain Grosjean was snapped about to pedal into the danger zone... 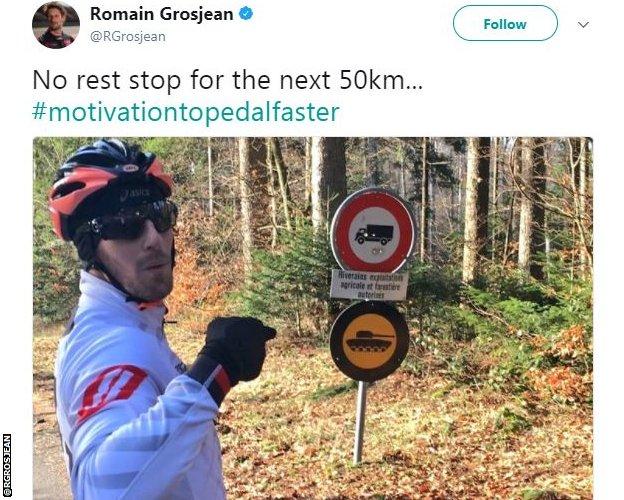 Williams chief technical officer Paddy Lowe says reserve driver Robert Kubica could be given a race seat in 2019. The Pole has not raced in F1 since suffering life-changing injuries in a rally crash seven years ago. (Championat, via Planet F1)

Haas driver Romain Grosjean feels he could race in Formula 1 until the age of 40. The Swiss has completed six full seasons in the sport. (Autosport)

Force India are evaluating the possibility of a name change before the new season in order to take advantage of commercial opportunities. (Racer)

Renault driver Carlos Sainz will emulate his father when he makes his first rallying appearance at this week's Monte Carlo Rally. (Sky Sports)

Williams chief technical officer Paddy Lowe says the team missed out on some points last season because of rookie driver Lance Stroll's inexperience and the drivers not exploiting their car's full potential. (Racer)

Renault's Carlos Sainz Jr, whose father is a double world rally champion, will venture into rallying when he runs the VIP course car that checks the layout before the final stage of the Monte Carlo rally. (Planet F1)

The research group working on making F1 more of an on-track spectacle have prioritised the three areas of aerodynamics, engine and suspension for future rule changes. (ESPN)

Force India, who finished fourth in the constructors' championship in the past two years, think they will face a "significant" threat from McLaren and Renault next season. (Motorsport.com)

Fernando Alonso could have won more than his two world drivers' titles but "there is always a mess wherever he is" as the McLaren racer "generates a lot of problems", according to former champion Nelson Piquet. (theCheckeredFlag.co.uk via La Sexta)

The retired Nico Rosberg says Lewis Hamilton "is a really good guy with some good values" and that "one day we can get back to getting on better" after the pair fell out during their final season together as Mercedes team-mates in 2016. (Planet F1)

Sergey Sirotkin was chosen by Williams to replace Felipe Massa after a test in which the Russian "made no mistakes", according to the team's chief technical officer Paddy Lowe. (F1i.com)