McLaren driver Stoffel Vandoorne says the team is under "big" pressure to perform following their switch to Renault engines. After splitting with Honda, McLaren will run the same engines as Red Bull and works team Renault. (Planet F1)

The FIA is finalising plans for a minimum F1 driver weight of 80kg in 2019 to ensure that heavier drivers are no longer penalised. (motorsport.com)

Mercedes' view on team dynamics and how they should work have changed following the successful pairing of Valtteri Bottas and Lewis Hamilton. (Autosport)

Sauber rookie Charles Leclerc feels the team will gain a big benefit from switching to an up to date Ferrari engine this season. Last season the team used a one-year-old power unit. (Planet F1)

Mercedes boss Dieter Zetsche says his team and Ferrari may be fierce rivals on the track but off it they "are 100% aligned" on their thoughts in Formula 1 and their strategic actions. (Autocar)

The subject of Ferrari losing its power to veto F1 rule changes will be considered by Jean Todt, the president of motorsport's governing body the FIA. (F1i.com)

McLaren racing director Eric Boullier is not worried by Renault's reliability as he believes the engine supplier "has has taken the necessary measures and made great efforts to make progress in this area". (Planet F1, via Auto Hebdo)

IndyCar racer and former Formula 1 driver Sebastien Bourdais has responded to claims by Haas team boss Gunther Steiner that there are no American drivers ready to compete in F1 by saying he understands "that the American drivers take it personal because it's not fair". (Autosport)

Vietnam could soon be included on the F1 calendar, with a street race expected to be announced in the coming weeks. (Forbes)

Mercedes and Ferrari will both unveil their 2018 cars on 22 February. (Sky Sports)

Daniel Ricciardo says Red Bull team principal Christian Horner reassured him he will have a fair fight with Max Verstappen in 2018 after favouritism concerns. (Autosport)

World champion Lewis Hamilton has been brushing up on his snowboarding skills on a trip to Japan. (Daily Mail)

Sergey Sirotkin's father says the young Russian secured the Williams seat because he was "stronger" than Kubica. (F1today.net)

Toro Rosso driver Brendon Hartley reminds us of his happy day as he prepares to leave New Zealand to begin work for the 2018 season. 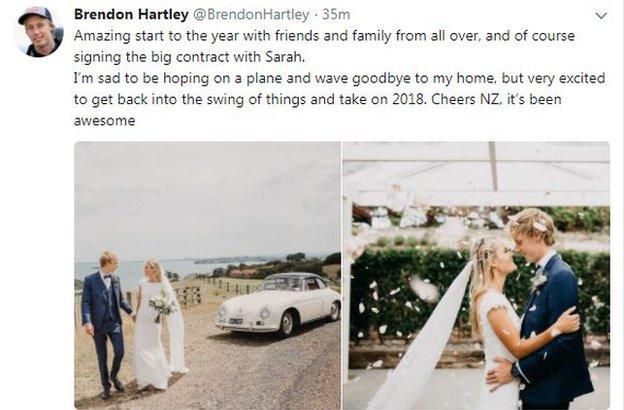 Retired former world champion Nico Rosberg says he would be willing to return to the sport to race in a Las Vegas Grand Prix. (YouTube)

Daniil Kvyat's role at Ferrari remains a mystery after Antonio Giovinazzi appeared to indicate he would be taking on any third driver duties with the team.(Daily Express)

F1 bosses will present their vision for the future to all current race promoters at a conference in London on Wednesday as they look to improve the race weekend product as a whole.(Autosport)

Lewis Hamilton has returned to social media with a post advertising watches. He posted an Instagram 'story' having deleted several years' worth of his social media entries over Christmas. He also later posted an image of himself snowboarding. (Instagram)

Nigel Mansell, who won his title in 1992, believes McLaren will find it tough to go up against Red Bull and the works Renault team with the same engines in 2018. (Autosport)

Britain's Paul di Resta says he was only removed from contention for the Williams F1 seat in the last three weeks and believes he proved his pace in the car to the team. (Express)

Former Manor driver Max Chilton says F1 teams are guilty of missing talented drivers in IndyCar because of a fixation on junior categories in Europe. (ESPN)

FIA president Jean Todt says a budget cap alone will not solve the problem of rising costs in Formula One. (Motorsport)

F1 bosses Liberty Media could face legal action from 3M, the makers of Scotch Tape and Post-it Notes, over the style of 'F' used in its new-look logo for the sport. (Telegraph)

Indianapolis 500 winner and multiple Champ Car champion Gil de Ferran says the Haas team's claims that there are no American drivers good enough for F1 at the moment are 'unfair'. (Autosport)

Paul di Resta says he was "within touching distance" of getting an F1 drive with Williams, but feels his age may have worked against him. (Crash.net)