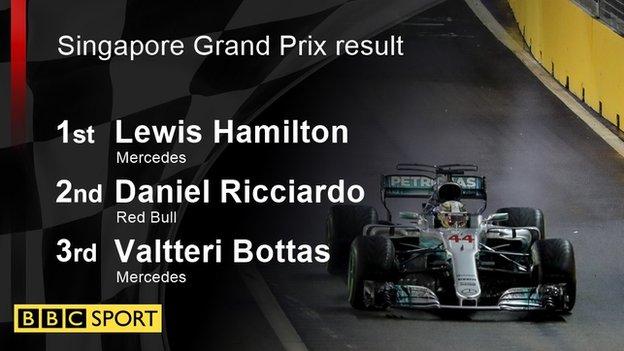 Lewis Hamilton drove a masterful race to win the Singapore Grand Prix and take a stranglehold on the title as rival Sebastian Vettel crashed out.

Hamilton, who started fifth after struggling in qualifying, was leading within four corners after Vettel collided with Ferrari team-mate Kimi Raikkonen and Red Bull's Max Verstappen at the start.

It could be a defining moment in the championship. Vettel was expected to re-take the lead at a track on which Ferrari had an advantage over Mercedes. Instead, Hamilton heads into the final six races of the season with a 28-point advantage.

Hamilton did so after one of his most impressive drives. Mercedes went into the race thinking about damage limitation, with team boss Toto Wolff talking about the best possible result being to limit the loss of points to Vettel.

But the Briton managed to avoid the chaos on the run to the first corner and slotted into the lead ahead of Daniel Ricciardo.

The Australian would have been expected to challenge Hamilton, Red Bull having had a clear pace advantage over Mercedes all weekend.

But Hamilton began reeling off fastest laps, and he remained serene through a madcap race that started wet, was dry for almost half its distance, featured three safety cars as a result of a series of incidents and ran to only 58 of its scheduled 61 laps because of the two-hour time limit.

The first safety car came almost immediately. Despite heavy rain falling and a wet track, the race started competitively rather than behind a safety car.

Verstappen, starting second, made a better start than Vettel did from pole, but both were out-done by Raikkonen, who moved to the inside and was soon edging ahead of the Red Bull.

Not knowing his team-mate was there, Vettel veered aggressively across the track to defend from Verstappen, leaving the Dutchman nowhere to go.

Verstappen tried to edge left to avoid Vettel, but he and Raikkonen touched, the Finn spun and collected his team-mate.

Raikkonen slid sideways down the track and hit Verstappen broadside at the first corner, the two careering into Fernando Alonso's McLaren, which was briefly up to third place behind Vettel and Hamilton and ahead of Ricciardo as he took his usual outside line at the first corner.

Alonso's car was launched, and spun in mid-air, damaging his floor and side-pod and leading to his retirement after a few slow laps.

Vettel, who was in scintillating form in taking pole on Saturday, tried to continue, but his car was badly damaged, its front wing missing and fluid leaking from the rear.

This caught him out as he accelerated out of Turn Three, and he spun into the wall after losing grip on his car's own fluids at Turn Four. He was told to retire before getting halfway around the first lap.

Reaction to the incident

All three men were called to the stewards to explain the incident but officials decided that "no driver was wholly or predominantly to blame" and decided to take no further action.

Vettel said: "I didn't see that much. I saw Max and then the next thing I see is Max and Kimi hitting me somewhere. It doesn't change much. Obviously we are not in the race and can't show the pace we have."

Verstappen said: "I think mainly Sebastian started squeezing me. Maybe he did not see Kimi on the left but that is not an excuse. He shouldn't take those risks.

"Lewis is leading the race and the three of us are out. I don't think it was a racing incident. Three cars were taken out and I was in the middle not doing anything wrong. We will see what happens."

Raikkonen said: "I don't know, there are always different views and I could not do anything to avoid it."

A let down for Red Bull

The result will be a disappointment for Red Bull, with Ricciardo having said before the race that he was confident of winning.

Instead, handicapped within a few laps by a gearbox problem, he found that whatever he threw at Hamilton, the Mercedes driver was more than able to answer and he had to settle for second.

Mercedes benefited doubly from the chaos at the start - Hamilton's team-mate Valtteri Bottas, who struggled for pace all weekend, finished third, strengthening the team's hold on the constructors' championship.

There was some succour for Red Bull, as their junior driver Carlos Sainz drove an excellent race to take fourth for Toro Rosso after being ninth on the first lap, moving ahead of Force India's Sergio Perez, Renault's Jolyon Palmer, McLaren's Stoffel Vandoorne and Force India's Esteban Ocon, who were all ahead of him on the first lap.

Sainz did benefit, however, from the retirement of Renault's Nico Hulkenberg, who was running fourth when he had to stop because of an engine oil leak on lap 38.

Sainz's team-mate Daniil Kvyat was the cause of the second safety car when he crashed on lap 11 at Turn Seven, Sauber's Marcus Ericsson triggering the third when he spun out of Turn 12 and ended up facing the wrong way on the narrow Anderson Bridge.

Perez took fifth, Palmer enjoyed the best result of his F1 career in sixth and Vandoorne was seventh.

There's a two-week break before another brutally hot race in Malaysia, on a very different circuit. On paper, Sepang looks like a Mercedes track and Hamilton will go into the weekend as favourite and looking for a fourth win in a row. Weather is often a factor there, too.

Race-winner Hamilton: "I want to congratulate my team, they did a fantastic job. We struggled yesterday and we had no idea what would happen today. We were fortunate with what happened with the Ferraris at the beginning but I could not be happier.

"I capitalised on the incident. Who would know what would happen? Daniel put up a really good fight today. I hoped I would get to race Sebastian at the beginning. Of course it is better the way it is."

Ricciardo: "We didn't have the Friday pace, little disappointed to miss out on a win but I am still grateful with another podium.

"I watched the chaos unfold in front of me. It was probably good that I had a bad start. It looked like three tried to go into one. I don't know whose fault it was."

Bottas: "The car was working better than expected and I was just waiting for opportunities. I struggled in the wet but in the dry it was pretty good. There are still plenty of races to come and plenty of opportunities. Sebastian Vettel is my next target."