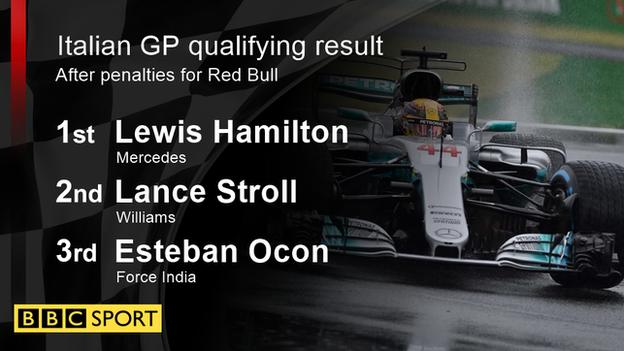 Lewis Hamilton broke the all-time record for pole positions by taking the 69th of his career with a sensational performance in wet qualifying at the Italian Grand Prix.

Hamilton was 1.148 seconds quicker than Red Bull's Max Verstappen in second place as title rival Sebastian Vettel of Ferrari could manage only eighth.

But Vettel will start sixth because of grid penalties for Verstappen and team-mate Daniel Ricciardo, who was third.

The Williams driver finished ahead of another notable performer as Frenchman Esteban Ocon took fifth in the Force India.

Hamilton's pole moves him one ahead of Ferrari legend Michael Schumacher and it was a performance worthy of such a momentous achievement.

Conditions were awful - the first session was stopped after just one lap for seven drivers and did not start again for more than two hours.

When qualifying did finally re-start at 4.40pm local time - two hours and 40 minutes after it originally began - the track was still wet.

But Hamilton was a contender at the front throughout - second in the first session to Mercedes team-mate Valtteri Bottas and fastest in the second session from the Finn by more than 0.7secs.

But he saved the best until last. With the rain coming down harder again, the Red Bulls looked like they might be hard to beat but Hamilton pulled out a superb lap as the clock ticked down to zero to put it well beyond doubt.

"I am so happy," Hamilton said. "To do this here in such a historic circuit and beautiful country, I am going to have some pasta tonight to celebrate."

Hamilton's position at the front of the grid, with Vettel only sixth, gives him a great opportunity to take the outright championship lead for the first time this season.

He heads into the race seven points behind Vettel - the difference between first and second places - but has his team-mate Bottas, who will start fourth after qualifying sixth, as a buffer between him and Vettel.

Bottas was 2.279 seconds slower than Hamilton in the final session, underlining the quality of the Briton's performance.

With dry weather expected for the race and the pace Mercedes showed in similar conditions on Friday, Ferrari may find it difficult to beat Bottas.

Vettel has team-mate Kimi Raikkonen one place ahead of him on the grid.

Vettel said he did not understand why the red cars lacked pace in wet conditions - Raikkonen was 2.433secs off Hamilton with Vettel just 0.077secs adrift of his team-mate.

"I was surprised by how quick the others went," Vettel said. "We could not go the same pace. We don't know why at this stage. It was an important day; something did not come together. There are a couple of things we need to look into and try to understand."

But he said he was confident of recovering in the race.

"It should be more fun starting a bit further back," Vettel said.

"We can make up a lot of ground, the car is quick and you can overtake here, so we should be OK. It should be a fun race."

Stroll and Ocon may not be easy for the Ferraris to pass.

Their cars are not as fast as the Ferrari but they have a powerful Mercedes engine and will be keen not to surrender position lightly, especially after such superb performances on Saturday.

Ocon was already earmarked as a future star and he underlined his quality with accomplished driving in difficult conditions.

Stroll has had a more up-and-down rookie season - superb in taking a podium finish in Azerbaijan in June, but largely off the pace elsewhere.

But in the treacherous conditions of Monza in the wet he excelled, and left experienced team-mate Felipe Massa trailing five places and 1.219secs behind in ninth place.

"I'm going to have Stroll alongside and Ocon behind - wow, that's awesome," added Hamilton. "These young kids coming along and keeping me on my toes. It shows great promise for them."

The final man in the top 10 is McLaren's Stoffel Vandoorne, also impressive in the wet conditions, which do not expose the lack of power of the Honda engine as much as the dry does.

Red Bull to drop back

Verstappen and Ricciardo will be at the back of the grid because of a series of engine penalties.

They will join McLaren's Fernando Alonso back there as well as Renault drivers Jolyon Palmer and Nico Hulkenberg, and Toro Rosso's Carlos Sainz, all suffering for the same reason.

Their exact order will be revealed by governing body the FIA ahead of the race.