The FIA has released a video outlining the purpose and design benefits of the controversial Halo device, which will be introduced into Formula 1 in 2018. (F1Today)

Haas F1 Team boss Gunther Steiner feels the rise of Formula E is no threat to Formula 1, despite big names like Mercedes entering the sport from 2019-20. (Speedcafe)

London rush hour showed no mercy to retired F1 world champion Nico Rosberg who tweeted his race against the clock to catch a flight.(Twitter) 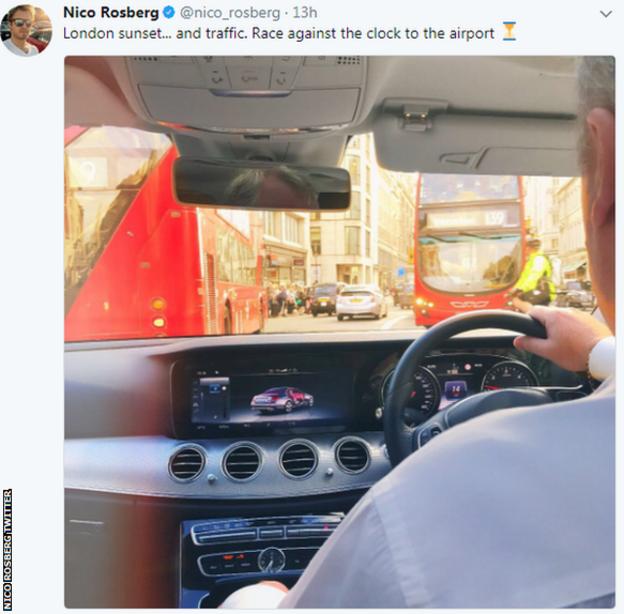 Valtteri Bottas has said he does not want to be in his Mercedes' team-mate Lewis Hamilton's shadow, saying that there "is no number one or number two driver". (F1i.com)

Max Verstappen says he will probably speak to Daniel Ricciardo again after the Red Bull duo crashed into each other at the weekend. (Motorsport)

The thickness of Formula 1's halo cockpit protection device could be reduced as the FIA plans to "see how much we can push" the controversial design. (Autosport)

Polish driver Robert Kubica was seventh quickest on his return to F1 testing, six years after his career was stalled by a rallying crash.(Eurosport)

Williams chief technical officer Paddy Lowe says the team are open to considering Paul di Resta for a return to F1 next season after the Briton returned during the Hungarian Grand Prix. (Crash)

Ferrari says it is considering moulding Sauber into a junior team for its young drivers. (Motorsport.com)

Valtteri Bottas described his fellow Mercedes driver Lewis Hamilton as a "real team player" for agreeing to swap places on the last lap of the Hungarian Grand Prix. (Mercedes)

Ferrari are expected to retain both Sebastian Vettel and Kimi Raikkonen for 2018 - with president Sergio Marchionne saying it is"too early" to consider a move for Hamilton. (Motorsport.com)

Fernando Alonso achieved McLaren's best result with his sixth place in Budapest and says he was surprised to set the fastest lap of the race. (ESPN)

Renault's Nico Hulkenberg and Haas rival Kevin Magnussen both traded insults after their clash at the Hungary Grand Prix. (Autosport)