Chief F1 writer at the Hungaroring

Sebastian Vettel hung on to win a tense Hungarian Grand Prix despite problems with his Ferrari and a valiant attack by title rival Lewis Hamilton.

In a nail-biting finish, Vettel had his team-mate Kimi Raikkonen behind complaining that he could go faster but being used by the team as a buffer against Hamilton.

The Mercedes driver closed in but was unable to overcome the problems created by losing grip in the wake of another car.

And he let team-mate Valtteri Bottas past into third place, honouring a promise he made earlier in the race when the Finn moved aside to let Hamilton attack the Ferraris.

Vettel's victory with Hamilton in fourth extended his championship lead to 14 points as Formula 1 heads into its four-week summer break.

Hamilton's challenge for victory was unexpected after a weekend in which he and his Mercedes team had struggled for pace compared to Ferrari.

Vettel and Raikkonen dominated the first half of the race, in which it was already clear that the German was managing some form of handling problem and that the Finn was being asked to hold station behind.

It emerged that his steering was not working properly in left-handed corners.

The switch to harder tyres at the pit stops changed the complexion of the race and gave Mercedes the pace to challenge.

Hamilton had suffered with radio problems in the first part of the race, unable to consistently hear his team.

It righted itself after the pit stops as Hamilton was closing on Valtteri Bottas as the Finn was doing the same to the Ferraris.

Hamilton asked to be allowed past his team-mate to attack the Ferraris, saying: "OK, man. I've got a lot of pace. You've got to let me use it. And this radio rubbish sucks."

Hamilton pledged that he would allow Bottas back past him if he could not overtake a Ferrari.

Bottas complied and Hamilton set about the Ferraris, but although he closed on Raikkonen he was unable to pass, his car's aerodynamics too badly affected by the wake of the Ferrari on this tight and twisty track for him to get on to Raikkonen's tail.

Raikkonen complained that he was "uncomfortable" with the situation but he played his role perfectly, with Ferrari president Sergio Marchionne watching from the pits.

It affirmed Raikkonen's position as a team player and will only make it more likely that he will be retained for next year as long as Vettel also stays. 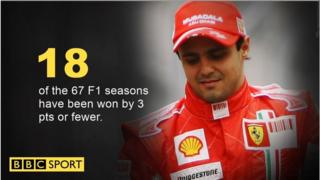 Since the very first Formula 1 world championship in 1950, 27% of seasons have been decided by three points or fewer

Verstappen will have some explaining to do after the race following the first-lap incident in which he took out team-mate Daniel Ricciardo.

The Australian had passed Verstappen on the outside on the run to Turn Two, after the Dutchman was forced wide by Bottas on the exit of Turn One.

But although Ricciardo was clearly ahead, Verstappen left his braking too late on the inside, and slid into his team-mate, smashing his radiator. Ricciardo spun into retirement on fluids from his own car at Turn Three, bringing out the safety car.

Ricciardo said: "It's frustrating. It's not even an overtaking move. It's an emotional response - sees me pass him, wants to make it back and messed it up.

"I don't really know… in that moment I expect (the team) to say sorry and they will speak to Max and that's what they said. I don't know.

"Look, the way Max handles it, more than the way I handle it, will dictate how it goes in the future. For sure I can go and call him names but if he acts like the age he is, or if he acts like a man and admits the mistake."

Verstappen's move earned him a 10-second penalty, served at his pit stop, which made it more difficult for him to challenge the Mercedes at the end.

Vettel said: "I am over the moon. It was a really difficult race. I had my hands full from three to four laps after the safety car, the steering started to go sideways and it started to get worse. It wasn't easy but it didn't do a favour to Kimi who could obviously go faster.

"You go down the straight and it's not straight. In right-handers it was OK, but in left-handers you had to go further than your head is telling you you should.

"I tried to hang in there as much as possible. The race felt very long."

On extending his championship lead, Vettel said: "I don't mind. It's OK. Could be worse."

Bottas said: "For sure in the end I was getting little bit worried because I was losing ground with all the backmarkers. So really thanks to Lewis for keeping his word."

An honourable mention, too, to Fernando Alonso, for his battling sixth place, forced to overtake Toro Rosso's Carlos Sainz on track after being passed off the line, by far McLaren's best result of the season. He celebrated by posing on an image of his famous 'deckchair' moment from Brazil a couple of years ago that was painted on the pit lane.

The teams are forced to take two weeks off work during the four-week break. The next race, the Belgian Grand Prix, should be very much a Mercedes track, and a chance for Hamilton to close up again on Vettel in the championship.