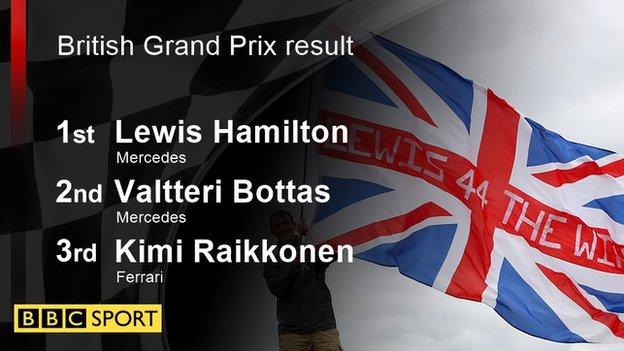 Lewis Hamilton took a dominant victory at Silverstone to tie the all-time record of five career wins in the British Grand Prix.

The Mercedes driver equalled the tally of Scot Jim Clark and Frenchman Alain Prost with his fourth home win in a row to add to his first win for McLaren in 2008.

Hamilton's victory cut his deficit to Ferrari's Sebastian Vettel to just one point in the championship as the German suffered a front-left tyre failure when running third with two laps to go, dropping to seventh.

Following the podiums celebrations, Hamilton went down to see the crowd, surfing on their outstretched hands and high-fiving as he ran past the adoring throng.

"The support has been incredible this weekend," he said. "I am so proud I could do this for you all. Now the plan is to win the championship."

What an easy way to make history

The drama all unfolded behind Hamilton, whose 57th career victory was among the most straightforward, on a weekend which he started 20 points behind Vettel and needed everything to go his way.

The 32-year-old converted pole position - earned with a spectacular lap on Saturday afternoon - into a first-corner lead and simply drove off into the distance.

Hamilton was 1.6 seconds clear after the first lap before the race was neutralised by a safety car following a collision between the Toro Rosso drivers.

After the restart on lap five, Hamilton edged clear, building a 3.1-second lead after 12 laps and five seconds after 18, before he began to cut loose as the pit stops approached.

Suddenly Hamilton was lapping a second faster than Raikkonen, pulling out five seconds behind Raikkonen made his pit stop on lap 24, Mercedes calling Hamilton in for his stop on the next lap.

Hamilton returned to the track with a 10-second lead over Raikkonen and cruised to the flag as attention now turned to the battle for the remaining podium positions. 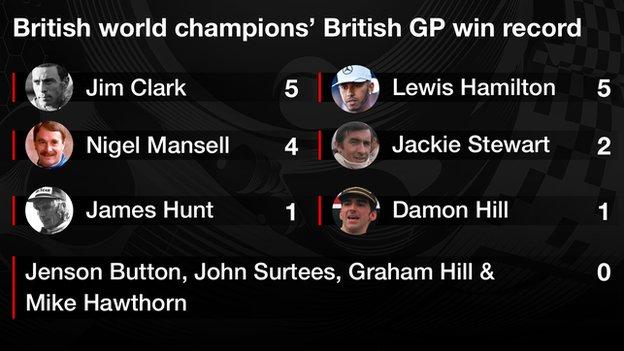 Bottas was on an inverted tyre strategy, starting on the soft tyre from ninth place after a five-place penalty for changing his gearbox.

He ran long on his first stint, battling past the cars in front of him and up into fifth place by lap five and then not stopping until lap 32 and rejoined 4.2 seconds behind Vettel with 18 laps to go.

Bottas was soon setting fastest laps and was on Vettel's tail by lap 42.

A first attempt to pass around the outside of Stowe ended with Vettel forcing him wide, but the Ferrari driver then locked a wheel into the tight Vale corner, damaging a front tyre.

Bottas swept by on the Hangar Straight a lap later and set off after Raikkonen. It looked as if the Ferrari driver would hang on until his tyre lost its tread on lap 48, Vettel's going the same way a lap later.

Vettel in the early laps of the race had had a tense fight with Red Bull's Max Verstappen, the two banging wheels out of Stowe corner, Vettel forcing the Dutchman wide and the having the favour returned.

Verstappen hung on but was passed at the pit stops, but he came home fourth after Ferrari's problems.

The Hungarian Grand Prix on 28-30 July is the final race before F1's four-week summer break. It's a tricky circuit with a lot of long corners, and a place where Mercedes might be expected to again have an advantage over Ferrari.

It is the perfect opportunity for Hamilton to take the championship lead outright for the first time this year.

And Hungary is a race where Hamilton already holds the record for most wins in the history of the sport with five. Bodes well...

Winner Lewis Hamilton: "It's never easy. The team were faultless all weekend. Valtteri had an incredible drive to go from ninth.

"I am coming out to crowd surf over there later guys!"

Second placed Mercedes team-mate Valtteri Bottas: "I'm really happy today, It was not an easy race to start from P9. The team did a perfect strategy and I just kept my head down. It's a perfect weekend and well done to Lewis."

Third placed Kimi Raikkonen: "Mercedes were just a bit faster today. And, unfortunately, unlucky situations seem to be following us at the moment.

"It's an unfortunate situation with the tyre at the end but luckily the car stayed in one place. Not happy but we made the best of a bad situation." 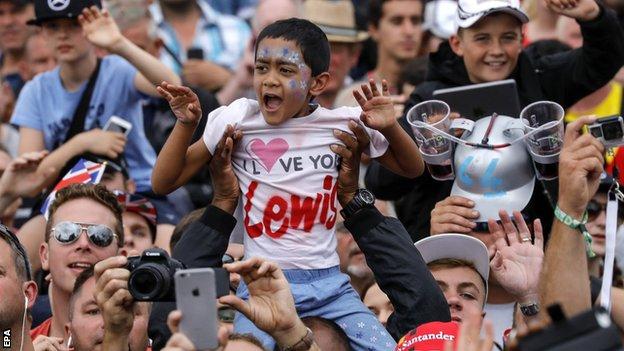 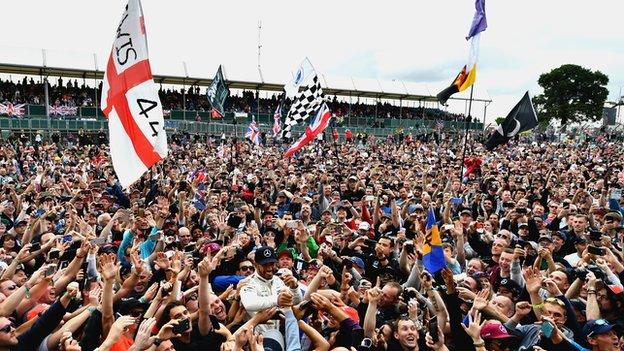