It's 1am in Indianapolis. The lights on a small jet periodically light up the dark sky as it approaches the runway before landing and then pulling into a private hangar.

Outside the airport an enthusiastic crowd has gathered. The moment a diminutive figure steps through the exit doors they go wild.

If Fernando Alonso expected an inconspicuous arrival, he was mistaken.

Alonso mania in America has well and truly arrived.

"On every TV and radio show it is all about Fernando. The other drivers keep calling themselves 'the other 32' and keep making references to the fact that if no-one asks them a Fernando Alonso-related question in press conferences, it's a big surprise."

The Spaniard's decision to skip this weekend's Monaco Grand Prix to take part in the Indy 500 was already big news in the world of motorsport.

This was a two-time Formula 1 world champion deciding to give the sport's jewel-in-the-crown event a miss in favour of a race that, while hugely popular in America, doesn't resonate globally to anywhere near the level F1 does.

It works both ways, though, with F1 viewed as a niche sport in the US. Indeed, Alonso was such an unknown before his Indy 500 announcement that America was often his close-season destination of choice for a quiet getaway.

"I don't think Indianapolis will be the place for him over Christmas for a quiet holiday because he will definitely get recognised," Smith added.

"There will be no more nonchalantly making the trip over here. People are actually getting on the flight trackers and following his arrival. They will know when he is here now."

So why is Alonso a big deal?

It's common for a driver who has raced in F1 to compete in the Indy 500.

Just last year Alexander Rossi, who entered a handful of races in 2015 for the now defunct Marussia team, won at Indianapolis on his debut.

However, this is Alonso. A world champion at the pinnacle of motorsport not just once, but twice. Even if the sport isn't one of the most popular in America, such a feat still resonates.

"It doesn't matter if he won his last world title over 10 years ago, no-one holds that against him," Smith adds. "He is still being talked about as world champion whether that was 2006 or last year.

"People here take a lot of stock in someone winning a world championship. Everybody is excited."

People are indeed excited. When Alonso took part in his first official test earlier this month, more than two million people watched on YouTube. Meanwhile, tickets for Sunday's Indy 500 have been selling like the proverbial hotcakes.

"I talked to Doug Boles, president of Indianapolis Motor Speedway, and he said they had a spike in ticket sales when that announcement that Alonso was doing Indy 500 came," added Smith.

"He said it pushed them over the 300,000 spectator ticket mark, just from that announcement. Alonso alone contributed to ticket sales."

'The dads are talking about it at football practice'

Alonso has had tongues wagging all across the US.

Former Red Bull chief mechanic Kenny Handkammer was one of the most successful engineers in F1 racing after being part of 13 world championship title wins. He now works for Tesla and lives in California.

"The hype it has got is huge, it is outstanding," he says.

"Everyone is talking about it. I take my son to play football at the weekend and all the dads are saying: 'Did you see Fernando? He has got up to speed really quickly.'

"I am getting that just from people I know without the rest of the media attention."

'Bigger than Mansell in IndyCar'

Back in 1993, Nigel Mansell caused a considerable stir when the Briton went to compete in IndyCar just one year after winning the F1 world championship.

Mansell won his first race in the series before adding four further victories on his way to winning the title. His Indy 500 debut saw him lead for 34 laps before ultimately finishing third.

Back then, the media centre at Indianapolis Motor Speedway had to be extended to cope with the 100 additional international journalists who wished to cover the event.

There have been almost double the requests this time.

"In the past week alone there have been 170 journalists from around the world arriving that were not here last year," adds Smith.

"Bear in mind that last year was the most-watched Indy 500 ever, so if you have over 170 more journalists here that will draw in more attention - and that is also because of Fernando.

"I would say it is similar, if not even a bit bigger, than when Mansell ran here in 1993. That brought huge attention.

"However, I think because it has been so long and IndyCar has had a lot of down years since then, I think having someone as polarising as Alonso here, who wants to give IndyCar the additional attention, means it has been welcomed even more."

There are, however, some who don't see Alonso's arrival in America as something worthy of a big fanfare.

"Put Lewis Hamilton in the Indy 500, with proper seat time and the freedom to Snapchat and Instagram his way through the entire process. That might appeal to kids," Associated Press journalist Jenna Fryer wrote.

"Or put Ricky or Jordan Taylor in the event. They are rising American stars in sports cars with the following to make a difference to the race and the series.

"Alonso? Meh. It's hard to see what IndyCar gains in the long run. After selling some tickets and drawing some eyeballs on race day, what happens when the race is over and Alonso returns to Formula 1?"

Whether it is seen as a positive or negative, Alonso's participation in the Indy 500 has undoubtedly had a huge impact in America and across the world.

If he goes on to win it on Sunday, that impact could become seismic. 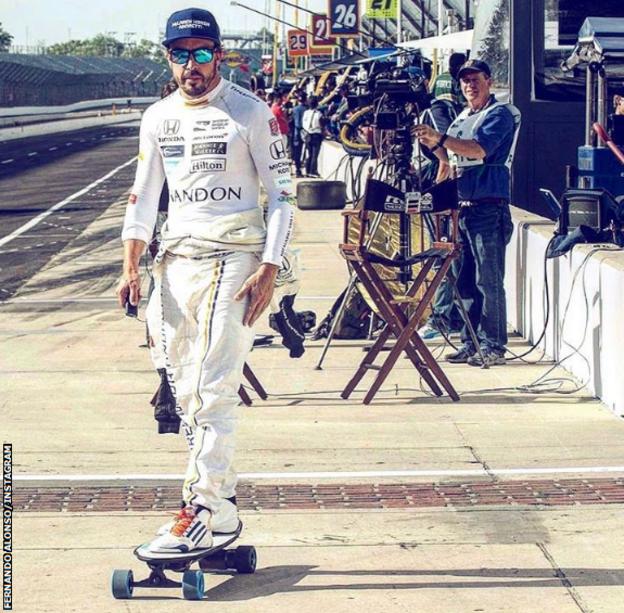