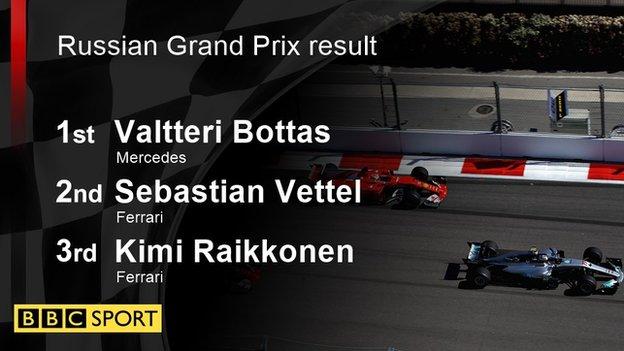 Bottas jumped Vettel and team-mate Kimi Raikkonen at the start from his third position on the grid and dominated until the closing stages, when Vettel used a late pit stop to close up and pressure the Finn.

The four-time champion got to within a second and a half of Bottas with 10 laps to go but the Finn responded and kept Vettel at arm's length for the rest of the race.

Bottas' team-mate Lewis Hamilton capped a difficult weekend with a race to forget and finished only fourth behind Raikkonen.

Hamilton slipped to 13 points behind Vettel in the championship, with Bottas now only 10 adrift of the British three-time champion.

But Hamilton had reason to be grateful for Bottas' accomplished performance - without it, Vettel's lead would be 20 points and edging towards a clear win.

The race confirmed Ferrari's position as a match for Mercedes and the see-saw nature of the close competition between the two teams in what promises to be a very tightly contested title fight.

Bottas' peach of a start

Ferrari took their first front-row lock-out for nine years on Saturday as Mercedes struggled to get the best out of the ultra-soft tyres on a single qualifying lap.

Much depended on the start in a race that was going to feature just a single pit stop for the frontrunners, and Bottas made a flier.

The Finn made a peach of a getaway, quickly drawing alongside Vettel on the outside on the long run down to the first chicane and out-braking the Ferrari around the outside.

From there, Bottas edged into the distance, building a five-second lead by lap 19.

Vettel brought the gap down to three seconds as Bottas negotiated traffic in the next eight laps before the Mercedes driver made his pit stop on lap 27, and Ferrari decided to use a different strategy to put Vettel back in the fight.

The German waited another seven laps before his stop on lap 34, the idea being to have fresher tyres on which he could push harder and hopefully pressure Bottas over the remaining 18 laps.

Vettel rejoined just under five seconds behind the Mercedes and immediately began to eat into the gap.

A mistake by Bottas on lap 38, running wide at Turn 13 and flat-spotting his right-front tyre, reduced the gap to 2.8secs.

With two laps to go, Vettel was less than a second behind and had the use of the DRS overtaking aid, but Bottas, negotiating traffic, also had use of the DRS on the main straight at the start of the last lap and had just enough pace to hold him off. 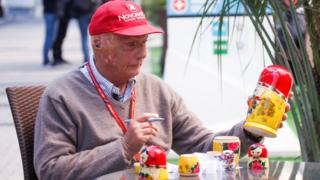 Gallery: Guys and dolls - what happened in Russia

Hamilton all at sea

While his team-mate took a well-deserved win in only his fourth race for Mercedes since replacing world champion Nico Rosberg, Hamilton was largely anonymous.

He, too, made a good start, but he had to back out of an attempt to sneak past Raikkonen at the first corner and stayed fourth on the first lap.

He was immediately in trouble with high temperatures in his car - a problem that was also afflicting Bottas, who was able to manage it better because he was not following another car.

Hamilton tracked Raikkonen within two or three seconds for most of the first stint but lost ground due to a later pit stop and trailed in more than 20 seconds behind the Ferrari.

A new low for McLaren

McLaren's troubled season hit a new nadir when Fernando Alonso retired on the formation lap with a lack of hybrid charge.

The two-time champion ground to a halt at the entry to the pits as he tried to get the car back to the garage.

Alonso has retired from all the races this season and said he was "sad", adding that the team needed to make progress fast with the Honda engine's recurring reliability problems.

The Spaniard is flying to the USA overnight to prepare for his first test at the Indianapolis Motor Speedway before his debut at the Indy 500 next month.

Alonso said: "Obviously frustrating - fourth race of the championship, four DNFs, this time we did not even make the start. That's sad but nothing we can do now.

"We come here, I drive as fast as I can, and hopefully the next one will be a little bit better."

Asked whether Honda's troubles were unacceptable, he said: "That is a question for the boss of the team and the McLaren Group. I am just a driver. I drive as fast as I can. I help the team but they have to look at the bigger picture."

Jolyon Palmer's race lasted only a few hundred metres as his Renault was involved in a crash with Haas' Romain Grosjean at the first corner.

Grosjean was trying to pass on the inside and was a significant way alongside but Palmer turned in anyway, saying he had no room to move outside because of another car.

Grosjean bounced over the kerb and the two collided, a second impact sending them both spinning into retirement.

Each blamed the other but the stewards decided to take no action, ruling neither was predominantly to blame.

Vettel has been saying for some time that starting the season well is one thing, but the key is to continue that way. That's a reference to the development race that will be even more intense than usual in the first season of a new set of regulations.

The Spanish Grand Prix on 12-14 May always marks the race where the teams bring their first big updates and this year will be no different. It's a track that provides a comprehensive test of a car's all-round capabilities and so closely matched are Mercedes and Ferrari that it is impossible to predict who will come out on top.

Valtteri Bottas, P1: "It's been quite a while, more than 80 races, but worth the wait, well worth the learning curve.

"This strange opportunity came to me over the winter and I have to thank the team for making this possible."

Sebastian Vettel, P2: "I tried everything to catch Valtteri. I thought there would be an opportunity on the back straight.

"I thought there was an opportunity but I was not sure what Felipe Massa would do and ended up losing out."

Kimi Raikkonen, third: "Unfortunately today we could only get third place but we'll try for better next time.

"I have had a little bit of a rough start to the season - far from ideal - but this week has been a step forward, but we still only finished third."