Lewis Hamilton says Mercedes will not impose team orders as a matter of course, but are aware they may be necessary in the title fight this year.

Team-mate Valtteri Bottas was ordered to move aside so Hamilton could attack eventual winner Sebastian Vettel of Ferrari in the last race in Bahrain.

But Hamilton said ahead of Sunday's Russian Grand Prix: "Our approach is, the team need to win.

"So we have to try to work as a team but only in special circumstances."

Hamilton said he had "never particularly liked" team orders but that the Mercedes drivers were clear about what their responsibilities were during a race.

"We have to make sure we maximise the points for the team through the weekend," Hamilton said. "And our notes in our job description is to win for the team not for yourself.

"If you can't win, it is not the case of not wanting the other car to win. You want the team to win and succeed.

"Mercedes, we want to finish ahead of Ferrari this year and to do that we have work as a team more than ever before."

Hamilton heads into the race at the Olympic Park in Sochi seven points behind Vettel in the championship and 23 - almost a clear win - ahead of Bottas.

But he insisted he would have moved over for Bottas had the roles been reversed in Bahrain.

"I would have reacted the same way as him," Hamilton said.

"He was struggling - he has admitted he was struggling with his rear tyres and when I passed I said to the team: 'If I don't pull away I'll let him back past.' But I did [pull away].

"So I could see Sebastian pulling away and I was like: 'We have to together pick up the pace.' And at the time Valtteri was struggling with the car balance so it made no sense for us both to fall behind and just let them pull away.

"So in that scenario we worked as a team and while it was very tough for him he was great gentleman about it and did the team proud." 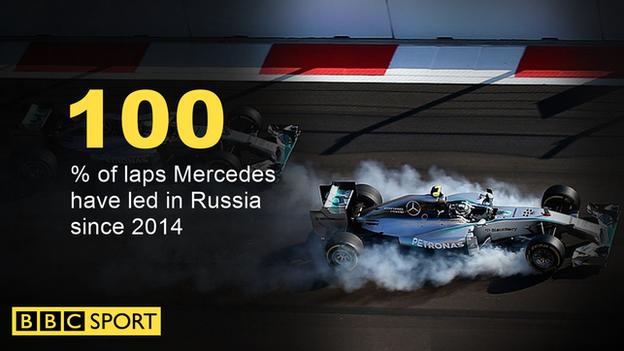 What is Vettel's view?

Vettel was also asked about the prospect of Ferrari introducing team orders, given he is already 34 points ahead of team-mate Kimi Raikkonen.

The four-time champion said: "The way we have raced the last two and a half years has been straightforward. It has been close, sometimes too close. You try to fight your team-mate as well as all the others. But more than anything we know and understand we are racing for Ferrari."

He said he expected Mercedes, who are the only team to lead a lap in any of the three races held so far in Russia, to be tough to beat in Sochi.

"On paper it is a very strong circuit for Mercedes, not just historically, a lot straights, power-sensitive circuit," Vettel said. "We'll see. There is also a lot of corners, where last year the car was already pretty good. If we can be very close to them or even beat them, it would be good.

"We are very happy with the races we had, especially the pace, which has been a match for Mercedes in the races. But this year you need to focus on every single step to stay in the hunt as the cars will evolve through the season. That's where our focus is at the moment."

No discussion over driver rank - Bottas

Bottas said Mercedes had not discussed whether there would come a point where the team had to designate a number one and number two driver in the interests of the title battle.

"We have not had the conversation because there is no need to," said the Finn, who joined Mercedes this season as a replacement for world champion Nico Rosberg, who retired at the end of last season.

"This team has never had number one or two and it is not planning to. It is always trying to give equal chance [to both drivers].

"But what is different is that the gap to the second team in the last few years has been bigger so letting the drivers race has not cost anything.

"I do understand this year it can cost points and if for any reason the pace of the other car is not good, the team has to be clever to not lose points.

"We have only had three races and I feel all my good races are on the way. I am not thinking of anything like that and I am sure the team think there is no need to."

Hamilton, who has won one race to Vettel's two so far this season, said he was optimistic Mercedes could beat Ferrari in Russia.

"If we win, it will be earned, and we are here to earn it," he said. "There are lots of things we are trying to do to combat the strength of the Ferrari and I think we can.

"This is a different track, different tyre wear and we will just have to drive the socks off the car.

"We have to be operating on all cylinders every race because one small drop in percentage and the Ferrari is ahead."