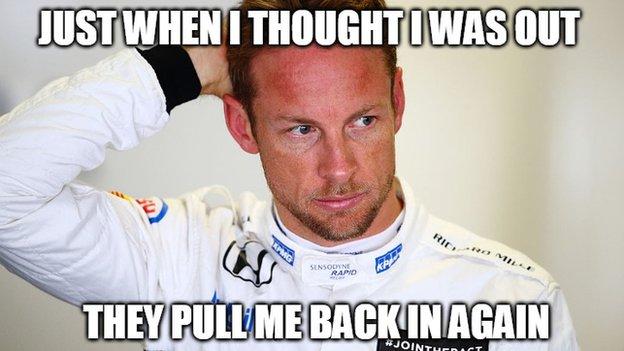 He just can't keep away.

Yes, despite having decided to give Formula 1 a miss this year, Jenson Button will be back behind the wheel of the McLaren for next month's Monaco Grand Prix as Fernando Alonso goes off for a crack at the Indy 500.

BBC Sport takes a trip down memory lane to see how some other cameos in Formula 1 turned out.

Jean-Louis Schlesser deputised for Nigel Mansell at the 1988 Italian Grand Prix... and promptly crashed his Williams into Ayrton Senna - who was right in the middle of one of the most dominant title wins in the sport's history.

Strangely, that appearance at Monza was Schlesser's one and only start in Formula 1.

"I think he can become world champion," McLaren boss Ron Dennis said of Michael Andretti - son of F1 legend and 1978 champion, Mario - when he signed him up in 1993.

He failed to finish any of the first four races he started before leaving McLaren with three remaining.

The Italian stepped in for Felipe Massa as the Brazilian recovered from his crash in Hungary... and had a shocker.

He qualified last at Valencia and Spa, was way off the pace generally and Ferrari promptly replaced him with Giancarlo Fisichella before the Italian Grand Prix.

1991. The year Michael Schumacher arrived on the Formula 1 scene.

The then 22-year-old got his big break with Jordan when Bertrand Gachot had been sent to prison following an altercation with a taxi driver and Schumacher grasped his opportunity with both hands.

He qualified eighth in his one and only race for Jordan - the 1991 Belgian Grand Prix - with the big names of Ayrton Senna, Riccardo Patrese, Alain Prost, Nigel Mansell, Gerhard Berger, Jean Alesi and Nelson Piquet ahead of him.

A gearbox failure ended his race early but Schumacher's performance in qualifying had done enough to get fans and F1 personnel alike excited about the young German.

Schumacher was subsequently snapped up by Benetton and so began the career of a racing legend.

A star was born.

Gilles Villeneuve's Formula 1 career started when he impressed James Hunt at a non-championship Formula Atlantic event in 1976. Hunt went back to his McLaren team, urging them to give this exciting Canadian a shot, which they did.

Villeneuve was offered a drive for the British Grand Prix the following year and made the most of it, qualifying ninth and running on the pace of the leaders in an older car.

He went on to finish 11th, with some British newspapers lauding his debut performance as that of a future world champion. McLaren, though, decided not to take up an option on Villeneuve and he instead signed for Ferrari to replace Niki Lauda.

Winkelhock leads... in a Spyker

The amazing sight of a Spyker leading a grand prix occurred at the 2007 European Grand Prix. Winkelhock was called in to drive in the 10th race of the season following Christijan Albers' departure and started last on the grid.

Winkelhock started the race on intermediates while the rest of the field were on dry-weather tyres and, when a heavy downpour forced everyone else to pit at the end of the first lap, Winkelhock moved into the lead.

At one point, the German led by 33 seconds, but as the rain got heavier the safety car was sent out before the race was suspended until the rain eased. When it resumed, Spyker gambled on further rain by keeping Winkelhock on full wet tyres. It did not pay off as Winkelhock dropped down the order before retiring on lap 15 with a hydraulic issue.