Lewis Hamilton won a tight battle for pole position between Mercedes and Ferrari at the season-opening Australian Grand Prix.

The German pipped Hamilton's team-mate Valtteri Bottas by just 0.025secs as the new era of faster, more demanding cars got off to a promising start.

A real battle in store

The tightness of the battle in qualifying between Mercedes and Ferrari is what was expected after pre-season testing but an impressive performance by Mercedes on Friday led to fears the world champions may dominate again.

But Ferrari were in much better shape on Saturday and gave every sign they will be able to push Mercedes hard this season, as testing had promised.

Vettel was fastest in final practice and the red cars were in the mix from the start of qualifying.

A slightly scruffy final lap from Bottas might have stopped him joining his team-mate on the front row but even so the margins were slight and a fair bit of Hamilton's advantage may well have been in the driver on a circuit on which the three-time champion has always excelled.

Bottas, though, was impressive in his debut for Mercedes, qualifying closer to Hamilton than his former team-mate Nico Rosberg did at this race last year.

In truth, pole position always looked like it was Hamilton's to lose from the moment he took to the track in Friday's first practice.

Seemingly intent on laying down a marker for Bottas, Hamilton was flying from the start, the car dancing through the tricky chicanes around the demanding Albert Park track.

He ended the day half a second clear of the field, with Bottas and Vettel again separated by tiny fractions, and although Hamilton's margin was reduced in qualifying, the fundamental pattern remained. 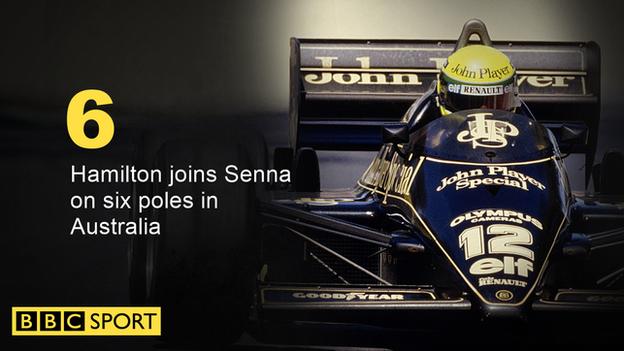 The 32-year-old still has much to do, however. There are new rules governing starts this year which have put control much more back in the drivers' hands and have therefore increased the possibility of errors.

And it will be a demanding race in pretty much the fastest cars ever raced in F1, following rule changes over the winter, and on tyres on which the drivers can push flat out for the entire race for pretty much the first time in six years.

Hamilton said: "It has been a fantastic weekend so far and it is quite amazing to be here for the 11th time. It feels like it was only yesterday I came and had my first race here in 2007.

"Such a great journey, and I am incredibly proud of my team. This rule change has been huge, a massive challenge for everyone and to be up here is fantastic.

"Valtteri did a great job in his first qualifying session for the team. It is close between us all and it is going to be a tight race this year, I think."

Vettel added: "I think we have a good car, things are working well as a team, things are improving. We had a mixed day yesterday but the confidence in the car was there from testing.

"I was not entirely happy with my lap but I think Lewis did a very good lap and I don't think pole was up for grabs but we can do something in the race."

Outside the big three teams, Romain Grosjean put in a highly impressive performance to be sixth in the Haas.

McLaren and engine partner Honda salvaged something in the context of a dire, reliability-hit testing programme to qualify a respectable 13th with Fernando Alonso.

There was a highly impressive performance by Sauber's Antonio Giovinazzi, who was drafted in at the last minute in the morning after regular driver Pascal Wehrlein pulled out citing a lack of fitness.

Giovinazzi, who stood in for Wehrlein in the first pre-season test as the German recovered from a back injury sustained in the winter, was quicker than team-mate Marcus Ericsson after the first runs and was less than 0.2secs adrift in the end, despite aborting his final lap because of a mistake at the penultimate corner.

Giovinazzi, who is Ferrari's third driver, said: "I am so happy. It is a dream come true for me."

Briton Jolyon Palmer had a torrid time, qualifying last after a weekend disrupted by problems, 3.3 seconds behind team-mate Nico Hulkenberg in first qualifying.

He said: "Horrendous. I am a second off what I did on my second lap of the weekend, and that was on a soft tyre with traffic. The pace right now is a disaster."

529 comments
Back to top
unknown