Ferrari impressed for the second day running at the first pre-season test in Barcelona, Spain.

Mercedes driver Valtteri Bottas set the pace with the fastest time of the week, but Ferrari's Sebastian Vettel was only 0.247 seconds behind on a slower tyre.

Bottas' time was set on the fastest ultra-soft tyre, Vettel's on the soft, which is two grades more durable.

Vettel's performance came after team-mate Kimi Raikkonen set the pace on Tuesday, again using a harder tyre than the one Mercedes driver Lewis Hamilton used to be second fastest.

It is notoriously difficult to form an accurate indication of form from pre-season testing times, as it is impossible to know the specification each car is running in.

Factors such as fuel load, engine mode, track conditions, time of day, car set-up and a myriad other variables all affect a car's performance.

The car stopped on the straight with a few minutes of the day's running remaining.

Four-time world champion Vettel said: "Car feels better than last year but I think everyone is saying that.

"It is quite a bit faster due to the new regulations. Different car to drive, different tyres. It is a good combination.

"Everybody [at Ferrari] is pushing like crazy. We have had a good three days, did a decent amount of laps. We have a lot of stuff we know we need to improve.

"I didn't really pay much attention to what the others are doing. It is very difficult to read."

Ricciardo was 1.2secs behind Vettel, but Red Bull are known to be running their Renault engine in a detuned mode and to have a number of new aerodynamic parts scheduled to appear next week.

But Mercedes continued to run reliably and quickly and undoubtedly have more performance to come.

Hamilton took over the car in the afternoon and concentrated on a race run, ending the day with eighth quickest time.

Williams novice Lance Stroll continued his difficult start to his Formula 1 career with two off-track moments in one day to add to the crash he had on Tuesday.

The second, in which the 18-year-old Canadian hit the wall at Turn Six, ended the team's running for the day with 90 minutes still to go.

It was the second time in less than two days he had damaged the car and raises questions about how much running Williams will be able to do on the final day of the test on Thursday.

The team had to fly out a second front wing overnight for Stroll after he damaged the first on Tuesday and are likely to be facing a parts shortage. 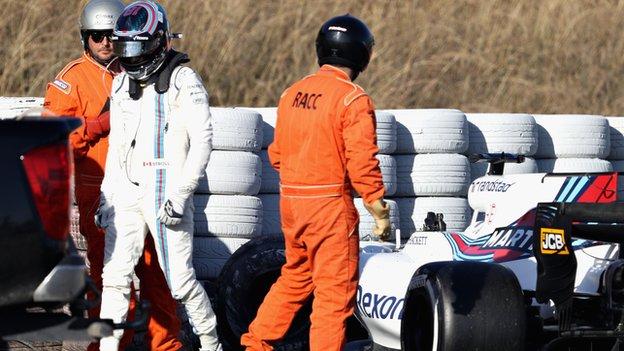 It was a better day for McLaren in terms of reliability, with Fernando Alonso at least able to do some fairly consistent running after the team's first two days were hit by major reliability problems with the Honda engine.

But while the car was able to run and McLaren gain experience, it was painfully slow for a team with aspirations of winning races.

At this stage, McLaren appear as if they might be the slowest team of all.

Racing director Eric Boullier said: "We had many issues. I think none is obviously fundamental. All of them are fixable. I am not sure we know all of them yet.

"Today, finally, we can run, so have some other glitches, the usual ones you get on day one. But we have them on day three."

Honda F1 chief Yusuke Hasegawa said: "Obviously we are not happy to have trouble, but this is a test - and we are feeling sorry for both drivers," he said. "So, we need to find out what has happened in the day two engine especially."

all others set on medium tyres