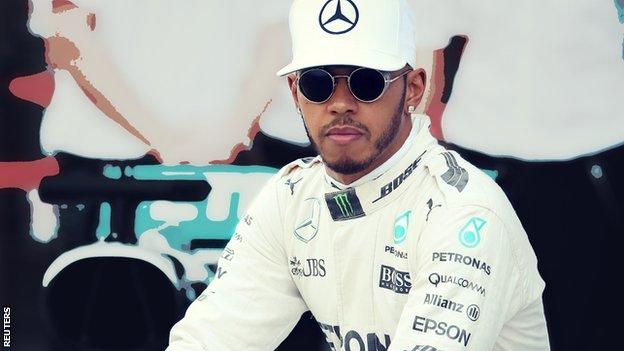 Lewis Hamilton was never going to go down without a fight in his world title duel with Nico Rosberg.

He had two choices going into the Abu Dhabi Grand Prix: drive off into the distance and emphasise a point about being the fastest driver in the world, who had only lost the title because of an uneven spread of reliability problems at Mercedes; or try to engineer the result.

He is a fighter, a racer and a man who has an unshakeable belief in his own position as the fastest driver in the world - and certainly faster than Rosberg.

So he chose the second option.

Few, not even Rosberg, would dispute the scale of Hamilton's talent. And Hamilton certainly wasted no opportunity to remind people of it over the weekend in Abu Dhabi - or indeed over the season as a whole.

But whether you agree with Hamilton's decision to drive deliberately slowly to back Rosberg into his rivals, in an attempt to make him finish lower than the third place that would clinch him the title, comes down to personal opinion.

Ferrari's Sebastian Vettel, who found himself on the tail of the Mercedes drivers going into the final lap, called it "dirty tricks".

Some - including senior figures at Mercedes - would argue that driving his own race and winning by a mile would have been the classy decision, one from which Hamilton would have emerged with the most honour.

But class and honour are luxuries in one of the most brutal sporting environments in the world - so Hamilton took a decision befitting both his character and F1 as a whole.

He has fought all his life, and the World Championship means more to him than anything else - as he explained in direct terms over the radio to the team whose orders to speed up he was disobeying during the race.

Having decided what to do, Hamilton performed his task with exquisite judgement, lapping seconds slower than he could but never letting Rosberg close enough to challenge him.

Rosberg said he had been "naive" not to expect the tactics but said he "understood it" and that it did not need to be discussed further.

Mercedes F1 boss Toto Wolff was less impressed, and would have preferred Hamilton to take the run-and-hide option, but carefully underlined how he could see both sides of the argument.

Will he impose some form of punishment? He wouldn't say. But he did admit that "everything is possible".

Agree or not, it meant Hamilton in defeat was at least as big a story as Rosberg in triumph. Which for an inveterate attention seeker might have been part of the plan.

And it ensured the final race of the season, which could have been a tedious drone to another Mercedes one-two finish, was fraught with tension and drama.

For that, at least, Hamilton can be applauded.

The season of Rosberg's life

Rosberg clinched his first Formula 1 world championship in the same way he got himself in the position to do it - by doing exactly what he needed to do at the time.

The German has been a closed-off character this year - so much so, in fact, that he apologised to the media afterwards for it - but he has finally found a method, as well a set of circumstances, that has enabled him to take on Hamilton and beat him.

More than anything, this season has demonstrated Rosberg's iron will, solidity, resilience and determination

The two go way back, to their childhoods starting out on their careers in go-karts. And this is the first time Rosberg has ended the season on top.

"It feels like I have been racing him forever and always he has just managed to edge me out," Rosberg said.

"He is just an amazing driver and one of the best in history so it is unbelievable to beat him because the level is so high and that makes it so much more satisfying that I took the world championship away from him."

So how did Rosberg do it?

That fact that Hamilton was badly affected by reliability cannot be avoided when seeking the answer.

Even Wolff said that the engine failure Hamilton suffered while leading in Malaysia in late September "cost him the championship".

Rosberg came away from that race with a 23-point lead in the championship. Had Hamilton's engine held together, he would have been leading by five. It was a 28-point swing in a championship that Hamilton lost by five points.

But at the same time there is no doubt that Rosberg delivered the best season of his career.

He is still not - and never will be - Hamilton's equal as a racing driver.

Hamilton took 12 poles, Rosberg eight, despite the fact that the Briton did not even compete in three qualifying sessions because of other engine problems and their knock-on effects. Hamilton won 10 races and Rosberg nine. The average qualifying gap between them was 0.14 seconds in Hamilton's favour.

The popular impression is that Rosberg has been closer to Hamilton this year than ever before, but that is not quite true.

In races in which they have been able to directly compete, Hamilton has come out on top 11 times and Rosberg six - about the same ratio as their previous two seasons.

But what Rosberg has done this year better than ever before is maximise his own potential.

He has not quite had a perfect season - by which one means a season whereby he has done the best he could do. But within the context of his ability, it has not been far off.

Rosberg was arguably more to blame for the first-lap collision that took both drivers out in Spain.

It was unwise to try to sit it out on the outside of Hamilton at the first corner in Canada - he should have expected to be run wide and lose places, given previous similar situations.

And his defence of the lead from Hamilton after a mistake on the last lap in Austria was just on the wrong side of acceptable and led to the collision that dropped him down to fourth place.

But by and large the mantra he has adopted all season - that he is only focusing on the race at hand - has served him well.

For a start, he has raced better, with more cleanliness, aggression and decisiveness than ever before - and the title-deciding race in Abu Dhabi provided just the most recent example of that.

Sitting behind Max Verstappen's Red Bull in the first half of the race, he was told that the situation was "critical" and he needed to pass. Within a lap, he was through, despite a very robust defence from the Dutchman, and back in second place behind Hamilton.

It was the same in Malaysia, when he was behind Kimi Raikkonen's Ferrari and made a daring but ultimately successful attempt to pass, in which the two banged wheels. And also in his recovery drives after bad starts in Hungary and Germany, in which he was much more effective than they had been in similar situations in previous seasons.

And, on a wider scale, he has allowed himself to be less affected by Hamilton and other outside influences than ever before. Hence the post-race apology to the media.

"Apologies if I have not been completely transparent all weekend," he said in the official news conference. "I hope you understand I have to protect myself from your world, which can be a little intense.

"I know I am changing a little bit what I said before the weekend but please respect that you are a powerful entity and I needed to do my team and think about myself. I am sure you will understand that."

How did Rosberg handle it?

How has he done this? Not by accident, that's for certain. It is a conscious plan.

The improvement in his racing came after some deep thinking about how to approach on-track battles over the winter, following an acceptance that it was a weakness.

The Zen-like focus on the moment emerged during his run of four straight victories at the start of the season, after two bad starts for Hamilton and then two engine problems.

"It became very clear that it would be completely wrong to now start thinking about the championship because it is Lewis Hamilton who is my team-mate, he is always going to fight back," Rosberg said. "He is always going to be massively tough to beat.

"I push in all directions and of course the head is an important part of sport and it just seemed the best way because if you think too much about the big picture it will just make you nervous.

"With so much at stake, the desire to be world champion and all that, that can weigh on your shoulders so it really worked well for me to keep it simple and stay right in the moment and not go into all these desires.

"The desire to be world champion - holy moly, that is gigantic - so better to stay away from all that and stay in the moment and it has been a big part of the success this year."

It stems from Rosberg's character - he is an introvert and Hamilton an extrovert. This carries over into their actions as racing drivers, in which Hamilton is intuitive and extemporaneous, Rosberg more controlled and deliberate.

More than anything, this season has demonstrated Rosberg's iron will, solidity, resilience and determination.

One can only imagine how difficult it must be to have as a team-mate the man most would regard as the fastest and most naturally talented driver of his generation, to be beaten over and over again, but somehow find a way to keep coming back, keep trying, not give up and accept you are second best.

It has taken him a while, and he has had a fair bit of external help - not just from Hamilton's reliability problems, but also from the Englishman's weak races in Baku and Singapore, which are just the latest example of his tendency to swing from the sublime to the occasionally inexplicably dreadful.

"You need to win and lose with dignity and this is a mechanical sport," Wolff said. "This team has built them the best car over the last three years and made them win races and championships and the team has let them down on a number of occasions - less let them down than making them celebrate.

"On the other side, we have been spending the last 10 minutes discussing about Lewis without recognising Nico's achievement.

"Racing against the most talented driver as a team-mate and winning a world championship and making it close before is quite an achievement and I think we should honour that because he is a tough cookie and he doesn't let go.