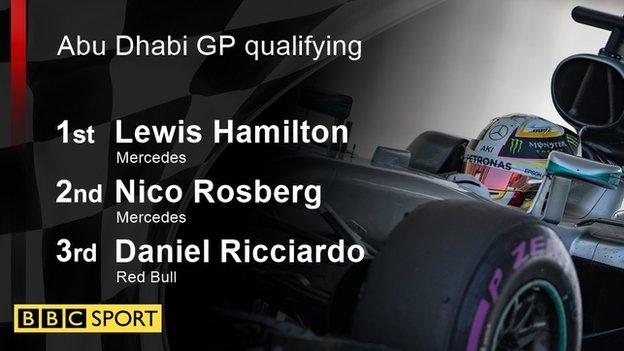 Lewis Hamilton took a stunning pole position for the decisive Abu Dhabi Grand Prix but Nico Rosberg remains on course for the title.

The German, who needs only to finish in the top three on Sunday to win the world championship, qualified second fastest, 0.303 seconds behind Hamilton.

Hamilton needs two other cars between himself and Rosberg on Sunday, but Mercedes' rivals were off their pace.

Sunday's race is live on the BBC Sport website and radio 5 live. 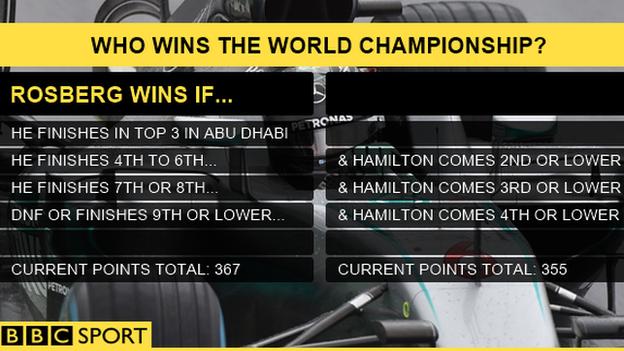 Hamilton imperious in qualifying - most of the season

Hamilton's performance was one of the most impressive of a season in which he has now taken 12 poles to Rosberg's eight despite not even being able to compete in qualifying in three races because of reliability problems.

Hamilton topped all three sessions of qualifying - and was 1.024secs quicker than Rosberg in Q1, 0.108secs in Q2 and then the final margin of nearly a third of a second.

It was the 61st pole of his career, four behind his hero Ayrton Senna and seven behind all-time record holder Michael Schumacher.

Hamilton said: "Wow, 61 poles. I am going to try to catch Ayrton. It has been a strange feeling coming here and realising it was going to be the last session, the last qualifying in such a great car - you never know when you are going to have a car like this again.

"We got the car in a great sweet spot and I want to thank everyone - I would not have the 61 poles if it was not for them. The perfect position for tomorrow."

Rosberg said: "I had a good balance and was feeling quite pleased. I got a good lap in the end but it was not good enough. I gave it everything but it wasn't possible to beat Lewis today. But I will give it everything tomorrow."

Red Bull have thrown a curve ball ahead of the race by choosing to start on the super-soft tyres rather than the faster but less durable ultra-softs, used by the rest of the top 10.

The plan will be to try to mix things up and get in amongst the Mercedes, and this could play a role in strategy in the race.

Ricciardo said: "We have to try something. It seems to be in a bit of a trend, if we are in a position to qualify on a different tyres we will try and see if it gives us a good opportunity. We will see if it puts us in the fight."

The team showed strong pace in the long runs on Friday practice - at least as good as the Mercedes.

"We were strong on the long runs and it looks good," Ricciardo said. "I think it is going to be fun. There will be a fight between these guys and hopefully we can do something to make it even more exciting than it already is."

Button prepares to bow out

Jenson Button will start the final race of his Formula 1 career 12th.

He was 0.228 seconds slower in second qualifying than team-mate Fernando Alonso - in the region of the typical gap between the two.

Alonso ultimately qualified ninth, behind the Force Indias of Nico Hulkenberg and Sergio Perez and ahead of Williams' Felipe Massa, who like Button is retiring after this race.

Button said: "Fernando did a good job but I think we did too. We start just outside the top 10. With that, we can start with new tyres and tyre a different strategy, which could be good. I'm looking forward to the race."