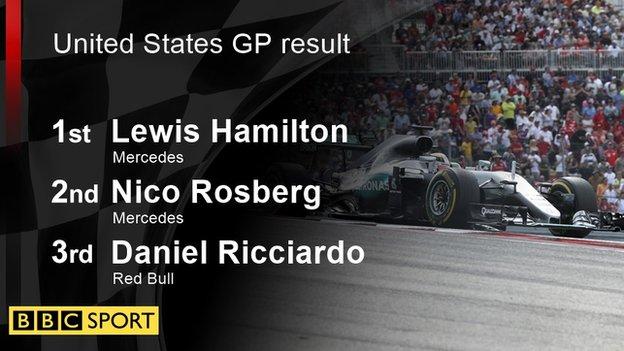 Lewis Hamilton cut his championship points deficit to Nico Rosberg as he cruised to a comfortable victory in the United States Grand Prix.

Hamilton's first win since the German Grand Prix in July puts him 26 points behind his Mercedes team-mate with 75 available in the remaining three races.

Rosberg finished second after recovering a position lost to Red Bull's Daniel Ricciardo at the start.

The Australian finished third ahead of Ferrari's Sebastian Vettel.

The world champion has now won 50 races in his career, with only Alain Prost (51) and Michael Schumacher (91) having won more than that number in the history of the sport.

Hamilton still has work to do

Hamilton's long-awaited and much-needed victory halts the momentum Rosberg had built up since the summer break, since which the German has taken four victories in five races.

But the Englishman is still up against it - the mathematics of the championship situation are that Rosberg is still able to tie up the title by finishing second to Hamilton in the final three races - Mexico next weekend, and then Brazil and Abu Dhabi.

But Hamilton can only do what is within his control, and he grabbed this weekend by the scruff of the neck from first practice and never let go.

An excellent pole position was followed by a solid start, a lead into the first corner and a dominant victory, in which he lost the lead only through the first pit-stop period.

"All I can do is do my best," said Hamilton. "Nico has been driving fantastically well all season but I will keep going."

Rosberg also made a decent start, but his focus on Hamilton into the first corner gave Ricciardo the chance to challenge the Mercedes driver and the Red Bull took second around the outside of the fast kink of Turn Two.

Ricciardo held a de facto second through the first pit stop period, and then made an early final pit stop for medium tyres on lap 25 of 56.

He would have hoped to get second place back from Rosberg when the German made his second and final pit stops a few laps later.

But then Ricciardo's team-mate Max Verstappen suffered a gearbox failure.

That brought out the virtual safety car for more than a lap as the marshals recovered the Red Bull and that gave the Mercedes team a chance to get a "free" pit stop for both cars, and allowed Rosberg to retain second place.

Ricciardo expressed his frustration in swear words over the radio but realised there was nothing he could do.

Verstappen calls in, but no-one's home

Verstappen had been running fourth until he made a pit stop by mistake on lap 26, thinking in error that the team had called him in. The mechanics were not ready for him and he was delayed by some time as they scrambled to service the car.

It dropped the Dutchman to sixth but it became academic when the gearbox failed three laps later.

Gun control - or lack of

Ferrari's Kimi Raikkonen was on course to take fifth behind Vettel, but the team's decision to put him on a three-stop strategy with a third stint on super-soft tyres ultimately led to his demise.

As he left the pits for the final time, the team told him to stop because a wheel was not attached properly as a result of a cross-thread wheel nut, which would have led to disqualification.

Ferrari were fined £4,500 for an unsafe release.

Behind the big three teams, there was an epic battle for fifth place in the closing laps between Toro Rosso's Carlos Sainz, Williams' Felipe Massa and Fernando Alonso's McLaren.

Sainz was nursing fading tyres and held off pressure from Massa and Alonso for a number of laps.

Massa made no attempt to attack the Toro Rosso but things changed when Alonso grabbed sixth place from Massa with an opportunistic move at Turn 15 with four laps to go after the Brazilian locked a wheel.

The two did touch during the move, however, Massa getting a slow puncture but holding on to seventh place. The incident was investigated after the race by stewards, but no further action was taken.

Alonso then set out after Sainz and closed the two-second gap within a little over a lap and was on to his compatriot and friend's tail with a lap and a half to go. A move into the first corner was defended by Sainz but Alonso then dived for the inside into Turn 12 and took the place.

Alonso ran wide on the exit but Sainz was unable to take advantage and fifth place was his. "Yee-hah," Alonso cried over the radio in delight.

His team-mate Jenson Button made a strong start to run 11th on the first lap from 19th on the grid, but he was well off the Spaniard's pace - regularly lapping well over half a second slower - and finished ninth behind Force India's Sergio Perez.