Nico Hulkenberg is to join Renault next season after agreeing a release from his contract with Force India.

The German, 29, has been chosen to lead Renault's team as they build up to competitiveness following their return to F1 as a factory entry this year.

Hulkenberg said he was "very happy" to be joining the team, adding that it had "always been a dream" to work for a manufacturer team.

Hulkenberg added: "Renault has always been a big player in the motorsport world that brings up incredible memories.

"In his stint with Renault, [seven-time world champion] Michael Schumacher not only helped make Germany an F1 nation, he also sparked my enthusiasm and fire for racing."

"As a part of the Renault family, I want to develop the car and write new success stories."

Jerome Stoll, Renault Sport Racing chairman, said the team had recruited "an experienced driver who is still hungry for podiums".

The second seat at Renault remains open, with current drivers Kevin Magnussen and Jolyon Palmer in the frame, along with Manor's Esteban Ocon and Pascal Wehrlein.

Renault are also interested in Williams driver Valtteri Bottas, who is in salary negotiations with his current team.

Force India, for whom Hulkenberg has driven for five years across two spells, said they respect his desire to "explore fresh opportunities" with team boss Vijay Mallya adding: "It would be wrong to stand in his way."

The team also now have a seat to fill alongside Mexican Sergio Perez, with Palmer, Ocon and Wehrlein all contenders.

Hulkenberg - who made his debut for Williams in 2010 and drove for Sauber in 2013 - has taken a gamble because he believes in Renault's ability to become a major force in the next few years.

The French team are struggling this year, following the manufacturer's late takeover of the Lotus team at the end of 2015.

In contrast, Force India are on course for a fourth-place finish in the constructors' championship this season, their best since 1999 in their former guise of Jordan.

Renault have set a target of contending for the world title within the next five years, something a small, independent team such as Force India cannot realistically manage.

Hulkenberg himself effectively signposted his move to Renault earlier on Friday when he posted a picture of the front page of German newspaper Bild, which led on the story, on social media. 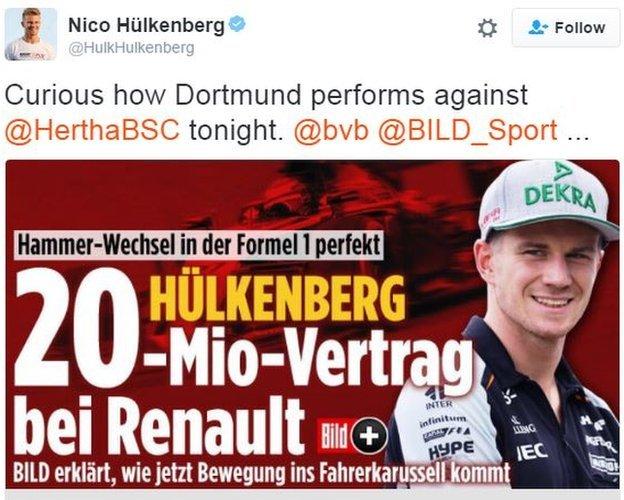