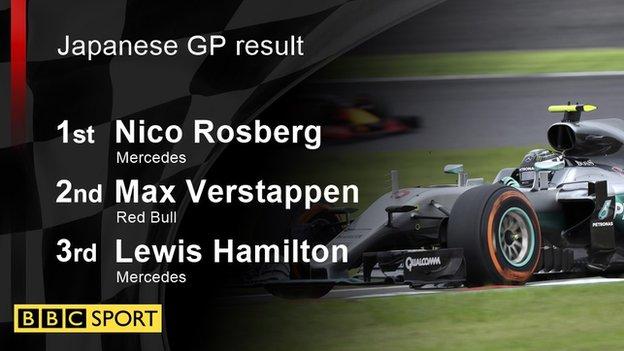 Lewis Hamilton's title hopes suffered a second blow in a week as he finished third in the Japanese Grand Prix, won by team-mate Nico Rosberg.

The Briton made a poor start and initially dropped to eighth in Suzuka, which comes after an engine failure cost him in Malaysia last weekend.

Hamilton is now 33 points behind the German with only 100 still available in the remaining four races.

The result means Mercedes have won the constructors' championship again.

Hamilton did recover with aggressive driving and strategy but Rosberg was serene throughout.

Rosberg's ninth victory of the season means he can now afford to finish second behind Hamilton in all the remaining races and still win the championship.

The win Hamilton badly needed after the blow of Malaysia was always going to be difficult after he was beaten to pole by Rosberg by just 0.013 seconds, and it was made impossible within a second or two of the start.

Hamilton's side of the grid was damper than Rosberg's after overnight rain. The world champion said that had nothing to do with his terrible start - "I just made a mistake," Hamilton said. Team boss Toto Wolff said: "Our first assessment is it didn't function well on the clutch release."

He was swamped by those behind him and down to eighth by the first corner.

Hamilton passed Force India's Nico Hulkenberg on the outside into Turn One on lap seven but otherwise drove a controlled first stint, running slightly longer - to lap 13 - than those in front of him.

It was an inspired move by Mercedes' strategists, as Hamilton jumped Kimi Raikkonen's Ferrari and Force India's Sergio Perez and then passed Daniel Ricciardo's Red Bull down the straight towards the flat-out 130R corner further around the lap.

That put him into a de facto fourth behind Rosberg, Red Bull's Max Verstappen and Ferrari's Sebastian Vettel, and the Williams cars that had not yet stopped.

Hamilton then quickly passed Felipe Massa and Valtteri Bottas to move into an actual fourth place and set his sights on Vettel.

Hamilton closed from nearly 14 seconds behind the Ferrari on lap 15 to 4.2 on lap 32, and then stopped on the next lap.

Vettel followed him in a lap later and came out behind, but on the faster soft tyres rather than the hard ones that Hamilton was using.

The German quickly closed in on his first two laps out of the pits but Hamilton soon began to edge away, and began instead to close on Verstappen's second place.

Hamilton caught Verstappen with nine laps to go but, despite the Mercedes being a faster car on tyres fresher by five laps, the Dutchman controlled his position superbly and Hamilton could not pass.

Hamilton made a last-ditch attempt on the penultimate lap on the outside line at the chicane but went straight on, complaining over the radio that Verstappen had "moved under braking", which drivers have a gentlemen's agreement not to do, although it is not specifically outlawed.

Mercedes lodged a protest against Verstappen's move but later withdrew the complaint after Hamilton tweeted: "It is not what we do. We are champions, we move on. End of!"

Hamilton's recovery limited the damage to his title hopes, on a weekend when he found himself embroiled in controversy over his behaviour in two separate news conferences.

Insiders believed that Hamilton's decision not to take questions from the written media after qualifying, and say he was planning to limit his future attendances at such conferences, was influenced by the pressure of seeing Rosberg take pole and the title fight going badly.

But while Hamilton made headlines off the track, Rosberg was writing his on it, dominating the entire weekend - fastest in all practice sessions, beating Hamilton to pole position and cruising to a comfortable win as Hamilton's drama unfolded behind him.

Hamilton is relying on a bad race from Rosberg or a technical failure - which have disproportionately affected the Englishman this season at Mercedes - to have a chance.

Vettel drove strongly in the first stint after narrowly avoiding collecting Hamilton off the start to move up to third, but the frustration of losing ground to Hamilton led him to make some angry radio messages, particularly about back markers ignoring blue flags that warn them a faster car is behind and they should let it by.

Nevertheless, his drive was a timely riposte to team boss Maurizio Arrivabene, who had told Italian television that Vettel needed to "earn" a new contract at Ferrari beyond 2017 and said he needed to be less distracted by team business and focus more on driving.

His team-mate Kimi Raikkonen finished behind him, winning a battle with Red Bull's Daniel Ricciardo, well ahead of the two Force Indias and Williams.

It was a dire weekend for McLaren at engine partner Honda's home race, a poor qualifying with a surprisingly uncompetitive car leading to a difficult race towards the back for Fernando Alonso and Jenson Button, who finished 16th and 18th.

What they said on the podium

"What an awesome weekend," said Rosberg inevitably. "It's beautiful to win here and congratulations to my colleagues and team for clinching constructors' championship - let's celebrate hard."

Hamilton said: "Congratulations to the team, I'm very proud to be part of it. I did the best I could from where I was in the race. I will give it everything I have got [for the rest of the season] and we will see what happens."