Hamilton failed to get a lap time on his qualifying simulation run on soft tyres, finishing over a second adrift.

The surprise of the session was the Renaults of Jolyon Palmer and Kevin Magnussen in eighth and ninth.

Palmer and Magnussen set identical lap times but the Englishman was classified ahead as a result of doing the time first.

Hamilton has work to do

Hamilton appears to have a bit of work to do ahead of qualifying, with Rosberg also setting the pace on the medium tyres earlier on in a session in which conditions improved throughout after starting on a damp track.

Hamilton was actually faster than Rosberg in sector one on his final lap on the soft tyres but the lap went awry in the middle sector and he aborted it.

There is added uncertainty headed towards qualifying at 15:00 local time (07:00 BST), with rain predicted.

If it does rain, Red Bull - for whom Ricciardo was only 0.302secs adrift of Rosberg in the dry conditions at the end of final practice - could be a major threat for pole position.

Vettel's lap time in third was a timely reminder of his quality to team boss Maurizio Arrivabene, who appeared to criticised the four-time champion in an interview on Italian television on Friday evening, in which he said the German would have to "earn" a new contract at the team from 2018.

He struggled with the car balance on Friday and was 0.5secs off Raikkonen, who has matched him in recent races, but after a slow start to the final session pipped Verstappen by 0.053secs. 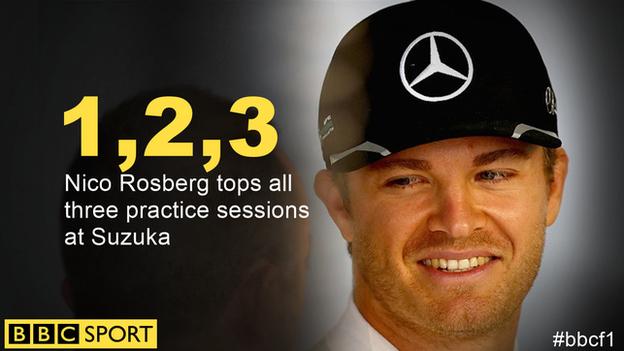 Raikkonen headed Williams' Felipe Massa, Hamilton and the Renaults, whose performance was a major surprise following a difficult season at the start of what is expected to be a lengthy rebuilding process for the French manufacturer after taking over the Lotus team last winter.

McLaren continued with the difficulties they were experiencing on Friday, when neither of their drivers were happy.

Fernando Alonso was a respectable 11th fastest - 1.622secs off the pace - but team-mate Jenson Button was all at sea, complaining of understeer and ending up 19th, a massive 0.834secs behind the Spaniard.