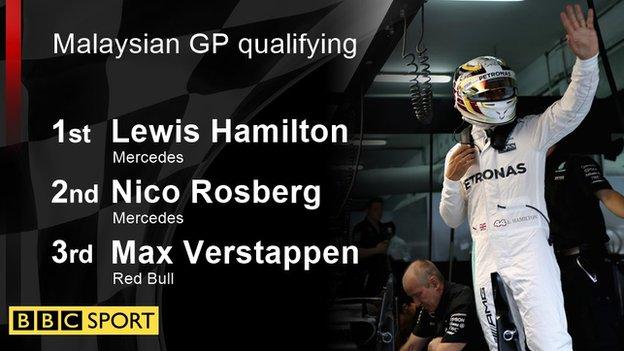 Lewis Hamilton put in a scintillating performance to take pole position for the Malaysian Grand Prix.

The world champion was 0.414 seconds quicker than Mercedes team-mate Nico Rosberg, with the Red Bulls of Max Verstappen and Daniel Ricciardo next.

Hamilton has a great chance to recover some of his eight-point title-race deficit to Rosberg in Sunday's race.

The Briton was dominant throughout, with Rosberg only fifth after the first runs in final qualifying and having to rely on a last-gasp lap to vault up to the front row.

Hamilton looked fast in final practice and took that form into the start of qualifying as he topped all three sessions.

He was nearly 0.6secs up on Rosberg in second qualifying and then a massive 0.911secs clear after the first runs in Q3, on which Rosberg had a snap oversteer and ran wide off the track through the fast Turn Six.

Hamilton lost the championship lead to Rosberg following the German's victory in Singapore two weeks ago but has been driving this weekend as if intent on recovering it in one go.

Rosberg has moved into that position after winning the past three races to overturn what had been a 19-point advantage for Hamilton after the German Grand Prix in July.

Hamilton said: "It's been a difficult few weeks with Nico's wins but today the car felt fantastic. I really enjoyed the lap - but could have been faster."

Rosberg said: "Lewis' lap was very quick so it was always going to be difficult. I would have come close but I had a mistake in the last corner. Something just wasn't going right there.

"But anyway, second place - I've got to live with that now and, as we know from this year, second does not mean victory is not possible."

That is a reference to the difficulty with starts both Mercedes drivers have had intermittently throughout this season.

Keep an eye on Red Bull for the race

Although Mercedes dominated qualifying, there is the possibility they will face a challenge for the victory from both Red Bull and Ferrari.

Verstappen, who out-qualified Ricciardo for only the third time in their 12 races as team-mates, was the fastest driver in the race-simulation runs in Friday practice, with Mercedes and Ferrari closely matched just behind.

Hamilton said: "The [newly resurfaced] track is generally better, a lot smoother and works better with the tyres. It will be a difficult race because they were looking strong on the long runs, but I think we will be pretty strong too."

Behind the top three teams, Force India's Sergio Perez was seventh as it emerged he has, after weeks of speculation, apparently completed the deal that will keep him at the team in 2017.

His team-mate Nico Hulkenberg was eighth, ahead of Jenson Button's McLaren and Felipe Massa's Williams.

Button's team-mate Fernando Alonso was last after deliberately doing only one lap good enough to get him within the 107% qualifying rule, as was the plan as a result of an engine penalty that meant he was going to be at the back of the grid.

Renault's Jolyon Palmer was disappointed to be 19th, 0.3secs slower than team-mate Kevin Magnussen as he was knocked out in Q1 and five places behind him on the grid.

Palmer: "It was crap, I drove terribly. I made a wrong choice on the set-up. Terrible."