Ayrton Senna at his best - winning the race and title with one of his greatest races after dropping to 14th on the opening lap in 1988.

And at his worst two years later - deliberately crashing into Alain Prost at 160mph to secure his second crown.

Michael Schumacher also had defining races on the Japanese circuit - so too did his rivals in various title fights, Damon Hill, Mika Hakkinen, Kimi Raikkonen and Fernando Alonso.

What they all achieved at this place is heightened by the context. These were not just great battles between great drivers; they were held on a great circuit, one that tested them to their limits and brought out the best in them.

A case can be made for either Suzuka or Spa as the greatest test of a driver's skills on the F1 calendar, which only goes to show how good the home of the Japanese Grand Prix is.

The celebrated circuit designer John Hugenholtz is responsible for a number of famous race tracks, but he excelled himself with this marvellous ribbon of asphalt - five hours south of Tokyo in the middle of the never-ending urban sprawl that characterises the eastern coastal strip of Japan's Honshu island.

It is a challenge from the beginning to the end of the lap.

From the 150mph first corner for which drivers have to brake while turning into the tricky, much slower second, before entering the magnificent S-bends - arguably the toughest section of race track on the planet.

These end with the fast, uphill Dunlop turn, before the ultra-tricky Degners - the first a quick, right-hand flick coming up faster than expected; the second is much tighter immediately afterwards. A crash here over the weekend is all but guaranteed.

The hairpin is made difficult by the right-hand flick that precedes it, where Daniil Kvyat misjudged his line last year in qualifying and rolled. 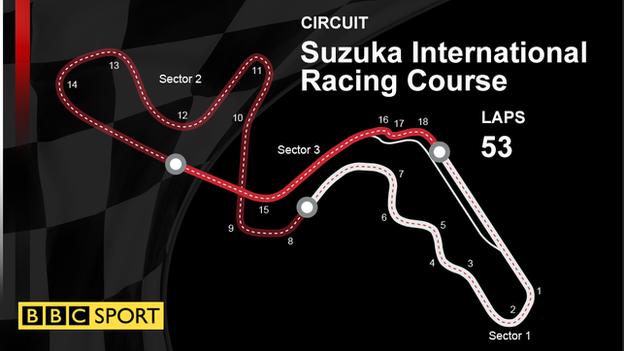 Then a long, curling "straight" down to Spoon, a fiendishly difficult double left, where the track falls away and it is all too easy to go off.

Another straight and then 130R - eased since Allan McNish had his monster accident there in qualifying in 2002, but still driven flat out at 200mph and able to catch out the unwary.

Even the looping right-hander that brings the cars back on to the pit straight after the chicane is harder than it looks - as Daniel Ricciardo found out when he crashed there in qualifying in 2014.

If you have a racing soul, you could watch Formula 1 cars at Suzuka all day - but the experience is about so much more than the track.

It is situated in a theme park and the fans are madly enthusiastic - they will pack the grandstands on the pit straight even on Thursday when there is no action to see, just cars visible in their garages and the occasional driver wandering about 100 metres or so away.

And then there is Japan itself - its marvellous other-worldliness always fascinating, always surprising.

Drivers soak it up