Ayrton Senna, Michael Schumacher and, more recently, Lewis Hamilton have laid claim to the unofficial title of Formula 1's rain master through superb mastery of wet conditions, but perhaps it is another Briton who truly deserves that moniker.

Of Jenson Button's 15 F1 wins, seven of them have come in rain-affected races.

So often in his career, Button has excelled in changeable conditions, particularly on damp tracks where it has not been clear-cut whether slick, intermediate or full-wet tyres were the way to go.

Perhaps no race better exemplified this than the 2011 Canadian Grand Prix - the longest in F1 history at four hours and four minutes - when he charged through the field from last position after 40 of 70 laps to claim an extraordinary victory.

With the 36-year-old Briton announcing that Sunday's Abu Dhabi Grand Prix will be his final F1 race, BBC Sport takes a look at how Button comes alive when the rain falls.

This was the race that really did have it all.

A two-hour rain suspension, five safety cars, two collisions for the winner and six visits to the pits - one of them a drive-through penalty.

Button's progress from 21st after 40 laps to first after 70 was an absolutely staggering feat.

Starting seventh in a race begun under the safety car in wet conditions, he squeezed McLaren team-mate Lewis Hamilton into the pit wall as they entered lap nine and the two cars collided, spraying debris over the track. The incident prompted Button to shout memorably over team radio: "What is he doing?"

Down in 15th 14 laps in after serving a penalty for speeding under the safety car, Button had been the first leading driver to change to intermediate tyres. He set off on his first charge and was up to 11th by lap 17.

Further heavy rain brought the safety car out on lap 20 before the race was suspended on lap 25. When it was eventually resumed two hours later, they had to do another nine laps under safety-car conditions before the track was deemed fit enough to race.

Three laps after the re-start, the safety car was deployed yet again when Button and Ferrari's Fernando Alonso collided on lap 37.

Button was last when the race was restarted on lap 40 but fought his way through the field thanks to choosing the right time to change to intermediate tyres and then dry-weather slick tyres.

He moved from fourth to second on lap 65 by passing Red Bull's Mark Webber and Mercedes' Michael Schumacher and closed on race leader Sebastian Vettel, who wilted under the pressure and ran wide on the final lap to allow Button through for a win that had to be seen to be believed.

Just thinking about it brings the excitement back.

Canada 2011 might not have been Jenson Button's best drive - he rates Japan 2011 higher - but it was far and away the most remarkable.

A four-hour race, including red flags and safety cars. Last with 30 laps to go, second and closing fast on Sebastian Vettel's Red Bull as he started the last. Vettel's wheel a couple of inches wide of the dry line, a half-spin and Button was through to take a win that will be remembered for as long as people talk about F1.

He won all over the world - except at home

Button's 15 wins have been spread out all over the would with victories in Europe, Asia, North America, South America and Australasia.

Perhaps the only lingering regret will be the absence of his home race in Britain from the win list. In fact, he never managed to get on the podium at Silverstone in 17 attempts.

One of the longest waits for a win ever

Button had to wait until his 113th grand prix start for his first win - at the time no driver had waited longer for his maiden F1 victory.

Starting 14th in Hungary in 2006, it was classic Button as he moved through the field in a wet-to-dry race.

His joyous, wide-eyed expression immediately afterwards became one of F1's most recognisable images of modern times...

The high points were winning the title with Brawn in 2009 and the early McLaren years, but the past two seasons under the renewed McLaren-Honda partnership have offered very little to feel encouraged about. He goes into Sunday's final race of the season in 15th place in the standings with 21 points. 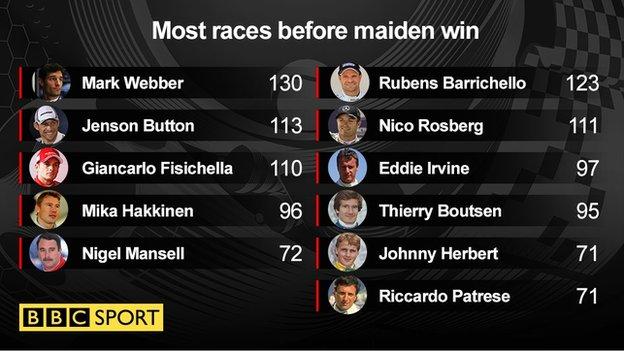 His championship year was a season of two halves with Button winning six of the first seven races before Red Bull-Renault and Sebastian Vettel became the most consistent package from Silverstone onwards.

Button and Brawn just about preserved their lead to secure the championship in the penultimate race of the year in Brazil.