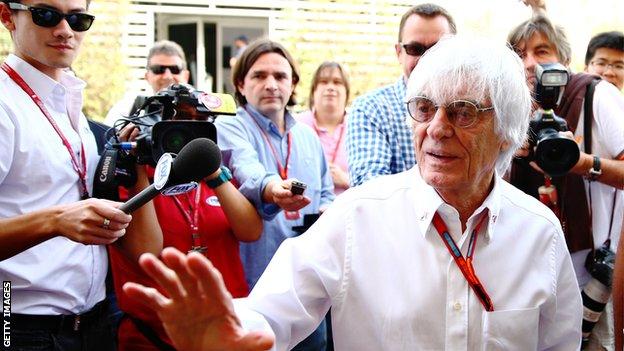 Bernie Ecclestone will "walk away" from Formula 1 if new owners Liberty Media interfere with his running of the business, according to Max Mosley.

The former head of F1's governing body the FIA said Liberty "need" Ecclestone as it learns about its new acquisition.

"These people may take a more active role and they want to sort of run the business but that could bring them into conflict with Bernie," Mosley said.

But he added: "It is much more likely there will be a collaboration."

Mosley, an old friend and ally of Ecclestone, was talking in an exclusive interview with 5 live.

He said he expected F1 to continue as before under the new owners, despite the need for a succession plan for Ecclestone, who is 86 next month.

"There has to be a succession sooner or later unless Bernie's immortal, which I don't think he is," Mosley said. "So I guess this would be part of that process.

"But as far as the overall picture is concerned, I doubt very much that anything is going to change because they bring I would imagine certain sorts of expertise to the table.

"But Bernie on the other hand has this enormous big knowledge of F1 which they certainly won't have so they will need him.

"It is going to be very interesting to see what things they wish to do in addition to what has been done already."

Ecclestone, who said last week he had been asked to stay on for a further three years, has been criticised for failing to embrace the possibilities offered by the internet and social media to expand F1's audience and potentially its income.

Mosley said Ecclestone was "the first person to say he doesn't understand social media and he's not really into the digital age. On the other hand he is very good at keeping the whole structure going."

Mosley said he believed Ecclestone and the new chairman of F1 Chase Carey, who has worked extensively for companies owned by media mogul Rupert Murdoch, would be able to work together.

"If Chase Carey is a person of real ability and he wants to understand and he's clever, I think he'll get along fine with Bernie," Mosley said.

"Most of the people Bernie has not been able to get on with, it's because they are not up to the level at which he operates."

Liberty has said that part of its plans to change F1 will be to offer the teams the chance to buy shares in the sport.

But Mosley, who was FIA president from 1993-2009, said he believed this was a mistake, saying that "every time that has happened in any other form of motorsport, it hasn't worked - you have examples of that in America".

"Really what you need (is) an independent body making and enforcing the rules and it is up to them to make it attractive to the teams on the one side and the spectacular on the other. So I think the teams having a say is wrong.

"And the big difficulty at the moment is that Bernie runs the commercial side of F1 and the sporting side is supposed to be run by the FIA. And from the outside - and I am not involved now - it would appear that the sporting side is not run quite as carefully and in such detail as perhaps it should be."

He criticised his successor as FIA president, Jean Todt, for not following through on a promise he made before being elected that he would introduce a commissioner for F1.