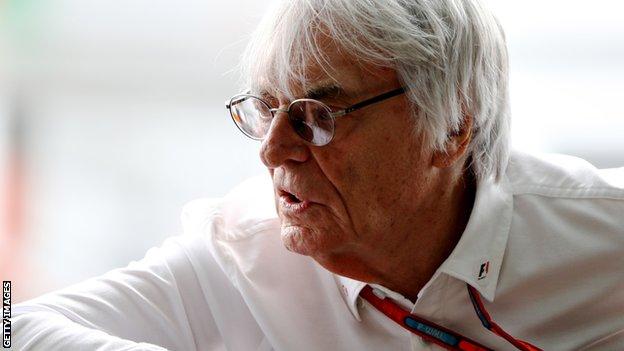 The end of Bernie Ecclestone's stewardship of Formula 1 has appeared close on a number of occasions over the last few years, so it is with a degree of caution that one discusses the latest episode that may seem to signal it again.

But the likely takeover of the sport's commercial arm by US giant Liberty Media does look like one of those occasions that could well signal the beginning of the end for a man whose diminutive stature belies his giant influence over the huge arena he has dominated for 40 years.

The smart money in F1 says Liberty will not divest themselves of the 85-year-old's influence immediately and that Ecclestone will stay on for a while, even if it is only to allow some form of transition.

Meanwhile, his remarks to The Times that he will "say adios" if he does not like the "noises" coming from the new bosses are a reminder that he likes to be in control. It is the very essence of the way he has run the sport all these years.

But whether Ecclestone is kept on in the interim or not, his time at the top of the sport must surely be running out - if only because of the inevitability of time passing.

When he does finally go, it will signal the end of one of the more remarkable careers for administrators and impresarios in any sport.

During his stewardship, Ecclestone has turned an essentially niche activity into a global phenomenon, a sporting spectacle whose reach is surpassed only by the Olympics and football World Cup.

His success in doing so is beyond doubt, but even before the Liberty takeover, uncomfortable questions were being asked about whether the time for change was not already overdue.

Ecclestone has been reluctant to embrace the internet age, and even now seems to struggle with the concept of how to move on from his tried and tested formula - or even accept whether he needs to.

His success was built on a simple plan based around selling F1 as a complete package to a major broadcaster in each country for the highest possible amount.

Significant revenue was also secured by extracting fees so large from race organisers for the privilege of hosting a grand prix that it has become almost impossible to stage one without support from a national government.

This creates an annual global revenue in the region of $1.5bn but younger minds in F1 wonder whether it should be much larger given the sport's reach. Some have talked about reshaping the model for the digital age.

Under Liberty that seems inevitable, but how successfully it is done remains to be seen.

Even as F1 is poised for a takeover that values the sport at $8.5bn, there are questions about just how healthy the sport really is.

Apart from Mercedes, Red Bull, Ferrari and McLaren, pretty much all the teams are struggling to make ends meet.

Many races in Europe, the heartland of the sport and its main fanbase, are struggling to meet Ecclestone's high demands - even if historic races such as Silverstone and Monza attract huge attendances and TV figures are holding up well in traditional markets such as Britain and Germany.

Meanwhile the 'new' races, many in countries with questionable regimes, struggle to attract spectators and create a decent spectacle.

The need to satisfy the demands of owners CVC, a private equity group, has meant F1 is increasingly moving away from terrestrial television in favour of pay channels.

This inevitably shrinks the audience, raising questions about how it will attract younger fans.

These declining audiences have led to new regulations for 2017 aimed at increasing the sport's apparently diminishing appeal - but it is questioned whether the rule changes will actually achieve what is intended.

F1's tyre supplier has been chosen owing to its willingness to pay large amounts of money and bend to Ecclestone's demands rather than its product satisfying teams and drivers.

Those tyres have had a questionable effect on the racing, guaranteeing pit stops and differentiations of pace while preventing drivers from pushing to the maximum as they have in the past.

After six years, this has finally been recognised as a problem and there is a new tyre design for 2017. Again, though, it remains to be seen whether it works.

Addressing the issues Liberty bosses will find in their in-tray will not be easy.

That said, the group only wants to buy F1 because of the level Ecclestone has taken it to.

He started his involvement with the commercial side of the sport in the early 1970s, when he owned the Brabham team.

The path to his current position began when he offered to look after the team's commercial relationships with key outside bodies - the circuits, governing body, and particularly negotiating the television rights, which had previously been handled on a haphazard race-by-race basis.

It's unlikely Ecclestone foresaw then the billion-dollar business F1 would become, but he certainly recognised the chance to make a lot of money, and wasted little time in building his influence.

He persuaded television companies to buy F1 as a package, rather than pay for individual races. That vastly increased exposure, and the sport's popularity grew, at first slowly then increasingly quickly.

The system endures to this day; in exchange for being granted permission to run the TV rights, he gave the teams an annual payment.

Already very rich, the sheer scale of his current wealth - he is reputed to be worth more than £2bn - arose from two key decisions made by the sport's governing body, run at the time by Ecclestone's friend and long-time associate Max Mosley.

The first, in the mid 1990s, meant Ecclestone's own company became the rights holder of F1, taking over from the teams' collective body Ecclestone previously ran.

The second, in 2000, granted Ecclestone the commercial rights to F1 until the end of 2110 for a one-off fee of $360m. Even then, many were shocked by the relatively paltry amount of money that changed hands to secure such a lucrative and lengthy deal.

Some of the teams opposed the granting of the TV rights, saying they were being robbed. But the complainants were eventually bought off, and he set about monetising his new asset with a dizzying number of deals that sold the rights through a series of companies.

One of the many financial transactions that led to F1's current ownership was the sale by German bank BayernLB of its 47.2% stake in F1 to CVC in 2006.

This ultimately led to the court cases on bribery charges that Ecclestone fought and survived a couple of years ago - and which he ended by paying the German courts $100m to end the case, without a presumption of guilt or innocence.

More than a few people marvelled at the perfectly legal arrangement that allowed a man charged with bribery to pay to end a criminal trial.

Those court cases were the biggest threat to Ecclestone's position, but have not been the only ones - some arising from the ill-advised public comments he occasionally makes.

He has referred to women as "domestic appliances", praised Adolf Hitler for "being able to get things done", and suggested it would be a good idea if Vladimir Putin ran Europe. That he wasn't sacked for any one of those remarks is a reflection of his ability to make money for his employers.

However in recent years CVC has hinted at less tolerance while his ability to run the sport unchecked has diminished as the manufacturers have worked together to ensure he cannot run amok.

Ferrari, Mercedes, Renault and Honda joining forces in 2014 to prevent him dumping the expensive but revolutionary turbo hybrid engines is one example.

Despite his flaws, he remains a skilled deal maker and if the Liberty deal is to prove the development that finally sees Ecclestone off, replacing him will not be easy.

The likelihood is a more corporate structure will be adopted, with a chairman and bosses of the various arms of the company working together to do what one man has run largely singlehandedly for the last few decades.

When Ecclestone does ultimately leave, F1 will clearly evolve.

A US-based media group is likely to want F1 to have more of a foothold in America than just one race in Texas, a move that will compromise Ecclestone's preferred modus operandi of simply finding someone rich enough to put up the money for a race.

A more equitable distribution of revenue to the teams would increase F1's stability, and a US-style franchise system guaranteeing their position would take that a step further.

The possibilities of the internet and social media to grow the audience will surely be pursued with much more vigour too.

Whenever he finally goes, one thing is certain - F1 would not be what it is today without the efforts of this remarkable man.