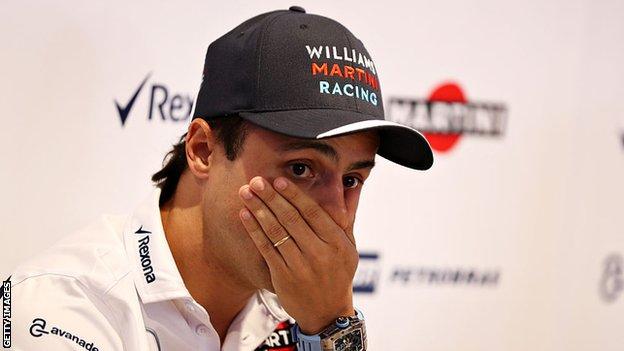 Felipe Massa wiped away a tear as he received a sustained round of applause after announcing that he would retire from Formula 1 at the end of the season.

It was a reflection of the warmth felt towards this cheerful, likeable man throughout a sport that has provided him both ecstasy and agony in pretty much equal shares for the last 15 years.

Massa, 35, can look back on a career in which he has driven for two of the sport's greatest teams, won 11 grands prix and come within a sniff of the world championship.

Massa lost out on the sport's greatest prize to Lewis Hamilton in 2008 in the most agonising circumstances - for a few delirious seconds after crossing the line in his Ferrari to win his home grand prix, the Brazilian thought he was world champion. As did his father celebrating manically in the Ferrari pit.

But then Hamilton passed Timo Glock's Toyota at the final corner of the final lap, and moved into the fifth place he needed to snatch the crown by one point.

Massa can look back on that season as the year that his career reached its zenith.

Ferrari had the best car, he had the better of team-mate Kimi Raikkonen and he would have been champion but for a couple of moments of terrible luck.

If only his Ferrari's engine had not failed while he was leading three laps before the end of the Hungarian Grand Prix.

If only he had not driven away from his pit with the fuel hose still attached while leading the Singapore Grand Prix.

Massa never again attained those heights. In 2009, Ferrari were uncompetitive, and then in Hungary he was lucky to survive the most bizarre of incidents in qualifying.

Massa was struck on the head by a suspension part that had come loose from a rival's car - ironically that of his close friend and countryman Rubens Barrichello. He suffered a fractured skull and for a few hours there were questions over whether he would survive.

He did not race again that year, and when he came back in 2010, Raikkonen was gone and Massa had a new team-mate, Fernando Alonso, who provided a whole other level of challenge.

Alonso is a dominant character as well as one of the greatest drivers ever to grace F1, and Massa found himself increasingly cast into a supporting role.

This happened organically throughout their first-half season together, by virtue of Alonso being faster, and then was made explicitly clear when Massa was ordered to hand victory in the German Grand Prix to his team-mate, to help Alonso's title bid.

The radio messages giving the order were spoken in code to avoid breaking the ban on team orders that was then in force. To Massa from his race engineer Rob Smedley, they have passed into folklore, made Smedley a superstar and ironically enhanced the driver's standing.

"OK, so, Fernando is faster than you," Smedley said deliberately. "Can you confirm you understood that message."

Just as in Brazil two years before, Massa handled the most difficult of situations with dignity and won himself a new legion of fans.

Four years with Alonso confirmed what a season with Schumacher had suggested in 2006 - Massa was a very good Formula 1 driver, but not a great one.

Not only did the Spaniard and the German have access to a turn of speed beyond Massa's capabilities, they had other attributes - consistency, fierce intellect, the ability to dominate a team - that also escaped Massa.

Massa was well aware that he was was facing a rival he could not match on all but rare occasions.

"Fernando is the top driver," he said, "and to beat him you need to be on the level of perfect - if you're not, even in one little way, you will be behind him."

Like so many things in his life, Massa handled this knowledge - and the unenviable task of being professionally beaten up most weekends - with humility and class.

But when Massa was on it, on a good day, there were few faster.

It takes a special person and a more-than decent driver to survive at Ferrari for eight seasons. Eventually, at the end of 2013, the team finally decided they needed a new partner for Alonso, who they correctly feared was running out of patience with them and might leave. As indeed he did a year later.

By then, Massa had moved to Williams for what proved an almost-golden twilight to his career.

Massa needed Williams as badly as they needed him. The once-great team were about to come out of a slump and Massa required somewhere to rebuild his career, when other teams were not exactly falling over themselves to sign him.

In 2014, there was even a pole position - in Austria - and last year he led a race for what is almost certainly going to prove the last time, at Silverstone, after a lightning start from the second row.

There have been no wins, and the powers of both team and driver appear to have dimmed this year. But there can have been no better place for such a popular man to end his career than with a team whose warmth and likeability matches his.

"It's a very sad, emotional day," said Williams deputy team principal Claire Williams. "This is a big decision Felipe has come to and he was terribly nervous before he came out here.

"He's what we love at Williams - a true gentleman. We were so lucky he honoured us to come and drive for us.

"We were in dire straits and we needed someone like him. He has been a big part of the success we have had over the last three years, not just with his talent but with his personality."

Massa is an essentially modest man and he is well aware of where he stands in F1's pantheon.

"It was very difficult to decide to stop," he said. "But you just need to listen to what your heart is saying to you.

"To be in F1 for 15 years. I am very proud to have been here so long. Even if I lost the championship by one point, I managed to achieve many dreams. I achieved more than I ever expected."

'Thanks for all the years' 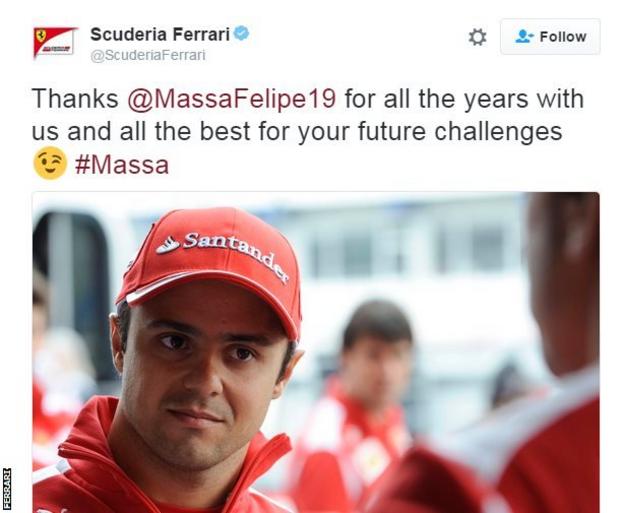