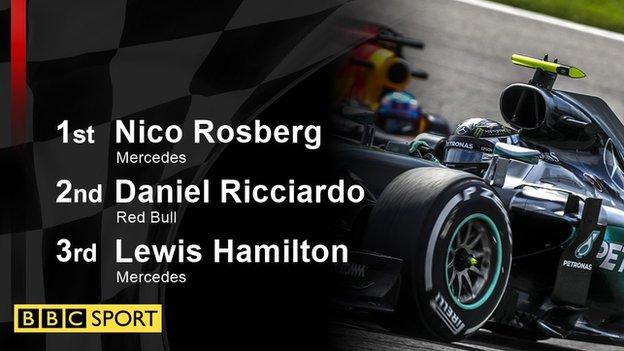 Lewis Hamilton recovered from the back row of the grid to finish third at the Belgian Grand Prix as Mercedes team-mate Nico Rosberg won a dramatic race.

The German's victory from pole position in a race punctuated by a violent crash for Renault's Kevin Magnussen reduces his points deficit to Hamilton to nine.

Magnussen was taken to hospital with an injury to his left ankle after a huge crash at 180mph at Raidillon.

How did Hamilton do that?

Hamilton started in 21st place on the grid, after a raft of engine penalties resulting from failures early in the season. His partner back there in probably the most talented back row in F1 history was his old rival Fernando Alonso, who used three engines this weekend.

The two made brilliant starts to the race to pass the pits for the first time with Alonso in 11th and Hamilton 13th, helped by a chaotic first lap ahead of them.

A concertina accident between the two Ferraris and Max Verstappen's Red Bull left all three with damage at the first corner and dropped them down the field - and further back McLaren's Jenson Button was taken out when Manor's Pascal Wehrlein smashed up his rear at Les Combes.

Starting on the medium tyres, Alonso and Hamilton moved up as others stopped in front of them on their softer rubber and were in fourth and fifth on lap eight, when Magnussen lost control through the final part of the Eau Rouge swerves.

Ouch, that must have hurt

The Renault spun and smashed into the barriers on the outside of the track, the Dane's cockpit head protection material flying out of the car in the violence of the impact.

He limped away from the accident but an investigation at the medical centre showed him to have an injury and he was taken to hospital.

Magnussen later tweeted that he was on his way home with a sore ankle and would be fine to compete in next weekend's Italian Grand Prix.

The accident destroyed the barriers at one of the most dangerous parts of the track and the race was red-flagged after two laps behind the safety car to give marshals time to repair them.

The red flag reset the race, with everyone allowed to change tyres, and it appeared as though Hamilton might now have the chance of an unlikely victory.

But although he quickly passed Alonso's under-powered McLaren-Honda, it took him until lap 18 of 44 to find a way past the similarly Mercedes-powered Force India of Nico Hulkenberg.

Three laps later, Mercedes brought him in for a new set of tyres, putting him out of sync with those around him and on a different strategy, the idea being to try to attack Ricciardo on fresher tyres in the closing laps.

Hamilton closed up on Ricciardo before his final stop on lap 32 but was unable to pass him and rejoined between Hulkenberg and his team-mate Sergio Perez.

That left Hamilton too much to do to try to catch Ricciardo, who was able to control the gap to the end.

Nevertheless, Hamilton was pleased to have limited the damage to his title bid as he expected to find it difficult to get into the top 10 and score points in this race.

Rosberg, meanwhile, delivered what he needed to do on a weekend that was less of an open goal than it might have appeared because of the difficulties caused by fragile tyres, influenced by what many unhappy drivers felt were "ridiculously" high pressures.

"Daniel was quite quick in the beginning of the second stint, but generally I had it under control," said Rosberg. "The car was awesome and Lewis was not there to battle it out."

What happened to Alonso?

Alonso fought as well as he could in the McLaren, whose Honda engine is well down on power compared with the rest.

He hung on to Hulkenberg until their final stops, made together, and McLaren worked wonders to have them out of their boxes side-by-side, Hulkenberg just holding on at the exit.

Alonso was vulnerable to cars coming from behind him and was literally powerless to fend off Perez and a recovering Vettel but managed to hold on to seventh place ahead of Williams' Valtteri Bottas and Raikkonen.

The Finn was angered by the defensive driving of Verstappen early in the race, swearing on the radio in the latest of a series of spats between the oldest and youngest drivers in F1 this year.

The Dutchman finished 11th, a disappointment for the 20,000 fans who had come from his native country to cheer him on.

His failure to convert a front-row start into a strong finish was a direct result of the first-corner crash.

It happened as Verstappen tried to recover from a bad getaway to dive back down the inside of Raikkonen into La Source.

The Red Bull was way across the inside kerb, with Raikkonen on his outside, as Vettel swept into the corner from the outside line.

The two Ferraris touched, Raikkonen hit Verstappen, and all three cars needed to stop at the end of the lap to repair the subsequent damage.