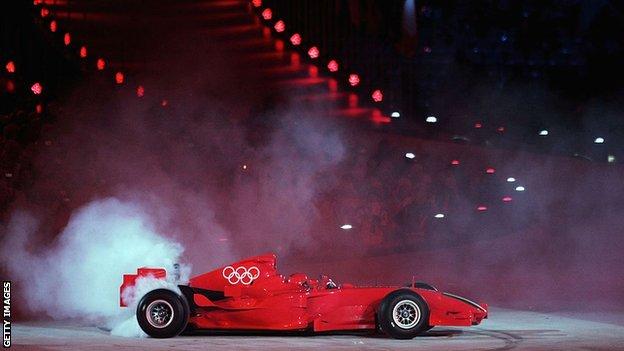 Formula 1 in the Olympic Games may sound like a ludicrous concept, but it could just work.

Really. Stick with us on this one.

In many ways, F1 is made for sport's greatest event, with its podium denoting first, second and third, and the International Olympic Committee formally recognising motorsport's governing body the FIA in 2012.

How could it possibly work?

A one-off race where everything is on the line. Not long game, no world title, no points - just pure racing.

In keeping with the Olympic spirit, all the cars would be identical. Whether that's a grid full of Ferraris, Mercedes or another team entirely doesn't really matter.

Drivers would compete for their country in their national colours. Imagine Lewis Hamilton and Jenson Button representing Great Britain, Sebastian Vettel and Nico Rosberg in the black, red and yellow of Germany and Fernando Alonso and Carlos Sainz proudly racing under the Spanish flag.

And, in common with each individual event in athletics, a country could enter a maximum of three drivers.

We're salivating at the prospect already.

Wouldn't Hamilton be on holiday?

We're pretty sure he'd be able to fly over, especially if his celebrity friends were involved - Stella McCartney has designed the Team GB kit for Rio, having also done so for the London Olympics.

Given he has a real passion for fashion, attending a number of shows in recent years, surely Hamilton would be thrilled to race in an F1 car with a livery created by one of the world's leading designers?

F1 and fashion - a perfect marriage for him.

But the Olympics is about human endeavour, not engineering...

OK, we accept there are valid arguments about why F1 is not suited to the Olympics, and many, many people would find the idea unpalatable.

The Olympics used to be for amateur competitors, but that concept has long been consigned to history.

And surely there would be something to be admired about some of the world's richest sportspeople competing for nothing but the glory of victory?

Regarding the use of cars, let's remember equestrian events have long been part of the Olympic programme.

As the F1 journalist Joe Saward wrote in 2012, what's the difference between horsepower and horsepower?

Where would they race?

Easy. Interlagos, Sao Paulo. That's if you are talking about this Olympics. It's already on the F1 calendar, frequently provides thrilling racing and is 'only' 275 miles or so from Rio.

And before you say, 'That's not in Rio'... neither were the sailing events at London 2012. They were in Dorset.

This year's Olympic hosts, Rio, did have a circuit that would have been perfect for the race - the Autodromo Internacional Nelson Piquet, which staged the Brazilian Grand Prix until 1989. That, though, was demolished in 2012 to make room for... the Rio Olympics, of course.

And it could work for the next Olympics, too - in Tokyo in 2020. The Fuji Speedway - home to the some epic Japanese Grands Prix back in the late noughties - is only 80 miles away.

Oh really? It's been it there before. Sort of. Certainly a sport that could be described as an early form of motorsport has - chariot racing.

Part of the ancient Olympic Games, chariot racing involved drivers who would compete in a race usually consisting of between seven and 12 laps.

Much like F1, corners would provide plenty of the excitement. Collisions would occur as competitors attempted an overtake, sending debris flying everywhere.

The similarities didn't end there, with charioteers competing in teams - red, white, blue and green.

The sport even had its own Michael Schumacher.

Gaius Appuleius Diocles started racing at 18 and retired at 24, winning 1,462 of the chariot races he competed in.

He also amassed the sort of wealth Hamilton could could only dream of. According to Classics professor Peter Struck, he earned the equivalent of £9.6bn in prize money to make him "the best-paid athlete of all time".

Technically, an Olympic Games Grand Prix has happened before. That was how the 1992 Spanish F1 race in Barcelona was described, less than three months before the city staged a memorable summer Games.

Nigel Mansell won it in his world championship year so we presume that makes him the 'defending' Olympic champion.

No medals were awarded though.

Not convinced? Well, they let skateboarding in...

The BBC Sport judges have even decided the line-ups for the competing nations...